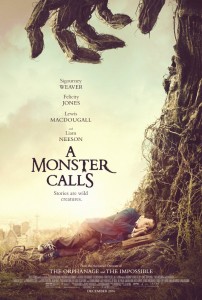 When a seasoned actor like Liam Neeson tells you that his latest film made him cry you not only sit up and take notice but you realise that as a cinema lover you are about to watch a film that really means something.

Long before he was chasing bad guys in Taken or taking on Jedi skills in Star Wars Neeson worked on some of the most emotional films that Hollywood has ever seen – from the brilliant portrayal of a man overcome with grief during World War II in Schindler’s List through to Gangs Of New York and Les Miserables… Neeson knows a thing or two about films that are going to emotionally affect their audience.

When Neeson sits down to talk about his brand new film A Monster Calls – in which he voices the monster – his excitement and commitment to the film are clearly evident and you can tell that this wasn’t a film that he needed much persuading to be involved with. “It’s magical realism,” he says with his eyes lighting up. “It’s a fable about the complexity of our emotions, and how we navigate that complexity as we are growing up. The film is as rich and as imaginative as the book is – it’s quite a cinematic achievement. The subjects that the film deals with are how to grow as a young boy and how to handle very, very complex emotions, especially when a lot of those emotions deal with loss, death and it looks at where you fit in the world – especially when you are at school, and we have all been through that and we have all have tales to tell. The book and the film both very, very beautifully navigates you through this web of heavy and extreme and grey moral issues that all young boys and girls are confronting these days.”

Even Neeson’s role is very much full of subtext and is perhaps the most important character in the entire film. “I plays a character called The Monster,” he explains. “He is conjured up in our young heroes mind. He is like thirty metres tall, he is huge. He comes from the Earth and he is essentially made of the Earth – timber and trees – ancient trees at that – and he represents the universe.”

Neeson is quick to admit that one of the reasons why he wanted to be part of the film was because it had director, J.A. Bayona, at the helm. “I saw two of his films – The Orphanage and The Impossible – and they kind of blew me away. I thought ‘wow here’s a real cinema talent.’ So when I heard that he was doing Patrick Ness’s book A Monster Calls, which I had read, I thought that was a marriage made in heaven right there. Working with J.A. Bayona has been one of those unique experiences that you don’t come across very often. I’ve done 63 or 64 films and every so often you work with a director who just takes you into their world and takes you into the world of the film that they are shooting, He eats, sleeps and drinks films – film and cinema – he’s a little walking encyclopaedia – in fact he is very much like Martin Scorsese. He takes care of you as a director, he nurtures you – he nurtures the performers in the scene, he even nurtures the scene. He allows you to experiment and he just wants you to get to the truth of what the scene is and he will takes as long as it takes to get there and I love working with a director like that.”

With a film that has obviously left an impression on Neeson himself he has no trouble explaining what he thinks audiences will be left feeling after they have viewed it. “It think audiences will be stunned by the technical achievement of not just the motion capture but how it integrates with the story and it is a very moving story, a very, very beautifully written story and it has been very beautifully acted. There is some comedy in it but I think audiences will connect with the emotion in a very, very big way.”

The beautiful and moving A Monster Calls will be released in Australian cinemas on 27th July.