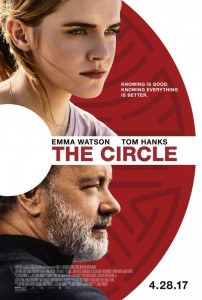 A few years the world scoffed when they heard that a film set in the world of social media was about to be released. Those scoffers were soon eating their words because The Social Network ended up being not only a worldwide hit but also a critically acclaimed film. Well now the social media world is getting another go on the big screen with – The Circle.

Labelled as a dramatic thriller The Circle sees Emma Watson (yes Hermonie from the Harry Potter franchise, but she does have a fair body of work outside of that now) play Mae a young woman who lands her dream job at a social media company called The Circle. There she is taken under the wing by Bailey (Oscar winner Tom Hanks) and soon finds herself engaging in groundbreaking experiments that push the boundaries of privacy. Heavy Mag caught up with Hanks and Watson just to see what is behind this film that will hit cinemas in Australia in August.

Hanks begins by telling that his character, Bailey, is one of the main people behind The Circle. ‘Bailey is one of the three founding fathers of The Circle,” Hanks explains. “He is the visionary, the ideas man, not the financial guy, not the tech guy… he is the guy that dreams big. The Circle is that great thing that the internet hopes to be and wants to be but dear God I hope it never becomes. It is what would happen if you took of the great companies and all of the great ideas – if you took Google and Amazon and Apple and Facebook and Uber and jammed it all into one entity, that is what The Circle is. The Circle is once you’ve become a member, once you’ve entered The Circle everything you need to is in one house on one tablet or one phone. You never have to give faith or allegiance to anyone outside The Circle because The Circle will take care of all of your lifestyle needs.”

It is clear while talking to Hanks that it was the fact that James Ponsoldt was directing that encouraged him to be part of the movie. “He has a very real gift for capturing real life inside the super structure of what the movie has to be. His willingness in the movie to just let people explore, almost to the point of straying, but not quite to the point of that, but just to see where the human behaviour would take to get you there, and I think that is his strength and we all leapt at it… especially on the power of this movie.”

Hanks is also full of praise for his co-star Emma Watson. “Emma is phenomenally untouched and grounded in a lot of ways but she is brilliant at knowing what to do when making movies. I mean she did all those Harry Potter movies so she understands very complicated film making. She also knows that none of that really matters unless you are going to be able to inhabit the moment and her ability to inhabit the moment is pretty profound.”

Like Hanks Emma Watson says one of the reasons that she chose to do the film was because after first reading the script it really won her over. “It really stuck with me,” she explains. “The story, the questions that it raised I found that weeks later they were still there and I was pondering different aspects of it and I think that is a good sign for a story or something that I might potentially work on. It doesn’t leave you quickly. I think Mae finds herself having these big dreams and these big ambitions and she is like ‘WOW, I’m twenty-six and I’m living with my parents, I don’t have enough to pay for my health insurance and I’m working in a job that doesn’t challenge me and doesn’t mean anything to me… is this my life?’ When Annie, her friend, offers her the chance to have a job interview at The Circle this is like this is her ticket, this is her escape and this is her chance to be able to take care of her family. She has this sense of powerlessness is her life and somehow The Circle gives her control and also hope for her future so it’s a very powerful promise that The Circle kind of gives her.”

However, everything doesn’t end up being rosey for Mae while working at The Circle and Watson says that is something that Mae doesn’t see coming. “The expectations that are put on the employees at The Circle are that every aspect of their life will be shared and the socialising that you would normally do has to be done at The Circle within The Circle because The Circle has found a way to commercialise every aspect of people’s lives. So every bit of data, all of that money, all of that content and content sharing that want to have happening on their network. So it becomes a very claustrophobic environment very quickly.”

So would she say the film has a lot to say about modern society and in some way a personal story? “I think the film is about today’s society,” she explains. “You know this isn’t some kind of dystopian future that is a long way off, this is a story that could be happening now. So I think it is incredibly topical and speaks to this moment now. As someone who has been in the public eye since I was very young. I always thought the boundaries between public and private were important, and I think even more so playing this role and exploring this world made me think about it even more than I ever had before. I think that is what is great about this film, it’s not there to preach or to give a certain perspective on it. It forces the audience to ask questions and to ask themselves questions and I think that is the key really – what is difficult about the situation that we are in now is that we give our information away so freely with so little thought any more and I think people will think more about these questions having seen it.”

The Circle will be in Australian cinemas in late August.