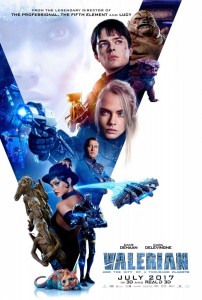 One of the more interesting films to hit Australian cinemas this year is Luc Beeson’s latest sci-fi epic – the rather lengthy titled – Valerian And The City Of A Thousand Planets. Like all of Beeson’s films this is a film that feels like it takes an audience on a beautiful but epic journey. Once again Beeson has created a magnificent universe in which to immerse his audience.

Starring in the film this time around are youngsters Dane DeHaan, from films like Chronicle and The Amazing Spider-Man, and Cara Delevingne, from Paper Towns and Suicide Squad. They appear alongside R ‘n’ B star Rihanna and seasoned actors like Clive Owen and Ethan Hawke.

As we start to explore the world of Valerian Delevingne begins by telling us about why she wanted to play the character of the rough-and-tough space cop Laureline. “The thing that drew me to the character of Laureline most is her strength,” she explains. “She is so intelligent, hard-working and determined and she isn’t scared to speak her mind. You know, no matter how big, small or alien the place she is in she will overcome her challenges. Laureline basically has the knowledge of Alpha (the space station/planet they live on), she basically knows everything. She knows all the different aliens, she knows all the different codes. Valerian (Dane DeHaan’s character) kind of goes into everything head-first without really thinking about things whereas Laureline figures them out with strategy behind it all.”

Over the years as a director and a screenwriter Luc Beeson has brought a number of strong female characters to the screen so what was it like for an actress like Delevingne to work with him? “Luc is definitely known for his strong female characters,” agrees Delevingne. “Getting to work with him has been an absolute dream for me. Every movie that he has ever down is one of my favourite films so to see this movie come to life is another ‘pinch me’ moment. I really hope that young girls and women see this movie and take away the fact that Laureline is extremely hard working and is a strong space cop. She is just as able to do everything as Valerian is able to do.”

Laureline is Valerian’s love interest and of course space-cop partner and bringing the cocky character to life is young actor on the rise – Dane DeHaan. Coky is a word that DeHaan readily agrees sums up Valerian. “Yeah Valerian is a pretty cocky space agent,” he says laughing. “He is pretty sure of himself. He has a perfect track record and he is pretty good at what he does but what he doesn’t realise is that there is a lot of luck in what he does and that he would be nothing without Laureline. We are definitely a dynamic duo and he has a very big crush on Laureline, he would love to spend the rest of his life with Laureline, but also I don’t think he realises just how important she is to his succsess as a crime-fighting space agent.”

Like Delevingne DeHaan was also excited about being able to work with Beeson. “It was the phone call that every actor wants to get – that a visionary director is making THE movie that he has wanted to make his entire life and he wants you to star in it. It’s my first go at playing the straight up hero, which is exciting for me because I am always trying to do different kinds of things So for the role there is something delightfully fun about it , but the movie I knew was just going to be so special and epic and you know when I was reading the script, there was all these aliens and new worlds, and it was an opportunity that I definitely couldn’t pass up.”

DeHaan again laughs when he is asked whether he felt heroic when he first put on the pretty impressive space suit that Valerian wears. “When I first put on the space suit I felt heroic for sure,” he says. “But you know it wasn’t until they turned the lights on on the space suit that I think every sunk in then. And then I felt super cool and I felt like Valerian for the first time. You know the suit is amazing but you know it goes to a whole new level when they turn those lights on so that was the most special moment for me.”

It is incredible world that Beeson has created for Valerian And The City Of A Thousand Planets and that was something that also impressed DeHaan. “In Valerian the year is 2763 and outer space has become a place where both aliens and humans can live and co-habit peacefully together, and the place where they can do that the easiest is on Alpha, which is the city of a thousand planets. It is like the Space Station of today has just grown and grown and grown for seven hundred years and human beings have made contact with aliens from all over the universe and ten thousand species of aliens and human from all over the world have come together and peacefully living together on one Space Station – and that is the city of a thousand planets and that is where a huge chunk of the movie takes place.”

Of course Valerian and Laureline are a dynamic duo and of course love interests for each other so how did DeHaan find working with Delevingne? “Cara is just so much fun,” he says smiling. “She is such a pleasure to be with on-set because she always brings this really fun energy and I am the kind of person that can take themselves too seriously, but whenever Cara would show up on-set I would just light up, loosen up and then just have a really good time. That was so important, especially with this movie, to have somebody like that – to have somebody that I could trust in but also joke around with and just have a great time with through this whole process.”

With DeHaan being so open about the movie we had to ask what was some of the biggest challenges of tackling a movie of this scale and intensity. “The blue-screen was definitely one of the biggest challenges,” he says after thinking for a moment. “Just having to use my imagination with it was challenging. But it was also one of the most fun things as well. I also had to stay in physical shape for the move as well, I would start my mornings every day in the gym for a couple of hours with my trainer and that was you know to stay in shape to do all of the stunts and scenes and everything but also it would just pump me up for the day. Valerian is probably somebody that is always a little more upbeat, cocky and a little bit more of a bro than I am in real life so just going to the gym and doing that every day was a challenge but also prepared me for the day. It certainly got me in the right state of mind.”

Valerian And The City Of A Thousand Planets opens in cinemas on the 10th August.

Tagged: Cara Delevingne, Dane DeHaan, Valerian And The City Of A Thousand Planets