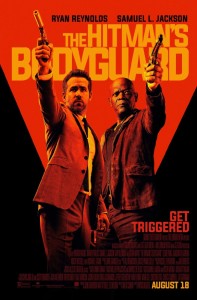 Few trailers have had people talking as much this year as the trailer for The Hitman’s Bodyguard – let’s face it if you’re an action junkie then this is going to be one of the best films of the year. The film sees Ryan Reynolds team up with action star Samuel L. Jackson.

Directed by Australian director Patrick Hughes, who showed enough with his debut film Red Hill to find himself in charge of The Expendables 3, The Hitman’s Bodyguard sees the legend himself Samuel L. Jackson play a character that needs to be protected by Reynolds, an actor who has shown in recent years that he is no slouch when it comes to action either – think Deadpool and Safe House for some of his best action work.

“I play a guy called Michael Bryce who suffers from extraordinary hubris,” says Reynolds with a huge grin on his face. “He is an executive protection agent, he is a self-proclaimed Triple A rated executive protection agent. Early on in the movie he loses a client and that sends him down a kind of shame spiral – his life then sort of unravels and this superficial existence that he had is all kind of lost. When we find him at the beginning of the film he is still actually believing that he is a much lower-rent protection agent, but he is still the best in the business he’s just taken a little bit of a fall from grace. He is then asked by a former flame of his, somebody that he used to be really in love with or perhaps still is, named Amelia from Interpol for help, she needs his services immediately. She’s not really asking him for his services she is telling him. So he complies, shows up and finds that his charge is a hitman who he has had a number of encounters with in the past so in a nut-shell my job is to protect a man who has spent the better part of a decade trying to kill me. These guys couldn’t be more polarised when we meet them but as we move through the film they both seem to get a begrudged love and respect for each other, and it is a love story. To me that is the story of the film – it is a love story wrapped in this whole crazy, zany action set-piece.”

Reynolds says when he first read the script he knew exactly who he wanted to have starring alongside him in the film. “Early on when I read the script the first thing I said to my agents was can we get Sam Jackson because I’d done an animated film with him years ago called Turbo and they paired us together for the junkets and we had great chemistry and I remember making a mental book note at the moment and thinking ‘oh if I ever find a kind of two-hander movie this would be a good guy to do it with and it proves in my opinion that we were right. We have a good thing going – and I think that is nice.”

Early critics screening of The Hitman’s Bodyguard has seen critics talking about the fact that this isn’t just your average action film and that is something that Reynolds agrees completely with “There is a certain heightened tone to this film and I think the audience are going to be excited to see that we embrace that tone in a wonderful way,” he explains. “You can have these amazing action sequences but they aren’t really ladened down with these depressing emotional spirals they are all kind of uplifting and fun, and you know every set-piece is very unique, it has its own beginning, middle and end and I think audiences are going to find it is one of those movies that just zips past so much that when you get to the end you’re like ‘what… I want thirty minutes more. I want to see these guys together more.’ At the end though we take them on a real adventure.”

Teaming up with Reynolds and Jackson in the film is Salma Hayek who moves away from some of the comedies that she has been doing recently – Sausage Party, Grown-Ups etc – and one again returns to the action genre. Here she plays Sonia – the wife of Samuel L. Jackson’s hit-man character, Darius.

“Sonia is a fantastic character,” says Hayek when she is asked to explain her character. “She is a married woman but her marriage is a little bit unusual because she is married to a hitman and she is not an outlaw but she is really, really tough. If anybody can handle by husband who is insane and very, very dangerous it is definitely Sonia. Everything that happens happens because Darius is in love with me, and he is so in love with me that everything he does is to prove his love for her. So it is really a love story and they have this amazing, wonderful, passionate, crazy relationship and even in the few moments where you get to see it it’s insane and romantic and full of fire in every way. You definitely get a glimpse of the fact that this woman is his match.”

For Hayek she says one of the highlights of working on The Hitman’s Bodyguard was certainly getting to work with Samuel L. Jackson. “I love Sam,” she says laughing. “I had been a fan for many, many years. He’s a legend and I was so excited that I got a chance to work with him and it ended up being so easy and it’s been fabulous to be his wife – his crazy, crazy wife – and she is very unpredictable and in a way very volatile, but he is still very solid, he is still a very stable character but with her you never know what she is going to say – you never know what is going to come out of her mouth. I think that is what makes her special. One very special trait of my character is that she has the dirtiest mouth of any character that I have ever played, and I have played characters with dirty mouths before. I say so many dirty things, bad words and I repeat them one after another and I have to say I love her. She is cuckoo but I love her.”

The Hitman’s Bodyguard is screening now.