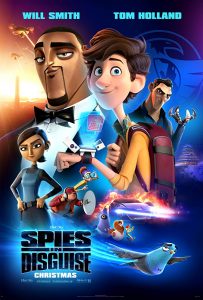 Summary: When the world’s best spy is turned into a pigeon, he must rely on his nerdy tech officer to save the world.

OUR SPIES IN DISGUISE REVIEWS & RATINGS:

A film where a super-hero turns into a pigeon shouldn’t work, no even the notion of such a film would probably have you laughing and wondering whether or not the film deserves to be placed in the same pile as the ridiculous Sharknado. But let the laughter subside because somehow Spies In Disguise not only works but is pure entertainment from start to finish.

The fact that the film works is probably good news for Will Smith (Men In Black) who certainly needs a winner after the absolute shocker that was Gemini Man. In this animation Smith voices Lance Sterling, the greatest spy the world has ever seen. However Sterling’s career is placed in jeopardy when he comes up against arch-villain Killian (Ben Mendolsohn – Ready Player One) who frames Sterling and makes it look like he is using a killer drone to do his own dirty work.

Sterling vows to clear his name when he is confronted by an eager young agent named Marcy Kappel (Rashida Jones – The Social Network) who is hellbent on arresting him. However when Sterling is escaping he is forced to take the nerdy and socially inept inventor Walter (Tom Holland – Spider-Man: Far From Home) with him after he accidentally drinks a liquid that turns him into a pigeon. Now with the lives of many in danger it is up to the Sterling pigeon and the out-of-his-depth Walter to try and save the day.

Like we mentioned previously the whole film’s premise sounds so far out of this world that it simply wouldn’t work, but somehow the screenplay by Brad Copeland (Wild Hogs) and Lloyd Taylor (The Wild) pulls everything together and has it work perfectly. To put it simply the film works because Copeland and Taylor never try to make this film anything that it’s not. They know the premise of the film is ridiculous and they simply go with that ‘flow.’ When Sterling is in human form they make the film a serviceable James Bond parody and when he is pigeon form they are gifted enough comedy writers to be able to introduce an influx of bird jokes and slap-stick comedy that is actually funny.

Perhaps the most important thing though is that Copeland and Taylor alongside the film’s two directors Nick Bruno (first time director) and Troy Quane (The Smurfs: A Christmas Carol) have given this film heart. Never at any time when you watch this film do you feel that this was a film made just to generate some cash at the box office. Yes despite the whole ridiculous nature of the film’s premise from start to finish this feels like a film that was made by a group of people who genuinely believed in the story at hand. The result is a film that will be lapped up by its audience as it goes from a moment of true comedy through to a far-fetched action sequence that totally works and will then rest for a moment as it explores the notion that Walter is actually emotionally hurt by some of the more traumatic events that have occurred during his life. It is moments like that that makes Spies In Disguise resonate so well with its audience.

The team behind this film also completely nailed the voice casting of the film. Will Smith is the absolute perfect choice to play a cooler-than-cool spy while Tom Holland shows real style as he branches out and gives Walter real characterisation through his vocal work alone. At no point in the film did his unique Spider-Man voice become apparent which was something I was worried about when first sitting down to watch the film.

While expecting very little from Spies In Disguise this was one animation that really surprised me. Like Teen Titans Go To The Movies and Planet 51 before it Spies In Disguise manages to overcome the obstacle of having a ridiculous premise and somehow becomes a film that reminds you just how magical cinema can be sometimes. While some of the violence of the film may not make it friendly for younger children this is certainly a film that will be enjoyed by kids who are older enough to sit down and enjoy something like Teenage Mutant Ninja Turtles. Maybe you still think Spies In Disguise sounds like a ridiculous waste of time but trust me you write off this film at your own peril.

You can read our Spies In Disguise review that appeared in ‘The Phuket News’ using this link – https://www.thephuketnews.com/spies-in-disguise-with-no-egrets-74415.php