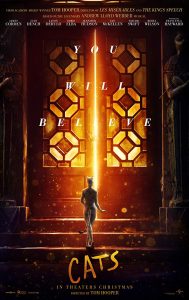 Summary: A tribe of cats called the Jellicles must decide yearly which one will ascend to the Heaviside Layer and come back to a new Jellicle life.

When you look back of 2019 and think of what films made the biggest impact in cinema there were perhaps none quite talked about the way Cats was. When the trailer dropped for director Tom Hooper’s (Les Miserables, The King’s Speech) version of the Andrew Lloyd Webber musical it made the nightly news for all the wrong reasons. For some Hooper’s cats looked strange, not-quite-human not-quite-cat, but others  (like myself) found themselves erring on the side caution wondering or not if this was going to turn out to be some kind of visual spectacular.

To be honest Cats sits somewhere in the middle. While it is not the musical masterpiece that Hooper created with Les Miserables it is also not as terrible as some would have you think. Perhaps the best way to approach Cats is to think you are about to enter a cinema to watch a theatre musical being projected onto the big screen because this feels much more like a concert than it does a cinematic experience.

Originally based on a collection of poems from T.S. Eliot Cats is told through the eyes of Victoria (Francesca Hayward – The Sun Is God, Extra) a young cat who finds herself dumped in a London alleyway one night. She soon finds herself making friends with a magical cat called Mr. Mistoffelees (Laurie Davidson – Will, The Good Liar) who soon introduces her to the world of the Jellicle Cats.

On the night she arrives she finds that the Jellicles are eagerly awaiting the arrival of one of their oldest members – their matriarch Old Deuteronomy (Judi Dench – Skyfall, Shakespeare In Love) who on this night every year choices which Jellicle will live the life they have always dreamed of. But not everything runs smoothly as the villainous Macavity (Idris Elba – The Losers, Star Trek Beyond) plans on eliminating all of his competition.

Surprisingly the plot of Cats does work on the big screen. It is extremely light on though and at times the film feels like an extra couple of songs have been added to pad it out to feature film length. Despite what many felt from when that first trailer surfaced you do also find yourself as an audience member connecting with the cats on screen. Each has their own persona and whether you want to admit to it or not you do find yourself barracking for a cat to win Old Deuteronmy’s approval.

The film’s biggest weakness though is the way it is put together. The stories and scenes are almost presented the way they would be if you were reading through the original collection of short stories. A certain cat will perform and point out their strengths and weaknesses and then they are spirited away by Macavity before they can have their time with Old Deuteronomy. The sequences though where Macavity and his right-hand cat Growltiger (Ray Winstone – The Departed, Beowulf) are keeping the other cats captive are more like you would expect from a pantomime though and never become as menacing as they perhaps should have been.

While the sequences of watching the Jellicles perform does at times seem magical there is none of the wow factor here that we got with other musicals like Les Miserables and Moulin Rouge. Les Miserables worked on the big screen because it was believable while Moulin Rouge was way over the top which suited the theatre world that it was set in. Cats has the disadvantage of not being believable and it feels like perhaps it would have worked a little better if Hooper had followed in the footsteps of Baz Luhrmann and made this film go more into the fantasy realm as well.

What does work for Cats though is the casting. Judi Dench and Sir Ian McKellan (Gods And Monster, Lord Of The Rings) steal the show as they expertly lead their younger cast. James Corden (Trolls, Peter Rabbit) brings in just the right amount of comic relief while playing Bustopher Jones but it is Jennifer Hudson (Dream Girls, The Secret Life Of Bees) who shines the brightest with her amazing vocals in the role of Grizabella. The ballet skills of Francesca Hayward also allows her to gracefully float across the screen as she leads the audience through this strange new world.

Cats may not leave its audience in awe the way Les Miserables did but it does have its own special charm. The best way to approach the movie is to go into the cinema knowing you will be about to watch a theatre production rather than a big blockbuster film.

Our Cats review that appeared in ‘The Phuket News’ can be read at this link – https://www.thephuketnews.com/cats-gives-us-reason-to-paws-74164.php