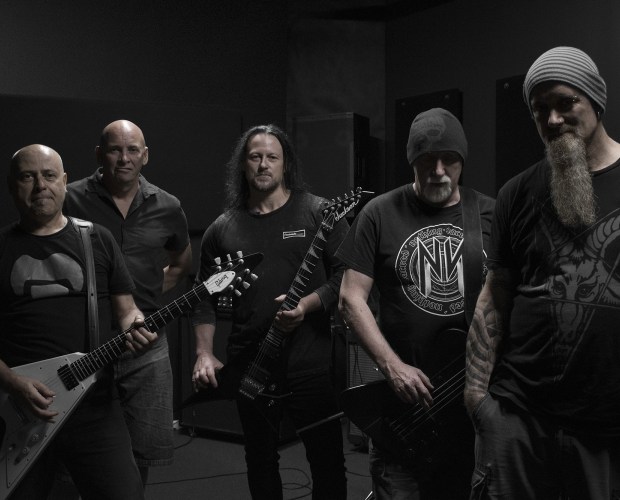 Melbourne band Nothing Sacred are certainly not new to the scene. They have been around since the early 1980s and are a proud member of the Rue Morgue Records stable, so it is not surprising that they were one of the first bands selected to have a track included on the Murders In The Rue Morgue Vol 1 compilation. Recently I was able to sit down with band member Karl Lean to chat about what being on the compilation means to him.

“I’ve known John for a long time,” says Lean and we start the chat by talking about how the relationship between Nothing Sacred and Rue Morgue started. “I’ve always had a massive amount of respect for everything that John has ever done, he is really focussed, he is really committed and he takes a lot of pride in what he does. He also puts a big emphasis on doing a good job. His photography work over the past decade has been outstanding.”

“So when Rue Morgue Records kicked off and they started to look at putting out original music under their own banner it just happened to coincide where exactly we were at. We came off the Metal For Melbourne celebration in 2017 in front of about 600 or 700 people at the Corner Hotel and straight after that we thought that we needed to follow up on it by putting something out… something new. So we started to write a new set of songs, we had already started to do some writing but we thought we should do some more. We had about six or eight new tracks and then we started recording and then we wanted to do something with them.”

It really did seem like the stars were aligning for Nothing Sacred. “We knew that vinyl was making a big comeback,” Lean explains. “And then Rue Morgue came around so I reached out to John and he was only too happy to give us an opportunity to talk to him. I guess it really is a case of who you know.”

That brings our conversation around to what people can expect to hear from Nothing Sacred on Murders In The Rue Morgue Vol 1. “Ah, our track is called “Final Crime,” says Lean. “Strangely enough this is not one of the newer songs that we have written. In the original line-up of our band way back in the 1980s we were finishing off album number two and for various reasons, some being industry reasons and some being personnel reasons we never actually got to finish that second album.”

“So the album was recorded but never mixed and never mastered and never released,” says Lean continuing. “Of course back then we had different members and we even had different guitarists, but a couple of the tracks off that album have always been amongst some of my favourite tracks that we had ever written so we were keen to see them not completely wither and die. “Final Crime” was one of those tracks so we have dusted it off got the new band together – I should say we kind of have one new guitarist and one old guitarist because George has been with us off and on for thirty odd years but he has always drifted in and out as he works on other projects, so he is back on board so we recorded the track all afresh. So it is actually a new recording but it is a track that dates right back and we wanted to release it because a I think it is a quality track and b in our minds it is kind of the closing of a chapter.”

“Now we can look forward to doing new tracks with Rue Morgue,” he continues. “They will all be fresh new track so “Final Crime” felt like a nice bridge between the past and the present.”

One of the other reasons that Nothing Sacred wanted to be involved with this compilation was because they knew it was important for the local music scene. “One of the things that I love that Rue Morgue is doing things like this,” he says. “Pre the internet, pre the time when you could fire up a machine and find whatever you were looking for compilations were the main source with how people got exposed to things. The world is very different it is never going to be exactly like that again but I think with what John has managed to pull together this will be a great showcase of a variety of different things. So you may have come looking for one particular band but you may end up finding two or three others that really stand out to you. So I think it serves as a really valuable bridge, I think it is great that somebody is trying to bring this back together again and once again kiss life back into the idea of compilations… I love it!”

With bands like Nothing Sacred being part of Murders In The Rue Morgue Vol 1 this is one album that you will definitely have to have in your collection.