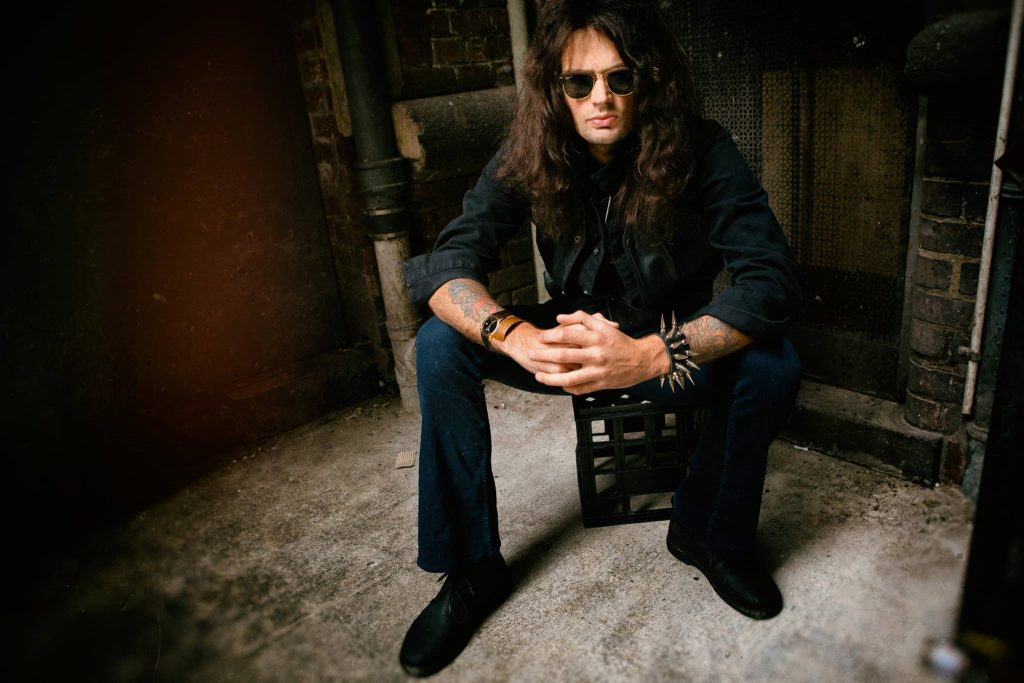 For anybody that thinks that the Murders In The Rue Morgue Volume 1 compilation might just be Melbourne-centric then think again. The next artist to feature on the compilation that we are taking a look at hails from Western Australia and was one of the earliest signing to Rue Morgue Records when the label was first starting out.

“Yeah I am Western Australia based,” says Brittain with a laugh as we start our conversation. “I’m a rock, metal singer who is probably best known for playing in a band called Shots Fired which were a hard rock group from WA. I also used to be in a band called Electric Dynamite out of Melbourne and just recently I have been playing with a Western Australian power metal outfit called Silent Knight.”

With so much musical experience behind him it is little wonder that Rue Morgue wanted him on their label and Brittain says the experience with the label has been awesome. “The journey with Rue Morgue began maybe fifteen months ago,” he explains. “I was in discussions with John, the guy who established and owns the label, and we wanted to produce some of my music through the label. We saw it as a way to get my music out there and a way to get the label up and running. We had great success releasing my 7’ and more recently my full album that also came out on cassette as well.”

“So, it just seemed natural to have one of my tracks put on this new compilation,” he continues. “The track that is one there has not been on any streaming services as yet, so nobody has really heard it except for those that bought my album. So, I think that is pretty cool.”

As he mentions streaming Brittain and I begin to discuss why it is important to still release music on CD, cassette and vinyl. “I think streaming is just a matter of convenience,” he says matter-of-factly. “It’s great when you are driving in your vehicle and you just want to have a mix of whatever playing, but I guess I appreciate it because I grew up with vinyls and tapes lying around the house. There was always music around the house so I guess it was something that was always comforting for me. It also felt real to me because you have a physical product that you can look at and admire… that is my take on it!”

He is also a firm believer that cassettes and vinyl are back to stay as well. “Oh yeah definitely,” he says when I ask whether or not he believes the comeback is real. “You only have to look at the statistics on sales in different parts of the world. Definitely cassette sales are on the rise compared to where they were ten years ago and I am sure that will keep increasing slowly. Also definitely with vinyl you can see that there is a renewed interest amongst younger people. I think it is here to stay, similarly with cassettes.”

“You can produce really great sounding hi-fidelity music on cassette especially if you get the steel-wound cassettes,” he says when we begin to talk about why music always seems to sound better when you aren’t streaming it. “It is almost CD quality.”

While it would be nice to talk about the joys of cassettes and vinyl all day Brittain and I finally laugh and bring the conversation back to what we were supposed to be talking about – his track for the Murders In The Rue Morgue compilation.

“It is a hard rock track,” he says still laughing. “It kind of gives a tribute to the English bands from the south and it features some great local talent from Perth, all of whom are my friends. The track is essentially about the bondage of religion especially in the inner-west and it looks at the mechanisms used to confuse people deliberately. John chose the track – I actually didn’t choose it – because it was his favourite track on the album, so he chose it for me. I didn’t have any issues with that because if people are into that kind of music, heavy rock, although it does have some heavy metal elements it is largely heavy rock. It also has some Deep Purple and Rainbow type keyboard playing and some shredding solos… so yeah it is just really exciting to have it finally produced on the compilation.”

And when it comes to why people should buy the compilation there is not better salesman than Brittian. “If you are thinking about buying it just go out and do it,” he says. “There is so much great local talent on there – the speed metal kings of Melbourne Espionage, Grant Burns is on there… there is just some fantastic rock and heavy metal on there.”

So take Brittain’s advice and go out and grab your copy today.