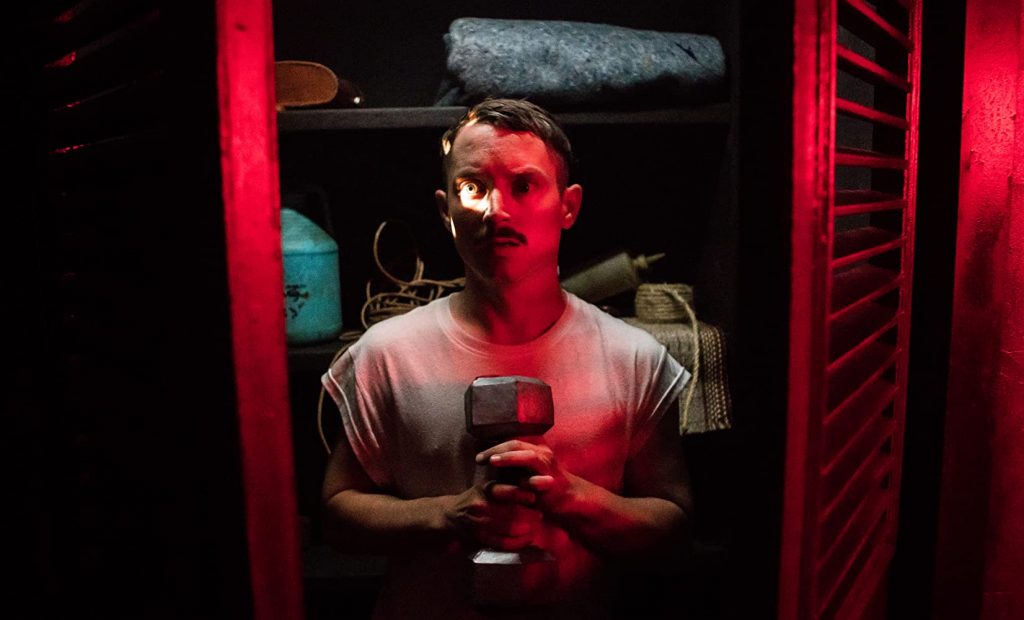 It is like a match made in heaven. One of the world’s most exciting cult filmmakers teaming up with one of Hollywood’s most under-rated leading men to make a film that is guaranteed to become a cult classic. For Ant Timpson the last few years has seen him re-invigorate the cult film scene working as a producer on films like The ABCs Of Death, Deathgasm and The Greasy Strangler. Now he steps into the director’s seat to direct Elijah Wood in the stunning new thriller Come To Daddy.

“This film really is by baby along with the writer Toby Harvard,” says Timpson laughing when we first begin to talk about the film. “I had worked with him before on a film called The Greasy Strangler so we kind of met through that process and kicked off a friendship and then after my Dad carked it in front of me that was kind of the whole creation of Come To Daddy.”

“So I got in touch with him and said I had this skeleton idea for a film that I want to make,” he goes onto explain.  “My Dad’s passing really gave me a kick in the ass. I was really staring mortality in the face and I started to think about what kind of filmmaker I was and wanted to be. My life had taken a completely different path and I had ended up producing other people’s films and I had really gotten busy with a lot of different projects so I ended up taking this to Toby and he ended up writing a draft from there. So it started from an idea I had and then I saw it right through to completion.”

Hearing that leads me to ask Thompson how he found writing about something so personal when some filmmakers find they just can’t put pen to paper when the story is so close to home. “That actually happened to me when I set about doing another project when my mother passed,” he tells me.  “That had the reverse effect on me to what this one did. That kind of put me off making anything, but this had completely the opposite effect, this re-energised me and made me want to be far more creative. This time I wanted to be at the helm and do more directing than producing. It was really a case of shit or get off the pot and once I knew I was going to frame it within a genre framework. That was something I felt a lot more comfortable with and it wasn’t going to end up being some morbidly depressing drama about the death of my father then I felt a lot more confident about it and a lot more positive about the whole experience.”

“I didn’t want to put too much weight on him as a man,” says Timpson referring to his father. “But I knew this is something that he would have dug as a viewer, but I knew this would be something that other viewers would dig as well. My whole family have kind of a gallows sense of humour around tragic things – making jokes at the worst possible time so that is kind of the atmosphere that I grew up in – dealing with death was not kind of contemplated it was more about cracking one liners. There is a lot of my background in this when it comes to approaching the subject of death.”

One of the biggest drawcards for this film is Elijah Wood who has been making a name for himself away from blockbusters over the past few years with amazing performances in Cooties, Set Fire To The Stars and the US production of Winifred. It turns out it wasn’t that hard for Thompson to get Wood involved in Come To Daddy.

“I’m good friends with Elijah,” explains Timpson. “That helped obviously. But we had also worked together professionally on The Greasy Strangler, but I had known Elijah for a long time. We had hung out and we had mutual friends in New Zealand also in Austin, Texas where he has his set-up as well. So it was quite easy to approach him and pitch it him, and then when Toby and I were working on the script he was always in the back of our minds and we found ourselves saying quite often ‘wouldn’t it be amazing if Elijah said yes to this.’”

“It felt like that because the character was kind of a really detested person – a white, millennial, rich LA douche bag, hipster, DJ – it was how are we going to get the audience to have an empathy for this character otherwise they would just tune out. But I always knew that Elijah had that inherent likable beneath whatever veneer he is going to put on. There would be some way that he would find a way to make the character really human and really fully-fleshed so people could get behind his journey. It was just so exciting when he came on board because then everything just picked up into a high gear after that.”

Come To Daddy is available on streaming platforms now.