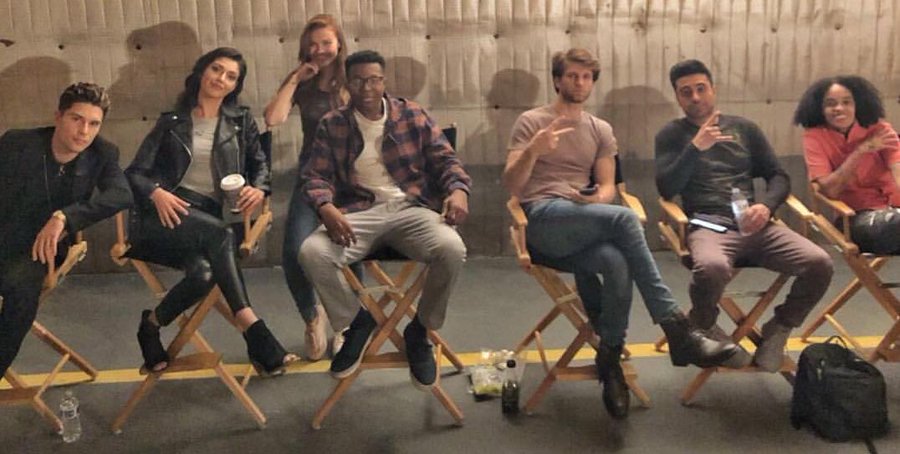 Bloggers and vloggers haven’t always been treated that fairly by cinema. While the occupation is still one of the fastest growing businesses in the world in movies vloggers are often either depicted as ‘the geek’ or a ‘vain wannabe.’ Therefore it comes as a fair bit of relief to see brand new horror film Follow Me centres around the character of a vlogger who is seen in a normal light.

That also comes as a relief to one of the actors in the film – George Janko. Janko of course has made a name for himself as a recording artist and a vlogger who now has over one million followers on social media.

“I thought the writer did a great job,” says Janko laughing as we talk about the way the film treats the subject of vlogging. “I thought Will (Wernick – the film’s director and screenwriter) really did jump into the mind of a vlogger.

“He did understand the process of what a vlogger was and that is something that is really beautiful,” explains Janko the passion clear in his voice. “It is really beautiful because when I started vlogging most people didn’t look at it the way that they should have – they actually looked down on it or they looked past it and considered it nothing. But here it was like ‘wow somebody actually understands what it is and it shows what a hard job it is. It can be stressful on the mind, stressful on the soul. So when I read this I saw that it very much lined up with my life and I was like ‘this is great writing, they really did their homework on it.”

As I talk to Janko more about the subject he opens up to why the portrayal of a vlogger in Follow Me means so much to him. “When I came to Hollywood through the entertainment field I came in a different direction,” he explains. “A lot of people come there and they just get an agent or a manager. But when I got there nobody wanted to work with me. Nobody wanted to be my manager or my agent, nobody wanted to represent me because I had nothing to show.”

“I was a twenty-two year old boy who didn’t have anything under his belt,” he says continuing. “So, I picked up the camera and I wrote my stuff, I directed my stuff, I edited everything and I acted in everything myself. I did that to just prove to myself that I am worth being in this industry if they just gave me a chance. But when I walked into rooms to audition I would see the eye-rolling and hear ‘oh this guy is a YouTuber blah blah.’ There is a bad spin on it and we do have bad people in our industry but we also have very hard-working and honest people in our industry. So now we are kind of shining a light on people who are working hard and making an honest living out of this it’s nice. I feel like I am being respected instead of being belittled.”

The journey for Janko to get to a role in a major feature film like Follow Me has been a tough one but it also sees him get the opportunity to work with the most promising filmmakers in Hollywood – Will Wernick the man responsible for the brilliant Escape Room three years ago. Janko admits that Wernick’s script was also a big pull for him to want to get involved with the project.

“Social media aside the whole premise that I would be the comedic relief pulled me in,” he says again laughing. “I feel like that is how I have been my whole life. During tough circumstances or during troubling moments with people I have always figured out a way to make people laugh. So I used to watch movies where there was a serious part and you don’t want it to be too serious so somebody would make you laugh. It was then that your heart would flicker because there was a little bit of positivity.”

“I always loved that,” Janko goes on to explain. “So when I read the character of Dash I knew that was what he was. He would be the guy that would always light up a room when people walked in and I knew that when things were getting tough he would still make people laugh. I could relate that character so much to me that I just knew that me playing him was just meant to be.”