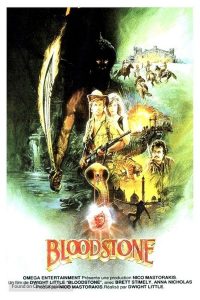 Summary: A newly wed couples trip to India is ruined when a small time thief slips a gem into their luggage. 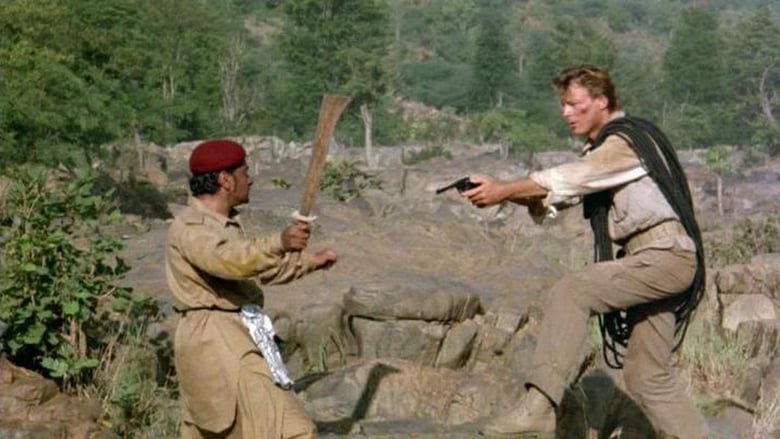 There is just something about going back and exploring old cult cinema classics that you can’t beat. Of course many film lovers will write some of these films off as trash but to me I always find a special kind of magic in them that just can’t be replicated in modern day cinema.

One such film is the 1988 classic Bloodstone. Directed by Dwight H. Little (who went on to direct episodes of popular shows such as Bones and Dollhouse) Bloodstone was a pretty early attempt at marrying the American and Indian film industries while also trying to launch Brett Stimely as an action star. Stimely’s action career never really took off but chances are you have seen him play the role of President Kennedy in a number of films over the years including Watchmen and Transformers: Dark Of The Moon.

In Bloodstone Stimely plays Sandy McVey a man who has just quit as a Police Officer to enter family textile business run by his newly-wed wife Stephanie (Anna Nicholas – Remington Steele). The pair travel to India for business but their entire trip is spoiled as they happen to sit next to small-time thief Paul Lorre (Jack Kehler – Point Break) who is trying to smuggle the priceless Bloodstone back into India.

Convinced that the bumbling Inspector Ramesh (Charlie Brill – Star Trek) is waiting for him Lorre slips the gem into the luggage of the McVey’s which in turn sees rich criminal Van Hoevan (Christopher Neame – Ghostbusters) kidnap Stephanie in a bid to obtain the gem. That leads to Sandy having to team up with criminal-turned-taxi-driver Shyam Sabu (Rajinikanth – Baashi) in order to rescue her.

There is so much to like about Bloodstone. From the screenwriters attempt to make Ramesh the brand new Inspector Clouseau through to the very 80s action sequences featuring Stimely taking on any bad guy that comes his way.  In typical 80s style the film tries its best to try and make Stimely memorable in the role. His likeness to Richard Dean Anderson is uncanny at times but his action sequences do work, although cult cinema fans may giggle a lit at how staged the fights are, and the screenwriters also manage to give him some memorable one liners that he delivers while laying waste to the bad guys. Look out for one little gem delivered as he ‘let’s go’ a criminal just the way the man requested.

Stimely is also well supported by Rajinkanth in one of his only English speaking movie roles. The two make a great on-screen duo and as the film goes on you realise that it is a bit of a shame that Rajinkanth never did more American films as he had the rare duo of good dramatic acting and great action skills.

Story-wise Bloodstone definitely still holds up today. The premise that the gem is passed from person to person keeps the audience constantly guessing to its whereabouts throughout the film. While the psychotic nature of the Bond like villain – Van Hoeven – also leaves the audience wondering what exactly he is capable of doing to the film’s heroes.

Watching Bloodstone in 2020 makes you realise what a hidden gem the film is. The great mix of Indian and American culture works throughout the film while the on-screen duo of Rajinkanth and Brett Stimely makes you wish that they had made more movies together especially as the film spun off into a franchise. Bloodstone captures all that 80s action magic and is well worth a re-visit again today.