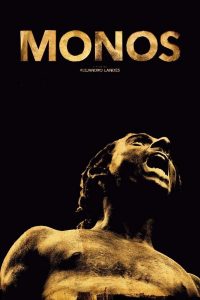 Summary: A group of teenage soldiers are left to look after a hostage as their militia comes under attack from authorities.

Does a good film always have to mean a pleasurable experience? That has been a question that I have asked myself a lot over the years. As a cinema lover I’ll admit that some of my favourite films can sometimes make for an uncomfortable viewing experience. Films such as Trainspotting, Baise Moi and Bully tackle some pretty invasive subjects. And yes while they are hard to watch they are films I turn to time and time again when I want to watch something decent. Now I think I will be adding new Columbian film Monos to that list.

From director Alejandro Landes (Porfrio) Monos follows a group of child soldiers who are part of a rebel alliance designed to try and take a stand against Columbia’s Government and armed forces. The group’s Commander (newcomer Wilson Salazar) runs a tight ship. He makes his troops train hard so when he gives them a mission he expects them to pull it off with ease.

The task at hand is to look after a milking cow named Shakira and to guard a young foreigner (Julianne Nicholson – I, Tonya) who has been kidnapped for ransom by the rebels. However, kids being kids things get out of hand as they celebrate the union between Wolf (newcomer Julian Giraldo) and Lady (newcomer Karen Quintero).

With the camp in disarray it comes under attack from the Army so their Commander sends them deep into the jungle to guard their prisoner in a more secure environment. However, the disturbance amongst the group leads to Bigfoot (Moises Arias – Ender’ Game) making a grab for power while the more sensitive Rambo (newcomer Sofia Buenaventura) becomes the group’s punching bag.

There  was no way I was ever expecting a film about child soldiers to be something light and fluffy, but there was something about Monos that was very, very different than what I expected it to be. On the surface these kids are going through all the things that you would expect from a coming-of-age film. There is romance, bullying, drinking, drug use and even moments of sexual exploration. But when you add guns and a military regime into the mix the suspense is driven sky-high.

What I thought was remarkable about the film though was how easily you warm to group of kids who are basically putting a young girl through the most traumatic experience of her life. Somehow though the screenplay even finds a way to bring in moments of true tenderness between the group and their victim… it sounds strange but believe me it works and it is what makes this such a stunning film.

Throughout watching Monos I also found myself blown away by the natural feel that the film conjures up. Maybe it is because one of the cast was an actual child soldier in real life or perhaps it is because most of the cast have never previously acted so were easy for the director to mould to what he needed, but for some reason there are times in Monos when I felt like I was watching a documentary and not a scripted thriller.

Monos shares a lot of similar themes to Lord Of The Flies and I have to say that it could easily become a cult classic just like its predecessor. How Monos escaped Oscar attention I will never know – that is a crime in itself.