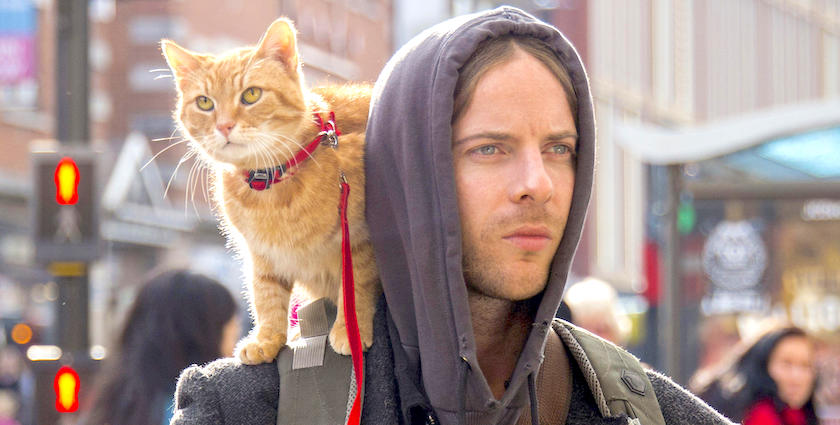 Summary: James Bowen reflects on a time when he thought Bob The Cat was going to be taken away from him at Christmas time.

OUR A CHRISTMAS GIFT FROM BOB REVIEWS

I will always be the first to admit that I am a sucker for Christmas movies. I blame it on the fact that Christmas movies were part of the reason why I became a cinephile in the first place. One of my first memories of the cinema was going with my parents to what is now the Cameo Cinemas to see a rare Aussie Christmas gem called Bushfire Christmas. I can also vividly remember falling in love with Dudley Moore’s Santa Clause: The Movie the first time I watched it and then being overjoyed when I ripped open my presents on Christmas morning to find the movie’s companion book among my swag from Santa… yes at that moment I learnt that Santa is a cinema fan as well.

It is because of my love for Christmas movies that I am always willing to over-look the cheesiness and over the top sentiments that seem to come with every holiday movie when I sit down to watch them. Yes there are some people out there who will roll their eyes even at the thought of sitting down to watch A Christmas Gift From Bob but for me it put me holiday bliss.

A sequel to the popular A Street Cat Called Bob this film picks up as the success of James Bowen’s (Luke Treadaway – Attack The Block) novel is beginning to sweep around the world. After attending a publisher’s party where he feels very uncomfortable he leaves only to find a young homeless busker being bullied by a Council Official named Leon (Tim Plester – Game Of Thrones).

While sitting down and providing a meal for the young busker James recounts a Christmas story of when he and the famous Bob found themselves under threat from Leon and the kinder Ruth (Pepter Lunkuse – Father Brown) who threatened to separate the pair because they had to investigate whether or not Bob was being looked after correctly by James.

Now I will be the first to admit that the storyline here is pretty thin, but on the flip side I also have to say that I thoroughly enjoyed the film. Sure the suspense is pretty much wiped from the film because you see James and Bob together at the start of the film before they recount the tale and yes some of the main characters are just token clichés, but I still firmly believe that every cat lover out there will sit down and thoroughly enjoy this film.

It is also worth noting that this sequel is not as alternative in style as the first film was. In the hands of director Charles Martin Smith (Dolphin Tale) the film becomes a complete family fluff piece… but seriously isn’t that what we all look for in a Christmas movie anyway? Surprisingly the film does break out of its bubble of fluffiness from time to time as it just causally reminds its audience at how some homeless people do become targets for figures of authority when they are doing nothing but trying to survive.

Of course the highlight of this film is Bob The Cat who steals the limelight in every scene he is in, but he is well supported by Treadaway who works remarkably well with the fluffy script and brings some oomph to his role. While at times he is not given much to work with in the way of dialogue he counteracts that with some brilliant facial expressions that certainly gives the audience a strong feeling of how James is feeling at that very time.A Christmas Gift From Bob is a film for anyone that loves animal or Christmas films.

Hey, if you love both you are going to be in your absolute element so enjoy!!!

Other Subculture A Christmas Gift From Bob Reviews:

You can read our review of A Christmas Gift From Bob that appeared in The Phuket News here – https://www.thephuketnews.com/bob-the-cat-is-back-78453.php