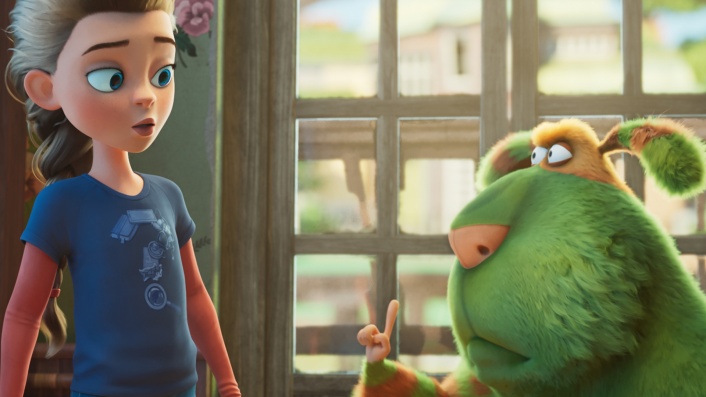 Summary:  Not many people know that every house is inhabited by finns. They are furry creatures that appear in human world to take care of a house and keep the hearth. Finnick is a young Finn, who doesn’t seem to care about his responsibility of making a home out of the house. He is just making pranks on «his people» and that is the reason why none of the families wanted to stay long in his house. Everything changes when a new family comes to his house, where Finnick’s tricks do not work at all, and he meets 13-year old Christine and inexplicable events begin to happen in the city. Finnick and Christine, who are so different, will have to team up and work together to solve the mystery of the events and save the city.

This seems to be the school holidays of hidden gem family films. A couple have been released with very little fanfare and one of the better ones just happens to be new Russian animation Little Monsters… which has been released worldwide under the title Finnick. I just had to write about this film because I feel so often that international family films often get lost in the ocean of Hollywood films – which is a shame when you realise how good, including this one, often are.

Directed by Denis Chernov (Teddy Boom!) I found that Little Monsters contained a level of creativity that so many filmmakers seem to forget that animated films need to have to make them enjoyable for an entire family. I remember how I was blown away by how different Planet 51 was so many years ago and I found that magical feeling returning to me as I loved watching every second of Little Monsters.

Little Monsters is set in a world where every house has a creature called a Finn living it. A Finn cannot be seen by humans but has the role of helping each household run smoothly, but that is not exactly the case with Finnick (voiced by Billy Bob Thompson). He is a Finn that seems to hate humans and relishes in the fact that he becomes so annoying that humans leave the house that he inhabits – the result is a rundown home that nobody wants to live in… and Finnick couldn’t be happier.

But then along comes Christine (Nathalie Ferare) who has once again been made cities due to the fact that her actor Dad (Clifford Chapin) and actress Mum (Emily Cramer) have just landed roles in a popular television show.

As they constantly prepare for their ‘big break’ the inquisitive Christine soon discovers the grumpy Finnick who is doing all he can to force the family to move out. But then when the evil JB (Robb Moreira) devises a plan to destroy the city that involves cruelty to Finns suddenly Christine and Finnick find themselves having to become an unlikely duo.

I think what I love the most about this film was the creativity and how different it was to anything else we have seen on the screen for a long time. Often the animated films that we see are either based on a television series or a book but with Little Monsters this is a world that has been entirely created, from the ground up, by a team of screenwriters and the result is something fresh that I found fuelling my own imagination.

The film also steers away from stereotypes. While the characters of the Mum and Dad, as well as their boss, are over the top they are never clichéd and are given characteristics of their own. It is kind of a weird feeling watching the film because the characters are so real and believable that at times you forget that you are watching an animated film.

What I took away the most from Little Monsters though is the creativity of the world that has been created by the film. The legend of the Finns feels like it should be made folklore somewhere while the city itself contains characters that you can’t help but fall in love with and even relate to. Even the ways created for the writers for JB to try and destroy the city are new and creative and you can only hope that this filmmaking team stick together and we see more tales from this world brought to the big screen.

Please don’t let the fact Little Monsters is an international animated film put you off. The film has been dubbed so well into English that you could never tell that it has been dubbed. The animation itself is out of this world and it touches on topics and themes that are universal and important to all. Above all though this is one of the most creative films that you will see this year and I feel that families everywhere will simply fall in love with it.