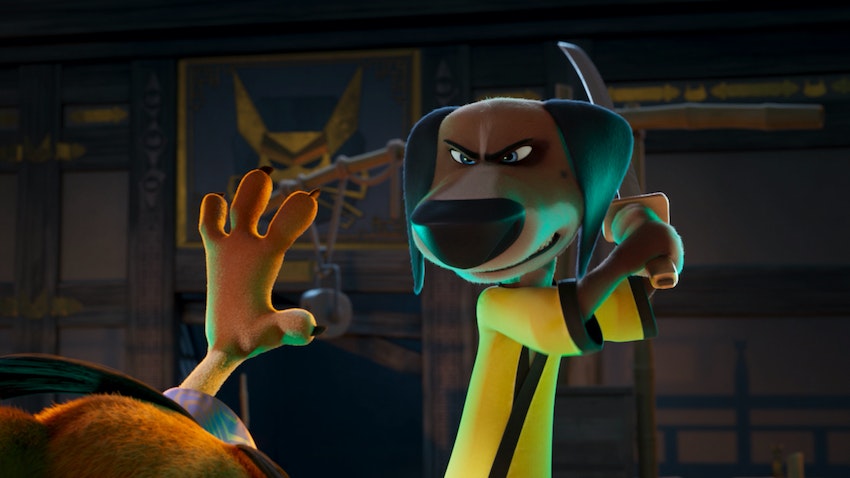 Summary:  Hank, a loveable dog with a head full of dreams about becoming a samurai, sets off in search of his destiny.

David Griffiths’ Paws of Fury: The Legend Of Hank Review:

I think I just had one of the funniest experiences that I am likely to have in a cinema this year and was something that I was wasn’t really expecting. Brand new animated family flick Paws Of Fury: The Legend Of Hank has been released in Australia with very little fanfare, a shame really because I found this to be the kind of film that can be enjoyed by the whole family – both kids and parents alike.

A mixture of both a Western and an Oriental feel the film centres around a young dog named Hank (voiced by Michael Cera – Juno) who dreams of becoming a samurai. That dream stems from the fact that when he was a young pup he was rescued by a great samurai named Jimbo (Samuel L. Jackson –  Pulp Fiction), but it is a distant dream because samurais can only be cats. In fact dogs are not even allowed to be in the areas protected by samurais – those areas are solely reserved for cats.

Undeterred Hank travels into the forbidden area and soon finds himself captured by the evil Ika Chu (Ricky Gervais – The Office) who has devised an evil plan to impress The Shogun (Mel Brooks – The Producers) and one day bring him down so he can steal his role.

After hearing about Hank’s dream to become a samurai though Ika Chu realises that he can use the young dog for his own good. Part of his plan is to get rid of a town that interrupts the view from his palace so he sends the inexperienced Hank to ‘protect’ the town knowing that he will not only fail at his mission but will also be despised by all who call the town home.

What he doesn’t count on though is that the town is home to Jimbo and that one young kitten, named Emiko (Kylie Kuioka – Better Nate Than Ever), will believe in Hank and try to help him become the best samurai he can.

I think the most surprising thing about Paw Of Fury: The Legend Of Hank was just how damn fun the film was. Directed by a team of directors including Chris Bailey (The Great Wolf Pack), Mark Koetsier (first time director) and Rob Minkoff (The Lion King) the film takes on all the tropes of a western and mixes it together brilliantly with the style and action of a kung-fu film. Along the way the team of screenwriters also infuse just the amount of comedy – both written and slap stick – that will certainly appeal to those that like the old school kinds of animations made famous by Warner Bros. in the past.

The other thing I loved about this film was the messages and morals that it touched on. The film tells the younger audience members that they should never give up their dreams no matter what obstacles are placed in their way while it also the dog vs cat storyline to have a very meaningful moral about racism. The great thing is the film doesn’t over-preach but still manages to get its point across to people of all ages.

I also found the voice casting to be spot on. Ricky Gervais steals the show with his vocal athleticism playing the film’s villain while Michael Cera takes on a more unrecognisable style. I should also say that audience members should listen closely to the voices of some of the villagers and they will hear the work of people such as Djiimon Hounsou (Guardians Of The Galaxy) and Michelle Yeoh (Everything, Everywhere All At Once).

While it hasn’t received the love that it should have before it has been released I think Paws Of Fury: The Legend Of Hank is the kind of film that all members of the family will enjoy, laugh with all while learning some valuable life lessons.

Other Subculture Paw Of Fury: The Legend Of Hank Reviews: