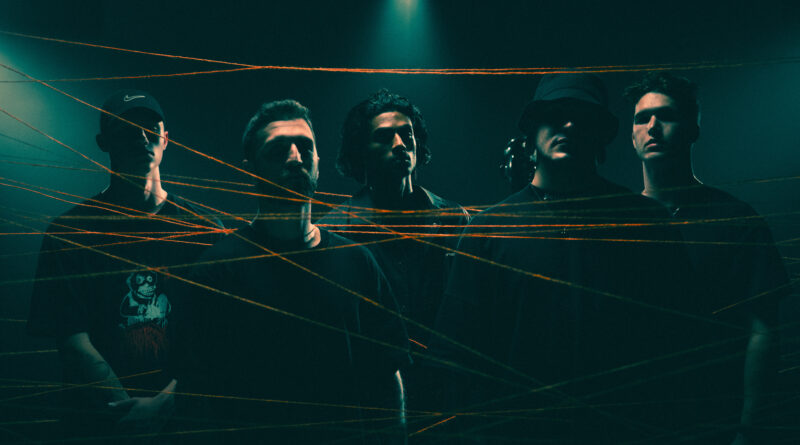 Melbourne’s HEAVENSGATE return with one last single “GINSICK” before their anticipated debut EP, ‘AND ALL I LOVED, I LOVED ALONE‘, drops on Friday February 24 via Greyscale Records in partnership with 1126 Records.

“GINSICK” is the first glimpse of a more personal and vulnerable HEAVENSGATE, showcasing the quintet’s sonic diversity as a group. The new single explores the aftermath of a failed relationship, the process of self reflection, grief after loss and acceptance, all conveyed within a personal, open and unfiltered letter to a past lover.

“GINSICK was chosen as the final single as it ends with a unique section of clean vocals and harmonies performed by Nazareth Tharratt and Joshua Ang, leaving the door open for what will be heard on the EP ahead,” tease the band.

“GINSICK” is the third to release from the groups upcoming EP, which features six tracks that take listeners on a pummelling journey through reflection and self discovery. “‘AND ALL I LOVED, I LOVED ALONE’ explores a diverse range of concepts but also retains the familiar elements that listeners connected with in our previous singles,” tells the band. “It’s a culmination of a lifetime worth of experiences.”

Emerging from Melbourne just last year, HEAVENSGATE made their statement with “CHEMICAL HEAVEN” alongside the announcement of their signing to independent Australian record label, Greyscale Records, in partnership with 1126 Records for North and South America. Both “CHEMICAL HEAVEN” and “SHEMOVESLIKETHUNDER“ have seen play on triple j The Racket, featured on triple j Unearthed and have collectively gathered over 50,000 digital streams and counting.

HEAVENSGATE have laid solid foundations with their intensely emotional singles, combining their collective experiences with diversity and culture, as well as their passion for exploring and highlighting mental health. HEAVENSGATE have introduced themselves as a force to be reckoned with.

“GINSICK” is out now and streaming everywhere. ’AND ALL I LOVED, I LOVED ALONE’ will be available Friday February 24 via Greyscale Records and 1126 Records.