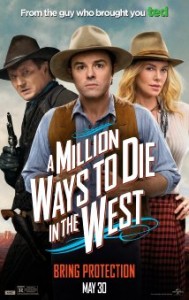 Summary: As a cowardly farmer begins to fall for the mysterious new woman in town, he must put his new-found courage to the test when her husband, a notorious gun-slinger, announces his arrival.

OUR A MILLION WAYS TO DIE IN THE WEST REVIEWS & RATINGS:

Adam Ross: You can check out Adam’s A Million Ways To Die In The West review on The Good The Bad The Ugly Film Show Ep #81

Greg King: You can check out Greg’s A Million Ways To Die In The West review on www.filmreviews.net.au

Television fans worldwide had always known that Seth MacFarlane was a comedy genius. His show-pony, the hilarious Family Guy had revealed a dark sense of humor that wasn’t always politically correct but was always worth a laugh or two. Then came Ted, a film that centered around a foul-mouthed, alcoholic, drug abusing bear, a film that also proved that Mr MacFarlane’s comedic talents could also transfer to the big screen.

Now comes MacFarlane’s real test, that difficult second film… very often the film that will make or break a filmmaker. Just to raise the bar even higher MacFarlane has decided the tough task of making a comedy western, a genre that works well in the shape of Blazing Saddles but has also delivered some severe duds along the way. Besides that he has also decided to star, direct, write and produce the whole shebang. The good news for his fans though is he delivers the goods.

MacFarlane (Movie 43, Ted) plays Albert, a kind-hearted sheep farmer who is a bit of a loser when it comes to life. He spends most of his time concerned at the million or so ways that the old west can kill you while also seemingly fail at being a sheep farmer considering his sheep are normally found wondering all around the town he calls home.

To add to his loser status he suddenly finds himself dumped by his girlfriend, Louise (Amanda Seyfried – Epic, The Big Wedding) who decides that she is better suited the much more successful and moustached Foy (Neil Patrick Harris – Cloudy With A Chance Of Meatballs 2, The Smurfs 2). Worse still is the fact that Foy has challenged Albert to a gun duel and despite his surroundings he has never fired a gun before in his life.

Enter Anna (Charlize Theron – Prometheus, Snow White And The Huntsman) the attractive gun-slinger who rides into town and takes an interest liking to Albert. She is more than happy to train him for the gun fight and along the way they learn that they also share the same interests… and sense of the humor. The one thing that she fails to tell him though is that she is married to, Clinch (Liam Neeson – The Lego Movie, Non-Stop), a tough, violent outlaw who is not impressed when he finds about Anna and Albert.

While A Million Ways To Die In The West does ultimately work it is on occasions hit and miss… although the hits do outweigh the misses. The typical MacFarlane humour is there that his fans have come to know and love, the cheap shots at everyday life and the occasional black humour moment that makes you laugh despite the fact that you feel it is not a topic that you should be laughing at. To his credit this type of humour works throughout the film but at times it also feels that MacFarlane works too hard to get his comedic point across. For example do we really need to see Foy kick over a hat full of diarrhoea to get the joke, or do we need a close-up of a sheep penis to find the fact the sheep relieves itself on Albert hilarious?

Then there are the parts of the film that work amazingly well. Albert is set up as a character that you are going to like and while some of the characters, such as Clinch, could be described as clichés there are interesting peripheral characters such as Edward (Giovanni Ribisi – Gangster Squad, Ted) and Ruth (Sarah Silverman – Gravy, TV’S Louie), a Christian couple that don’t have sex before marriage despite the fact that she works as a prostitute. It’s these kinds of side stories that certainly keeps the audience focussed on the film and laughing throughout.

When it comes to the acting side of A Million Ways To Die In The West a few of the cast get really smooth runs. Liam Neeson plays Clinch well but it feels like he is in cruise control while at times it almost feels like Charlize Theron is playing herself. Sarah Silverman, Giovanni Ribisi and Neil Patrick Harris all nail their comedic timing, while MacFarlane has shown that he is a good actor when he steps in front of the camera. Hopefully we see him do more of that in the future and not just concentrate on voice work.

A Million Ways To Die In The West is not the kind of comedy that will appeal to everybody, some of the jokes may go into some people’s ‘too crass’ pile, but for others this is going to be the kind of film that you will get laughs at throughout. Maybe not as good as Blazing Saddles but still a worthwhile comedy with a good romantic subplot.