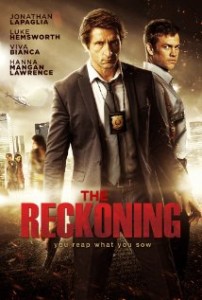 Summary: After his partner is murdered, a detective must track down two teenage runaways whose video footage contains the identity of the killer.

OUR THE RECKONING REVIEWS & RATINGS:

There has been an influx of so-called crime thriller films over the past few years. A lot of screenwriters and directors have seen the success of television shows such as Law & Order and C.S.I. and decided that if that is the genre the public want at the moment then that is what they will give them. The problem has been though that many of those filmmakers have also decided to use the tired formula used by those television shows and that is certainly something that doesn’t work on the big screen.

That’s why The Reckoning is such a breath of fresh air. Director John V. Soto melds together the crime thriller genre with so good old fashioned suspense and a found footage storyline. Now I’m not normally a fan of found footage films, yes it worked for The Blair Witch Project but in my opinion has gone downhill from there, but here it works really well due to a tight script that delivers some great twists and turns along the way.

The film itself sees Detective Robbie Green (Jonathan LaPaglia) and his partner Detective Jane Lambert (Viva Bianca) handed a strange video tape that will help them piece together the mystery of the murder of their colleague Detective Jason Pearson (Luke Hemsworth).

The tape itself is a ‘documentary’ put together by two runaways Rachel (Hanna Mangan Lawrence) and AJ (Alex Williams) who are seemingly hunting down everybody responsible in the terminally ill Rachel’s sister’s death a few months earlier.

As a director Soto has always shown that he has a knack for good suspense. His films Crush and Needle showed that, but with The Reckoning he shows that he can pull away from those paranormal storylines but still bring that air of suspense to the crime thriller genre. There are moments of true suspense here – a rooftop fight with a girl who has nothing to lose and the film even contains a massive a twist that hits the audience right between the eyes when they least expect it.

Budgetary constraints do hold the film back a little but at the end of the day it is a good screenplay that makes a film work and that is the important thing here. Jonathan LaPaglia and Viva Bianca both seem to cruise through roles with ease and as a result they are overshadowed again by a brilliant performance by the young Hanna Mangan Lawrence who just seems to get better and better with every role she plays. Her performances in films such as Lucky Country, X, Acolytes and The Square have always been sensational and once again she comes to the fore here as a young girl who is dying but wants bloody revenge on those who took her sister away from her. It’s a challenging role but one she delivers with a punch.

The Reckoning is a must see for those that like their crime thrillers with a bit of edge. John V. Soto’s paranormal genre background shows in this film, his murders are a little edgier than you wouldn’t normally expect in a crime film while the found-footage storyline also brings something different to the table. Once again we see when it comes to crime films Aussie filmmakers are well and truly at the front of the pack. 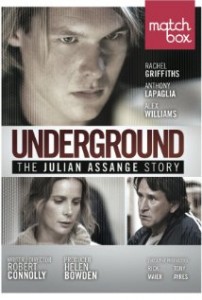 A look at the early career of Wikileaks founder, Julian Assange.