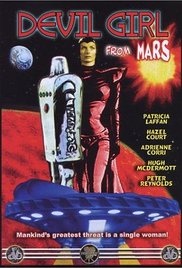 Summary: An uptight, leather-clad female alien, armed with a ray gun and accompanied by a menacing robot, comes to Earth to collect Earth’s men as breeding stock.

Devil Girl From Mars is a 1954 black and white science fiction film classic with an impressive execution. It was made by Spartan Productions and produced by the Danzigers with Jack Cox as Director of Photography.

The story revolves around a small group of people at an isolated pub, “The Bonnie Charlie”, in the Scottish Highlands. Circumstances bring this quiet homely pub’s off-season a series of unexpected guests who soon find themselves trapped when a UFO descends from the sky.

With a screenplay written by James Eastwood (based on the play by Eastwood and John C. Mather), the story effectively develops the mood and the fear of the characters in confinement. This works to brilliant effect to keep us focused on the main story.

A striking opening shows a bomber explode in the sky when it meets an invisible force. Edwin Astley’s big orchestral score punches through and later punctuates Nyah, the Martian’s, appearances throughout the film; typically with big, ominous drum beats matching Nyah’s inexorable walk.

The film is served extremely well by economy in all aspects of production, allowing the director to create a strong mood with thick shadows. Without having to create a whole location, scenery is often implied through the use of lighting – such as casting shadows of branches across the scene – helping to create the claustrophobic isolation.

A few of the conventions of the time are used; notable staples of Fifties post WWII and science fiction. Particularly, we have the flying saucer from another world – produced to great effect and shot just right as to make it believable. The filming of scenes where Nyah and her captives enter and exit the craft is of particular note for its impressive execution.

The characters form part of these staples, including Nyah (Patricia Laffan) the attractive and striking Martian who has come to Earth seeking men for breeding stock after a war between the sexes saw the emancipation of women on Mars (contrasted by the more ‘feeble’ Earth-based characters) and left the males of their species in decline. Her costume was created by Ronald Cobb, making good use of materials and design to make her at once attractive and imposing (almost a sleek Nazi bondage outfit).

There is also the scientist, Professor Hennessey (Joseph Tomelty), through whom we look for the reasons and solutions; intellect very much the mindset back then and not today’s lazy idea of action and violence to resolve situations.

Of course, there are the gung-ho heroic character, reporter Michael Carter (Hugh McDermott), and his potential love interest, Ellen Prestwick (Hazel Court). These can be quite predictable, but good effort was made by the writers to give Ellen a backstory, which also helps to build her attraction to Carter; although I do feel that her declaration of love comes too suddenly and could have benefited from a couple more scenes of these two beforehand.

Tension is created by adding an escaped convict to the mix – Robert Justin, posing as ‘Albert Simpson’ (Peter Reynolds) – creating distrust early when his identity is revealed. I do feel that he was under-used and they could certainly have built upon this element further.

The special and practical effects are, again, used with a sense of economy and are only seen enough to make their effect strong. Some are simply ‘beam’ or light effects, but the execution of them is impressive and functional without any clumsy attempts to go overboard which would have ruined believability.

Another staple of the Fifties’ sci-fi is the alien robot, which is quite typical of the designs used at the time but with some nice elements to add effect. Again, it is used sporadically to display the Martians’ power and act as a threat. Through good photography its presence is built up and made more impressive.

The design of the alien technology is more effective in the flying saucer itself, with fine production and editing used to show the landing and motion. The best work, in my opinion, is the stark interior of the craft, created by clever lighting to show a sense of the higher alien science rather than resorting to the clunky, dated ‘buttons, levers and tape-reels’ that littered productions of the time. This is also made successful by discussions of the science behind the craft’s workings to lend it gravitas.

Notable performances come from Patricia Laffan’s strong villain and Adrienne Corri as Dorris, who struggles to keep it together while protecting her lover’s identity as an escaped convict amongst the fantastic drama.

Hazel Court is also worthy of mention for her efforts at being able to create some definition to her character and hitting the right notes when called upon, despite not being given nearly enough to do. Also, Peter Reynolds gave a strong, if underutilised, performance to his role of the desperate escapee.

Overall, I would give this film 4.5 out of 5 for the very successful production and engrossing story.