Summary: As Mother’s Day rapidly approaches various people find themselves going through different stages of life. Sandy (Jennifer Aniston) finds that her ex-husband’s suprise is nothing like she expected, Miranda (Julia Roberts) decides to keep impressing her fans and ignore the fact the day is near, Jesse (Kate Hudson) and Gabi (Sarah Chalke) find themselves having to hide their lives from their parents, Bradley (Jason Sudeikis) prepares to help his daughters through their first Mother’s Day after the death of their mother while Kristin (Britt Robertson) finds it impossible to accept Zack’s (Jack Whitehall) marriage proposal as she heads into her first Mother’s Day.

Over the past few years Garry Marshall’s movies haven’t always been easy to watch. The man who once brought as classic television shows like Happy Days and The Odd Couple has turned to a lazy style of filmmaking which has seen him use the quantity of stars to get people into the cinema rather than the quality of the film. The result has been films like New Year’s Eve and Valentine’s Day which while have had star power but haven’t exactly been the most captivating films to watch.

It was because of that style of filmmaking that has meant that Mother’s Day has virtually been released in Australia with very little fanfare at all, a surprise when you realise that it stars three regular box office winners – Jennifer Aniston (We’re The Millers), Julia Roberts (Pretty Woman) and Kate Hudson (Almost Famous). If you are one of those people that have been a little bit worried about going to see Mother’s Day you can relax because this is one of Marshall’s better modern day films.

The film centres around a number of characters as Mother’s Day rapidly approaches. There is Jesse (Kate Hudson) and her sister Gabi (Sarah Chalke – Scrubs) who haven’t seen their parents in years because of their secret lives they know that their parents would not approve them. There is also Sandy (Jennifer Aniston) who is left reeling after she discovers that her ex-husband (Timothy Olyphant – Hitman) has just re-married the much younger Tina (Shay Mitchell – Pretty Little Liars) which means her children know have a second mother. Then there is Bradley (Jason Sudeikis – Horrible Bosses) who has been left trying to bring up his daughters after the death of his mother while Zack (Jack Whitehall – Fresh Meat) struggles to comprehend why the mother of his daughter, Kristin (Britt Robertson – The Longest Ride) refuses to marry him. Last but not least there is Miranda (Julia Roberts), the television show host that brings the ensemble all together.

After watching Mother’s Day i found myself sitting down and going over the film like a crime scene. Why did Mother’s Day work so well when Marshall’s previous films have been such lame ducks. The first thing I realised was the fact that Mother’s Day seems to flow a lot smoother than the previously mentioned films. Some of the links between characters in the other films have been pretty lame where as in Mother’s Day the relationships are not only believable but help the film’s storyline to move along rather than get in the way of it.

There also seems to be a lot more heart and humor in the film this time around which in the end makes the whole film seem a whole lot more realistic. While the story revolving around Bradley might not be as well presented as the similar story in Steve Carrell’s Dan In Real Life Sudeikis does manage to mix comedy with some truly emotional scenes. Likewise Sarah Chalke and Kate Hudson brilliantly portray two sisters sadly forced to live secret lives despite the fact they live in modern times. Like Sudeikis the two manage to amazingly combine comedy with some scenes that are powerful enough to really upset anybody who has had similar things happen in their lives.

Perhaps the biggest breath of fresh air in Mother’s Day are the acting performances of Britt Robertson and Jack Whitehall. Whitehall largely comes from a comedy background and while he plays a stand-up comedian in Mother’s Day he shows a new side to his talents by also expertly portraying a lot of the more emotional scenes that he shares with Britt Robertson who is almost unrecognisable compared to the roles that she has recently played in Tomorrowland and The Longest Ride.

Marshall really does find the right mix of comedy and drama and manages to make Mother’s Day a credible film that is a joy to watch. This is a film that you can easily become emotionally involved with and with great acting performances from the likes of Aniston, Hudson and Sarah Chalke this is actually a film that you won’t groan at if someone in your family decides that want to watch it every Mother’s Day. Garry Marshall take a bow you have finally learnt how to make a good ensemble film.

Mother’s Day is the third film in director Garry Marshall’s unofficial trilogy based around Hallmark-like “special events” holidays, and it follows the bland template established by the romcom Valentine’s Day and New Year’s Eve. All three films are multi-character narratives with interwoven storylines and a star studded ensemble cast in which a bevy of A-listers vie for screen time. In terms of quality thoughMother’s Day falls somewhere between the superior Valentine’s Day and the lacklustre New Year’s Eve, which seem a little contrived by comparison.

Given the title it’s not surprising that all of the narrative strands here revolve around different concepts of motherhood, maternal responsibilities, complex mother and child relationships, and the daily struggles of motherhood. The formulaic script has been written by four writers including Anya Kochoff Romano (Monster-in-Law) and three first time screenwriters in actor turned writer Tom Hines (a regular in many of Marshall’s films), Lily Hollander, and Matthew Walker, which accounts for a slight unevenness in tone at times.

The film is set in Atlanta and centres around a number of middle class women during the days leading up to the titular celebration day.

Jesse (Kate Hudson) and her sister Gabi (Sarah Chalke, from Scrubs, etc) live next to each other, and they haven’t seen their parents for a couple of years, mainly because they fear that their judgemental mother (Margot Martindale) will disapprove of their lifestyle choices. Jesse has married Russell (Aasif Mandvi), a doctor of Indian descent with whom she has a young son, while Gabi is gay and married to her girlfriend Max (Cameron Esposito). But when their parents unexpectedly stop by for a surprise visit the scene is set for some emotional upheavals and broad racist humour before a reconciliation can be affected.

Sandy (Jennifer Aniston) is divorced from her husband Henry (Timothy Olyphant, from tv’s Justified, etc), but they seem to share a good relationship. But then Sandy is shocked to learn that he has married the much younger Tina (Shay Mitchell, from Pretty Little Liars, etc). She is a little jealous and even bitter at having to share her two sons with their new stepmother who is barely out of puberty herself.

Bradley (Jason Sudeikis) is a physical trainer still recovering from the death of his wife (a cameo from Jennifer Garner), a soldier who was killed in action in Afghanistan a year ago. He is something of a mister mum, trying to raise his two daughters, but struggling to keep it all together. Several of the women at the gym where he works are trying to fix him up with a suitable partner. But as Mother’s Day approaches, Bradley is not sure how to handle his emotions.

Zack (Jack Whitehall) works in a bar but is also an aspiring stand up comic. He wants to marry his girlfriend Kristin (Britt Robertson, from The Last Ride, etc), who is the mother of his young daughter. But Kristin was adopted as a child and is still suffering from some abandonment issues. She is reluctant to marry him until she can come to terms with who she is.

The link that draws all these various characters together is Miranda (Julia Roberts), the popular host of a television home shopping network program and celebrity author.

The cast do what they can with their at times cliched characters. Aniston is a familiar figure in romcoms, and fittingly most of the best moments and best lines are given to her character. She manages to bring the material alive whenever she is on screen. Hector Elizondo, who has appeared in all of Marshall’s films, has a small role here as Miranda’s increasingly exasperated manager.

This is surprisingly lazy filmmaking from veteran Marshall, who of course gave us such classic television sitcoms as Happy Days, Mork And Mindy and The Odd Couple, and big screen romantic comedies like the classic Pretty Woman. Mother’s Day is suffused with his trademark mix of humour and warmth. Here he juggles his large cast and multi story lines deftly enough, and gives us a mix of slapstick humour mixed with sentimentality that sometimes slips into mawkishness. 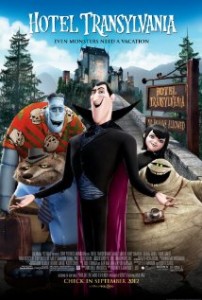 Summary: Dracula, who operates a high-end resort away from the human world, goes into overprotective mode when a boy discovers the resort and falls for the count s teen-aged daughter.