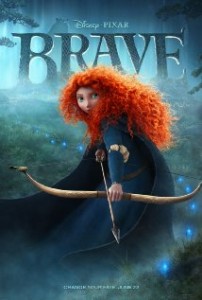 Pixar Animation Studios, the creator of Toy Story 3, whisks you away on an astonishing adventure to an ancient land full of mystery and tradition. Bursting with heart, unforgettable characters and Pixars signature humor, Brave is a rousing, gorgeously animated good time, raves Peter Travers of Rolling Stone.Take a heroic journey with Merida, a skilled archer and headstrong daughter of King Fergus and Queen Elinor. Determined to carve her own path in life, Merida defi es an age-old custom sacred to the unruly and uproarious lords of the land. When Meridas actions inadvertently unleash chaos in the kingdom, she must harness all of her skills and resources including her clever and mischievous triplet brothers to undo a beastly curse before its too late, and discover the meaning of true bravery.

Okay sit down and strap yourself in because I’m about to say something that may be a shock to some people. Brave is one of the best animated films of all time. It doesn’t take rocket science to come to that conclusion because this is one film that simply doesn’t do anything wrong.

While Merida’s mother, Queen Elinor (Emma Thompson – Men In Black 3, Harry Potter & The Deathly Hallows Part 2) wants Merida to be a good Princess and marry one of the Kingdom’s eligible batchelors her father, King Fergus (Billy Connolly – The Ballad Of Nessie, Gullivar’s Travels) encourages to follow her dreams and become a warrior.

Angry that it seems her mother will get her way Merida meets a witch (Julie Walters – Harry Potter & The Deathly Hallows Part 2, Gnomeo & Juliet) and asks her to do a spell that will change everything… the only problem is that happens in a way that becomes life-threatening.

One of the standouts with Brave is the fabulous work put in by the film’s directors, Mark Andrews (Violet, One Man Band) and Brenda Chapman (The Prince Of Egypt). Aided by spectacular feats of animation these talented directors bring a look and feel to this film that most animated films would be envious of. The detail in the shots taken in the forest are amazing, you can even see the lines on each of the leaves.

Another brave decision by the filmmakers that really pays off is the fact that they went with Scottish actress Kelly Macdonald (who most people would remember from Trainspotting) to voice Merida. Most producers would have lined up Hollywood’s latest starlet and just asked her to put on a Scottish accent, but in the case of Brave you feel that would have been something that really wouldn’t have worked.

With a brilliant script and some of the best animation work that you are ever likely to see Brave is one film that will be enjoyed by both kids and adults alike.