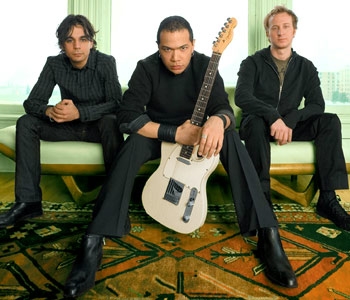 So you’re about to do some shows in Australia for the first time… what are some of the things you’ve heard about Australia that you are hoping are true? What are you looking forward to doing/seeing while you are Down Under?

DANKO: We played in Australia back in 2004. We had a great time. Ever since then I’ve wanted to return. I always ask to see if Australia is on our itinerary every year.

Are you familiar with any Australian bands? If so who do you enjoy listening to?

DANKO: Besides the obvious AC/DC, there’s Birthday Party, The Saints, Wolfmother, Airbourne and Rose Tattoo. Back in 2004, I scored myself a double CD called “Tales From The Australian Underground” that featured bands like Radio Birdman, The Scientists, The Victims, The Fun Things and Pel Mel and it really schooled me in good Australian bands. It’s an amazing release and I carry it wherever I go.

At the moment on your website you are running a comp where one lucky fan will win a ticket that will get them to any show you do. If you had the chance to see every concert a certain artist/band would do in the future which artist/band would you choose and why.

DANKO: Every concert? Hmm… I don’t know if I quite have the attention span to see a band that much. After 15 times I get tired no matter how big a fan I am. Although, I can see Motorhead every day of my life. If pressed, I’d say Metallica or Kiss.

You’re heading to Australia for Soundwave, what do you like about playing at such big Festivals?

DANKO: Soundwave is a perfect example of why festivals rule. The line-up is amazing. Great bands and you get to meet them and hang with friends in bands too. This year there’s a lot of friends of ours on the tour.

Who are you looking forward to hanging out with or seeing perform at Soundwave?

DANKO: Fucked Up, Kyuss Lives, Loaded, Jamey Jasta, Gallows, Billy Talent, Sum 41. We’re friends with those bands. I’m hoping to meet Metallica and Anthrax, if I can. I really want to watch Red Fang and Sick Of It All and all the bands I already mentioned.

You’ve just come off a lengthy tour, how did you spend you rest time? Are you looking forward to hitting the road again?

DANKO: I’m still on vacation mode! So, my vacation has been spent doing interviews, writing for various mags and The Huffington Post and recording podcasts.

How do you keep yourself sane during a tour?

DANKO: I write and read.

Congratulations on your single (Just A Beautiful Day) it sounds absolutely sensational… is this the kind of sound your fans can expect to hear on ‘Rock & Roll Is Black & Blue’.

DANKO: I think ROCK AND ROLL IS BLACK AND BLUE is varied but it’s all Hard Rock through and through. I’ll let critics tell everyone else what it is. I just think it’s good Rock.

So tell us a little bit about ‘Rock & Roll Is Black & Blue’, it’s a thought-provoking album title how did you come up with and what are your thoughts behind it?

DANKO: The title of the album is an old title that’s been sitting pretty in the back of our minds since Year 1 of our band. We wanted to call the first thing we put out ROCK AND ROLL IS BLACK AND BLUE but at the time, another local band from Toronto called The Deadly Snakes put out a 7” called “Real Rock & Roll Tonight”. We thought it was too similar sounding so we just filed it away until now.

What did you find was inspiring you when you sat down to write the songs for ‘Rock & Roll is Black & Blue’? Does this reflect in the album?

DANKO: It’s always just what’s happening at the time in our lives and girls. But let’s be honest here, we’re not reinventing the wheel. It’s just Rock and in Rock’s simplicity lies its beauty. It’s often maligned but it’s actually quite spectacular.

It’s been a while since you’re spoken word album… do you have any plans to record another anytime soon?

DANKO: No but I have started doin spoken word again. I spoke at last year’s Wacken Open Air Festival in Germany for 2 days. I did the first two days and Henry Rollins did the same slot for the last 2 days. I didn’t do spoken word so much as lectured. So I lectured for 2 days on Kiss. I want to do it again if anybody would have me.

How different is it delivering spoken word prose on stage than it is performing with the band?

DANKO: Spoken Word is ten times harder than playing a show, mainly because you are up there by yourself with nothing but a microphone sans mic stand. Also, you find out very quickly how much volume is used to mask mistakes during a live Rock show that can’t be avoided when you’re up there stumbling during a spoken word show. However, it’s equally thrilling too.

Some of our readers may also be interested in your podcasts… what do you normally talk about on them?

DANKO: The Official Danko Jones Podcast is available for FREE download on iTunes and on Soundcloud. My friend, Nick Flanagan, who used to sing in Punk Rock bands like The Brutal Knights and Teen Crud Combo, does it with me most of the time and we just shoot the shit with a guest musician or comedian or just a good buddy. We’ve had everyone from Damian Abraham (Fucked Up), Wade McNeil (Alexisonfire/Gallows), Henry Rollins, Marty Friedman, Brann Dailor (Mastodon), Scott Thompson (Kids In The Hall), Patrick Pentland (Sloan) and Mikael Akerfeldt (Opeth) on it.

So what are Danko Jones’s plans for 2013  after the Australian tour?

DANKO: We straight from Australia to Dallas, Texas to start our North American tour with Volbeat. We can’t wait!