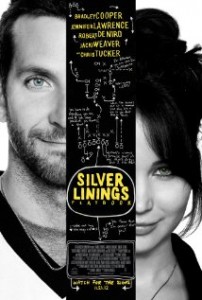 Summary: Life doesn’t always go according to plan…Pat Solatano (Bradley Cooper) has lost everything — his house, his job, and his wife. He now finds himself living back with his mother (Jacki Weaver) and father (Robert DeNiro) after spending eight months in a state institution on a plea bargain. Pat is determined to rebuild his life, remain positive and reunite with his wife, despite the challenging circu…mstances of their separation. All Pat’s parents want is for him to get back on his feet – and to share their family’s obsession with the Philadelphia Eagles football team. When Pat meets Tiffany (Jennifer Lawrence), a mysterious girl with problems of her own, things get complicated. Tiffany offers to help Pat reconnect with his wife, but only if he’ll do something very important for her in return. As their deal plays out, an unexpected bond begins to form between them, and silver linings appear in both of their lives.

It’s funny how Oscar Buzz can win some people over so quickly. ‘Silver Linings Playbook’ has come in for some deserved Oscar nominations but calling it ‘film of the year’ is a little bit of a stretch. Yes this is one romantic film that has the right mix of drama and comedy (even better is the fact it’s comedy that will make you laugh) and the acting is out of this world, but at the end of the day it’s script is seriously predictable, so much so that you’ll be able to predict the ending from the start of the film.

Based on a novel by Matthew Quick, ‘Silver Linings Playbook’ begins with Pat (Bradley Cooper – The Place Beyond The Pines, Hit And Run) being picked up from a mental hospital by his mother, Dolores (Jacki Weaver – The Five Year Engagement, Summer Coda). It turns out that he was placed in the hospital by the court after he viciously bashed a man who was having an affair with his wife, Nikki (Brea Bee – TV’S General Hospital, TV’S Breaking In).

However, the news that Pat is out of hospital doesn’t exactly thrill his father, Pat Snr. (Robert De Niro – Freelancers, Being Flynn) who believes that Pat may not be ready to be back in society. At first Pat does all he can to break his restraining order and tries to see Nikki but after being picked up by Officer Keogh (Dash Mihok – 2nd Serve, TV’S Greetings From Home) a couple of times and because of advice from his doctor Dr Cliff Patel (Anupam Kher – Midnight’s Children, Jab Tak Hai Jaan) Pat decides that while he does still want to end up with Nikki but is going to have to work slowly at it so he can show her that he has changed.

Then his life changes forever when his friends Ronnie (John Oritz – Jack Goes Boating, TV’S Luck) and Veronica (Julia Stiles – The Makeover, Between Us) introduce him to the damaged Tiffany (Jennifer Lawrence – House At The End Of The Street, The Hunger Games) and while many feel they are bad for each other they soon form a strong bond that the others, aside from Danny (Chris Tucker – Rush Hour 3, Rush Hour 2), just don’t seem to understand.

Normally a film’s good script can make bad actors look good, but this time around it is a string of good acting performances that make a predictable script a worthy watch. It’s a shame that David O’ Russell’s (The Fighter, I Heart Huckabees) script is easy to predict from the get go because the script works on so many other levels – it gives a great insight into mental illness, has wonderful relationships between most of the characters and provides a few laughs along the way.

But the best thing about ‘Silver Linings Playbook’ are the remarkable performances of its key cast. Bradley Cooper and Jennifer Lawrence both show that they are most remarkable talents that are well and truly above the franchises that have made them famous while Robert De Niro also puts in one of his best performances for years.

‘Silver Linings Playbook’ also helps out some of Hollywood’s fringe dwelling actors to show their worth as well. Jacki Weaver is absolutely sensational and does Australia proud while Chris Tucker reminds Hollywood that he can be a talented actor when given the right script to work with again.

‘Silver Linings Playbook’ may be a little predictable but it is still an enjoyable journey and should certainly be classed as a must see.