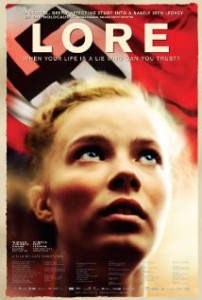 Summary: After her Nazi parents are imprisoned, Lore leads her younger siblings across a war-torn Germany in 1945. Amidst the chaos, she encounters mysterious Jewish refugee Thomas, who shatters her fragile reality with hatred and desire. To live, she must trust someone she was taught to hate and face the darkness within herself.

When Australian director Cate Shortland delivered her debut feature film ‘Somersault’ in 2004 it was labelled a cinematic masterpiece. The way she captured the emotion of her lead character and also the landscape of the Snowy Mountains was something that had never been seen before Australia. Therefore it comes as quite a surprise that it has taken Shortland until 2012 to deliver her eagerly awaited follow up film, ‘Lore’.

Now Lore finds herself having to embark on a journey across Germany with her brothers and sisters, Liesel (Nele Trebs – My Prince My King, TV’S SOKO Wismar), Gunther (Andre Frid – Der Fiend In Meinnem Leben, Bella Und Der Feigenbaum), Jurgen (Mika Seidel – Jorinde Und Joringel, Stopped On Track) and Peter (Nick Holasschke – newcomer) to their grandmother’s house. But Lore soon realises that while the war may be over, the horrors of war certainly aren’t and soon she faces a major dilemma, does she allow a young Jew, Thomas (Kai Malina – TV’S The Last Cop, TV’S SOKO Keipzig) travel with them for protection or does she stick to her beliefs that have been drummed into her by her parents.

To her credit Shortland doesn’t just make another World War II or another Holocaust movie, instead she touches on something from this period that has been rarely looked at what happened to the families of German officers after the Allies had won the war. And Shortland certainly doesn’t muck around with the story at hand either she takes the film into some dark places and also makes sure that the screenplay goes deep into the characters lives as the story plays out.

The most interesting side of ‘Lore’ revolves around the character of Thomas. Often during films set in World War II German characters are simply just shown as ‘evil’. Here you see that Lore really has had been ‘educated’ (or should that be ‘brainwashed’) in what Jewish people are really like, in a sense the film explains her hatred for Thomas and other Jews and thanks to the brilliant screenplay the audience can only watch in suspense as they wonder whether or not Lore can ever fully accept Thomas’ offer of help.

‘Lore’ also introduces the audience to two extremely talented young actors. Saskia Rosendahl has star written all over her, in fact she is actually very reminiscent to a young Naomi Watts or Nicole Kidman. She takes this dramatic role and delivers it with ease, and the fact she is likable certainly helps the film draw in its audience. Rosendahl is also well supported by Kai Malina a young actor who also stands out while playing an intense role in the film, he is also someone who looks like they will have a massive future ahead of them.

‘Lore’ is one of the best films to come out of Australia for a long time, it is a sensational film that is a must see for anyone who loves character driven films.

Other Subculture Media Reviews of ‘Lore′: Check Episodes #20 of our The Good The Bad The Ugly Podcast for a more in-depth review of ‘Lore’. Dave Griffiths also has another review of ‘Lore’ available on the Helium Entertainment Channel.