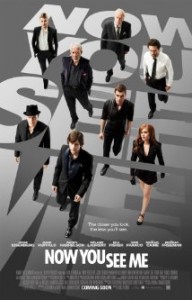 Hopscotch have just released the following clip from ‘Now You See Me‘.

AUSTRALIAN RELEASE DATE: 8 August, 2013
OFFICIAL SITE: http://www.hopscotchfilms.com.au/films/coming-soon/nowyouseeme-movie/
Now You See Me pits an elite FBI squad in a game of cat and mouse against “The Four Horsemen”, a magic super-team of the world’s greatest illusionists. The Four Horsemen pull off a series of daring heists against corrupt business leaders during their performances, and then funnel the millions of stolen profits into their audiences bank accounts, while staying one step ahead of the law.
FBI Special Agent Dylan (Ruffalo) is determined to make the magicians pay for their crimes-and to stop them before they pull off what promises to be an even more audacious heist. But he’s forced to partner with Alma (Laurent), an Interpol detective about whom he is instantly suspicious. Out of desperation he turns to Thaddeus (Freeman), a famed magic debunker, who claims the bank heist was accomplished using disguises and video trickery. One thing Dylan and Alma agree on is that…