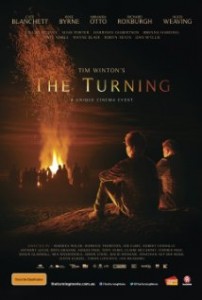 The first full length trailer for TIM WINTON’S THE TURNING has launched today and is now available for download.

The trailer highlights the linking and overlapping stories that explore the extraordinary turning points in ordinary people’s lives and is set to a backdrop of music from Melbourne band The Tiger and Me.

Tickets for TIM WINTON’S THE TURNING went on sale in early August. Demand has been very strong, with many early Q&A events already sold out. All sessions currently on sale as part of the limited season will screen with an interval, audiences at these screenings will receive a special 40 page program.

TIM WINTON’S THE TURNING was created by Robert Connolly (Balibo), who produced the film together with Maggie Miles and Arenamedia. Funding partners include Screen Australia, Film Victoria, ScreenWest, ABC and the Melbourne International Film Festival (MIFF) Premiere Fund.  TIM WINTON’S THE TURNING is co-distributed by Madman Entertainment and CinemaPlus.