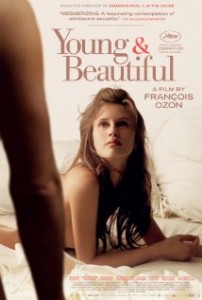 Summary: Follows 17-year-old Isabelle (Marine Vacth), from a comfortable Parisian background, as she responds to her thoroughly disappointing first sexual experience by becoming a high-class online escort. Through the lurid liaisons that follow, she grows increasingly emboldened, setting the stage for an emotionally charged climax.

Greg King: You can check out Greg’s Young & Beautiful review on The Good The Bad The Ugly Film Show Ep #77

Nick Gardener: You can check out Nick’s Young & Beautiful review on Southern FM

The silver screen has always had a fascination with the age old profession of prostitution. Whether it be a comedic glance in the form of Pretty Woman or a grittier investigation as in the confronting Australian film The Jammed. Even the small screen has explored the career with Satisfaction and the Billie Piper led British series The Secret Life Of A Call Girl. Now comes Young & Beautiful, a film from French auteur Francois Ozon who has previously brought us films like Swimming Pool and 2012’s brilliant thriller In The House.

Young & Beautiful follows 17-year-old Isabelle (Marine Vacth – Ce que le jour doit a la nuit, My Piece Of The Pie) a privileged Parisian student who after losing her virginity while at her parent’s summer house embarks on a personal journey that see her turn to frequent hotel trysts to make extra cash.

However it is not all sex and money for young Isabelle who soon learns it is hard to keep her new life secret from her parents Sylvie (Geraldine Pailhas – Divin enfant, La rupture) and Patrick (Frederic Pierrot – The Film To Come, Populaire) and her sexually inquisitive younger brother Victor (Fantin Ravat – Crossed Hearts, La mort n’oubile personne). Then there are the problems such as clients not wanting to pay full price and a big problem she ultimately ends up facing with her best client, Georges (Johan Leysen – Obsessive Rhythms, Het Vonnis).

On the surface this may appear to be a film in which the director wants to titillate his audience with some young flesh in a film that’s sex scenes have eared the film a R18+ classification in Australia. That however isn’t the case, instead just like his last film, In The House, Francois Ozon makes this a character study that lets the audience join their own dots on why the central character acts the way she does. There’s no simple explanation to why Isabelle decides that a career in prostitution is for her. One moment she is a young girl losing her virginity, the next she is in a hotel room with a client. While Ozon doesn’t spell it out for his audience he does leave some bread crumbs for them to make their own conclusions.

While far from a thriller Ozon’s style of filmmaking bring an ever menacing feeling to many of the film’s scenes. There’s the present worry of what a client may do to the young and seemingly naive Isabelle, while she herself seems to threaten some mystery as her sexual journey seems to make her more resentful towards her family. There are certainly some scenes which leave wondering what the now sexually corrupted young girl is capable of doing with her brother or step-father.

Young & Beautiful certainly does deliver a new star of French cinema in the form of Marine Vacth who really announces herself as an actress prepared to deliver a sensual yet dramatic performance when faced with scenes that some actresses would turn away from. The film also features a neat cameo from Charlotte Rampling (The Sea, Night Train To Lisbon) that will impress serious cinephiles in the audience.

Young & Beautiful is a well written and beautifully acted drama that shows a completely different style of coming-of-age storytelling.