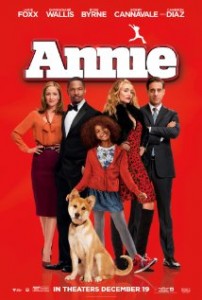 Summary: In the remake of the classic musical Annie (Quvenzhane Wallis) is a young orphan who lives with Hannigan (Cameron Diaz), a washed-up, alcoholic pop star who now lives off the money she earns for looking after a number of foster children… none of which she particularly likes.

Annie spends most of her time trying to keep out of Hannigan’s way and trying to piece together what happened to her parents who abandoned her at a restaurant years earlier. Things change for her however when a chance encounter occurs between her and wannabe-Mayor, mobile phone tycoon Will Stacks (Jamie Foxx), his assistant Grace (Rose Byrne) and campaign manager Guy (Bobby Cannavale).

Greg King: You can check out Greg’s Annie review on www.filmreviews.net.au

The critics seemed to by baying for blood for Annie before the film had even been released. Many were tipping that it was the kind of film that was perfect for a Worst Films Of 2014 list and many even seemed to rejoice in the fact that the cast seemed to be ever revolving door as producer Will Smith tried to put the film together.

Then of course there was disaster for the film’s distributors Sony when Annie turned out to be one of the films that the hackers managed to steal from them and release online weeks before it was due to the cinemas. Yes it really did seem like it was going to be a hard-luck life for Annie, but luckily this has turned out to be a film that comes with a few surprises.

By the time Annie did reach the cinemas early there should have been more than enough warning signs to indicate that Annie might have a few things in its corner. First of all its director Will Gluck has good pedigree being the man responsible for the fairly well received comedies Easy A and Friends With Benefits. Add that to the fact that the cast contained the likes of Jamie Foxx, Rose Byrne and Cameron Diaz and maybe it was time to start re-evaluating things.

Having said all that though Annie is the kind of film though that will divide audiences. Some will instantly dismiss it will others will be able to spot a certain quirkiness that makes Annie it an enjoyable, dumb-but-fun film.

Gluck it seems is the perfect man to be at the helm of Annie as he makes sure the film never takes itself too seriously, something that he sets-up from the get-go with an opening shot of a red haired Annie, showing he is only too aware of the original film. He then manages to keep the fun and games going while at the same time pointing out some very relevant facts such as how many black American students slip through the cracks when it comes to things like reading and writing. Gluck makes sure that the film is just the right amount of over-the-top, he allows Cameron Diaz to really go all out and also allows to Jamie Foxx to center himself in the middle ground between comedy and drama.

Even the early concerns that this was just going to be a rap/hip-hip version of Annie are put to rest with most of the original songs getting just the right amount of R&B flavour to make them new and interesting but not getting to the point where they are unrecognisable from the original. Bringing on board Sia to oversee a lot of the musical side of things was also a fair touch of genius from the people behind the scenes.

The one thing that will hit most people about Annie is how many actors use this film to showcase their many other talents. Rose Byrne has already shown the world she can do more than just drama with her comedic performances in films such as Bridesmaids and Bad Neighbors, here she shows she has another string on her bow by adding singing and dancing to her resume. Likewise Jamie Foxx capitalises on the fact that he already has a successful singing career behind him and manages to make himself a triple threat with music, comedy and drama.

Perhaps the biggest acting surprise in Annie though comes from pint-sized Quvenzhane Wallis who has already wowed audiences with her dramatic performances in Beasts Of The Southern Wild (which she scored an Academy Award nomination for) and 12 Years A Slave. Here Wallis also shows she is a worthy little singer and dancer and she quickly wins you over as she plays the sassy and intelligent Annie.

Annie isn’t exactly going to be the film that you are going to be raving about for years to come but it is fun enough that you won’t exactly be leaving the cinemas complaining about it either. It’s cute and funny, but never gets annoying, while it’s reworking of the story is just modern enough to make it work and create its own identity.

The real plus though are the acting performances. Everyone seems to be having fun and it shows on the screen, especially with Cameron Diaz who seems to love the fact that she is playing a role that completely allows her to lose control. Meanwhile the film even finds time to take a swipe at social issues such as modern politics and how the rich treat the poor making sure the film does have some substance as well. Also watch out for some smart cameos from Michael J. Fox, Sia, Rihanna, Ashton Kutcher and Mila Kunis.

Other Subculture Entertainment Annie reviews: For our full Annie review make sure you check out The Good The Bad The Ugly Film Show Ep #110. You can also read our review on The Book The Film The T-Shirt.