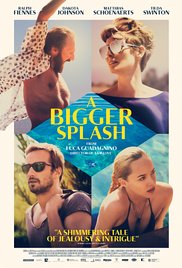 Summary: A remake of La Piscine from 1969 A Bigger Splash sees rock-star Marianne Lane (Tilda Swinton), who has lost her voice after recent surgery, on a vacation on the beautiful Italian island of Pantelleria, with her recovering drug-addict, filmmaker boyfriend Paul De Smedt (Matthias Schoenaerts).

Their enjoyable times of lazing in the sun however is cut short when Marianne’s manager and ex-lover Harry Hawkes (Ralph Fiennes) and his new-found daughter Penelope Lanier (Dakota Johnson) turn up unexpectedly and cause a range of issues to arise.

OUR A BIGGER SPLASH REVIEWS & RATINGS:

If you don’t like slow burns and films a little on the alternative then A Bigger Splash is not the film for you. On the other hand if you like me and like a film with a little bit of an edge to it then you might be right in your element with Italian director Luca Guadagnino’s latest offering – a film that certainly keeps its audience guessing right up until the final credits.

Now I would be lying if I sat here and said that A Bigger Splash is the perfect film because it isn’t. While Guadagnino does use the island’s beauty and perils brilliantly well the film does drag at times, especially early on. Of course anyone who can cope with that slowness is then rewarded handsomely with a second half that sees the character’s loyalties tested and even a massive amount of crime injected into the storyline, and it is those moments that will have the audience on the edge of their seat as even though some of the characters are unlikable you do actually find yourself caring what happens to them in the long run.

A Bigger Splash is really a film told in two halves. The first half of the film is brought to life with some good acting performances that will be loved by those who like serious cinema. Tilda Swinton is at her usual best despite being put to the test by playing a character that can barely say a word. To her credit Swinton instead lets Marianne put all her emotions across powerfully for a range of looks and normally aggressive forms of body language.

Swinton is well supported by Ralph Fiennes who seems to enjoy play the eccentric and very bossy Harry Hawkes. No matter how slow the film is at times Fiennes completely steals a lot of the scenes that he is in, especially one in which he strangely dances for nearly five minutes, a scene which it seems he had a lot of fun filming. His later menacing scenes with both Swinton and Schoenaerts are also standouts that really bring the film to life as well.

Cast wise the audience also gets to see a very different side to Dakota Johnson that what we have not seen previously as well. While audiences got to see her as sweet and demure in Fifty Shades Of Grey and shy and reserved in How To Be Single here Johnson is completely transformed into a sultry and seductive blonde and shows that she is more than capable to match it with her much more experienced cast.

The second half of the film is where Guadagnino really brings the film to life though. As tension reaches a boiling point and a good crime story moves to the fore (don’t worry you won’t read any spoilers here) the film moves up several gears and takes a turn to the dark side. The infusion of glimpses of Europe’s refuge crisis all throughout the film also enhance the latter parts of the storyline as well, which shows that despite the films meandering style early on there was some form of structure there all along.

While A Bigger Splash may not be enjoyed by those who enjoy their normal popcorn movie, this is a film that will be loved by those that love their films a little left of centre and a good dose of darkness.

The film is set on the volcanic island of Pantelleria, which lies off Sicily, and centres around four self destructive characters caught up in a complex and complicated relationship. There is rock star Marianne Lane (Swinton), something of a cross between Bowie and Chrissi Hynde, who is recuperating following throat surgery. She is enjoying a nice holiday with her filmmaker boyfriend Paul (Belgian hunk Matthias Schoenaerts), a recovering alcoholic. Both Marianne and Paul are psychologically wounded and carry mental scars.

Then their idyllic holiday is interrupted by the arrival of flamboyant record producer Harry Hawkes (Fiennes) and his estranged daughter Penelope (Dakota Johnson, from the Razzie award winning Fifty Shades Of Grey, etc). Marianne and Harry share a past history. Indeed it was Harry who introduced Marianne to Paul in an effort to get out of the relationship, and he is now full of regrets over that decision. And the sexually precocious Penelope sets her sights on seducing Paul. The atmosphere is charged with suspicion, jealousy, and personal revelations, and there are palpable undercurrents of sexual tension, lust, temptation.

This is a juicy role for Fiennes. This is Fiennes like we haven’t seen him before on screen – lively, brash and flamboyant – and he chews the scenery with his manic performance. He normally has such an intense screen persona, but here he is such an ebullient character who also strips off and dances and swims naked and shows off rare comic timing. It was his performance in The Grand Budapest Hotel that convinced director Guadagnino that Fiennes was suited to the character here.

Swinton has the more challenging role as Marianne, who is largely a silent participant in events. Her character is unable to speak, so Swinton has to convey a wide range of emotions through gestures and facial expressions. Schoenaerts has plenty of charisma and is solid as the brooding Paul.

Johnson’s breakthrough role was as the ingenue introduced to the world of sexual games and b&d in the risible Fifty Shades Of Grey, and here she plays an outrageous, sexually aware Lolita-like adolescent, but her character is a little underdeveloped.

The film features an eclectic soundtrack that includes The Rolling Stones, Harry Nilsson and Captain Beefheart. And Fiennes’ character narrates a wonderful anecdote about working with the Rolling Stones during the 80s, telling an apocryphal story about the recording of the track The Moon Is Up for their Tattoo You album – the story is apparently true, but the Harry Hawkes character and his involvement is not.

A Bigger Splash has been shot on location on Pantelleria by Guadagnino’s regular cinematographer Yorick Le Saux, who gives the material a sunny, washed out, burned look that complements the setting. The swimming pool itself almost becomes a nother character in the carnal edgy drama. The title is also deliberately evocative of David Hockney’s 1967 painting of the same name, and also recalls Francois Ozon’s film Swimming Pool. The itself has something of a European sensibility in its approach to sex and nudity. Guadagnino’s regular editor Walter Fasano uses abrupt cuts to give the film an unsettling and disjointed feel.

But it remains to be seen whether A Bigger Splash will connect with an audience and make a splash at the box office.