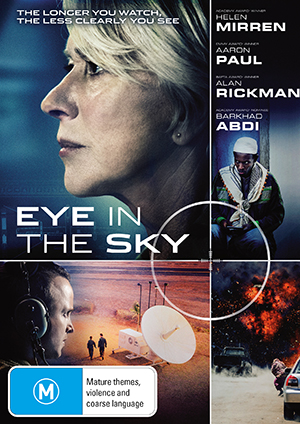 Summary: High ranking British officials Colonel Katherine Powell (Helen Mirren) and Lt. General Frank Benson (Alan Rickman) think that their hard work is finally paid off and they have been able to track the location of a number of terrorists in Kenya. When it is determined that all the terrorists will be in the same building for a meeting a plan is put in place to use drones to watch their movement and pounce when the time is right.

But when things start to go wrong and Powell and Benson realise that they are going to have to use American drone pilot Steve Watts (Aaron Paul) for a kill mission, the whole case becomes political. That then esculates when a young girl innocently goes into the ‘kill zone’ to sell bread.

OUR EYE IN THE SKY REVIEWS & RATINGS:

Director Gavin Hood seems like he has a lot to say about the military and Government officials. Over the years he has delivered movies such as Rendition (which looked at CIA interrogation techniques), X-Men Origins: Wolverine which despite its blockbuster appeal was critical of military experiments on soldiers and his big journey into the sci-fi genre was Ender’s Game a film that was extremely critical about warfare and its involvement with children. Now Hood explores the notion of how politics can interfere with modern warfare with his latest offering, Eye In The Sky. Of course the importance of this film takes another big step forward after the sad death of Alan Rickman, this is his final performance on screen.

As a film itself Eye In The Sky holds its own but the similarities between it and a movie that surfaced last year called Good Kill (starring Ethan Hawke) are alarming. Surprisingly the two films would actually fit together as a good companion piece (take note those who program the films at The Astor), while Good Kill explored the effects that drone warfare has on the pilot that has to deliver the ‘kill’ Eye In The Sky looks at the dangers that occur when politics and modern warfare come face-to-face together.

To Hood’s credit Eye In The Sky would not have been an easy film to direct as the film is almost like two different films in one. While the shots on the ground in Kenya call for chases and action the scenes set back in England call for tense maybe dialogue driven scenes. To Hood’s credit he pulls off both equally as well as each other and it is absolute credit to him that some of the scenes set in the political offices are just as tense as the moments of action in Kenya. Ender’s Game taught as that Gavin Hood was a director to watch and Eye In The Sky shows audiences worldwide that he is a director that at the top of his game can produce a sleek military thriller.

To give the film credit though it really does explore the issue of politics and public relations getting in the way of modern warfare remarkably well. The film’s theory is probably best described by a masterful piece of screenwriting by Guy Hibbert (who also wrote Five Minutes Of Heaven) who at one point has the politicians debating whether it would be better PR for them if they let the terrorists do their terrorist attack or whether they kill an innocent child along with the terrorists. It’s just one bit of writing that will stick with me for a long time.

When your two leads are Alan Rickman and Helen Mirren of course the acting is going to be top notch, and while Mirren once again puts in a brilliant performance you can only wonder whether or not she is miscast and it seems implausible that a woman of her age would still have a military career. Rickman again also puts in a good performance but just seems to breeze through in a role that doesn’t call for him to do anything special. And for those wondering if this is a time that Aaron Paul gets the chance to put his teeth into a meaty role, think again because he like Rickman just seems to get a dream run without having to do much.

While Eye In The Sky is not as good as Good Kill it is still a film that is worth taking a look at if you want to see a film not afraid to raise some questions about modern day warfare. Gavin Hood brings just the right amount of suspense to the film while Rickman and Mirren and predictably good in their roles. Not quite an Oscar worthy film… but not far off either.

Other Subculture Entertainment Eye In The Sky reviews: You can listen to Kyle and Dave review Eye In The Sky on The Popcorn Conspiracy Ep #002 and The Good The Bad The Ugly Film Show #171.