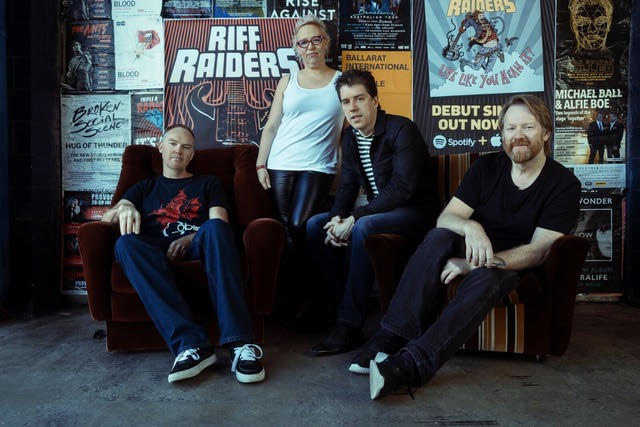 Melbourne’s very own Riff Raiders are hitting 2020 with a bang. Aside from heading out on a tour that will see them headline the Kilmore Rock Festival the band also have their vinyl Double A-Side single landing on February 18th through Rue Morgue Records and then release their brand new album Rock ‘N’ Roll Daydream in March.

The band’s debut album Live Like You Mean It was released to critical acclaim and won the band a legion of fans. When we recently sat down to interview Riff Raider’s very own Marty Powell he admitted that it was something that was weighing on their mind as they worked on the new album. “I didn’t feel pressure when I was writing the songs because that felt like a bit of a break-through,” he says. “We were doing a lot of shows and we felt like a band on a run so the songs were coming from excitement and adrenalin so that worked really well.”

“But when it came to recording them we really wanted to approach them differently,” he admits. “I started the album about a year ago and like what happens with other artists – I just wasn’t happy with it and that is why the line-up of the band changed. That was so we could make it as good as we good.”

As we talk about the events that surrounded that moment we talk about what a drastic decision it was to make. “It was a really important decision to make,” agrees Powell. “The guys we were playing with were great at that level but musically if we wanted to go to that next stage we had to do something, and it was pointed out by the producer we were working with at the time. But yeah it was painful. But I thought if we are going to go to all this trouble and we have the best batch of songs that we can come up with then we really have to do them justice.”

“So we decided that we needed a different rhythm section,” he continues. “I think different is a better word than better, we just needed a different style and then I worked with a different producer that pushed it to a whole another level again. But we didn’t rush into it. We did a lot of shows with the new line-up to break in the band again, which I think you can hear on the recordings. It held things up but it also made things better. It also gave me the opportunity to define the songs a bit more and by re-recording them we were able to give everything a second go. That really helped.”

The work of the line-up is clearly evident on the Double A Side that is about to be released by Rue Morgue and they are both tracks that Powell are clearly proud of. “You’ve got Loaded Gun and Best Day Ever,” he explains. “They are the lead tracks off the new album – Rock ‘N’ Roll Daydream. There are two very different sounds of the band on show with these tracks.”

“Loaded Gun has that classic kind of slide, kind of a classic rock sound to it,” he says continuing. “The other track that is there is still rock but I guess it has more of 90s kind of vibe to it… it is a bit more fun. We really wanted to show different sides of the band. It is all rock, the title of the album pretty much explains that, and we aren’t ripping anything off but when I write the songs I always try to think about what kind of rock music I like which is all different styles. So when you listen to the album you hear those different styles as well, and the idea is that this kind of music has been around for a long while so we just try to do songs in this genre. It isn’t exactly re-inventing the wheel but putting more wheels on sale I guess is the best way to describe it.”

The one thing that really strikes you about these two tracks is the catchiness of them Walk away after listening to Best Day Ever and you will be humming it for the rest of the day. “We’re all about hooks,” says Powell laughing. “It’s not even about what we do in the studio, it’s about how we write the track and then arrange it with the band. You get to do that in the studio as well but when you see us live it is there as well. That comes back to that classic type of song-writing, it is heavy but you still want to be able to whistle the tune. That was The Beatles concept – is the song memorable? Playing that kind of music though can be difficult, take Loaded Gun for example, you are holding it back a bit. It’s like AC/DC when you get a band to groove like that it is quite powerful, but that is hard to achieve just smashing away and doing what you like. There is restraint there but you also want that hook side, so you try to go for both.”

Whatever the recipe is that Riff Raiders are working on it obviously works because both Loaded Gun and Best Day Ever are something very special indeed.