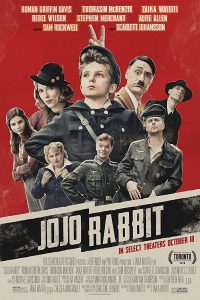 Summary: A young boy in Hitler’s army finds out his mother is hiding a Jewish girl in their home. 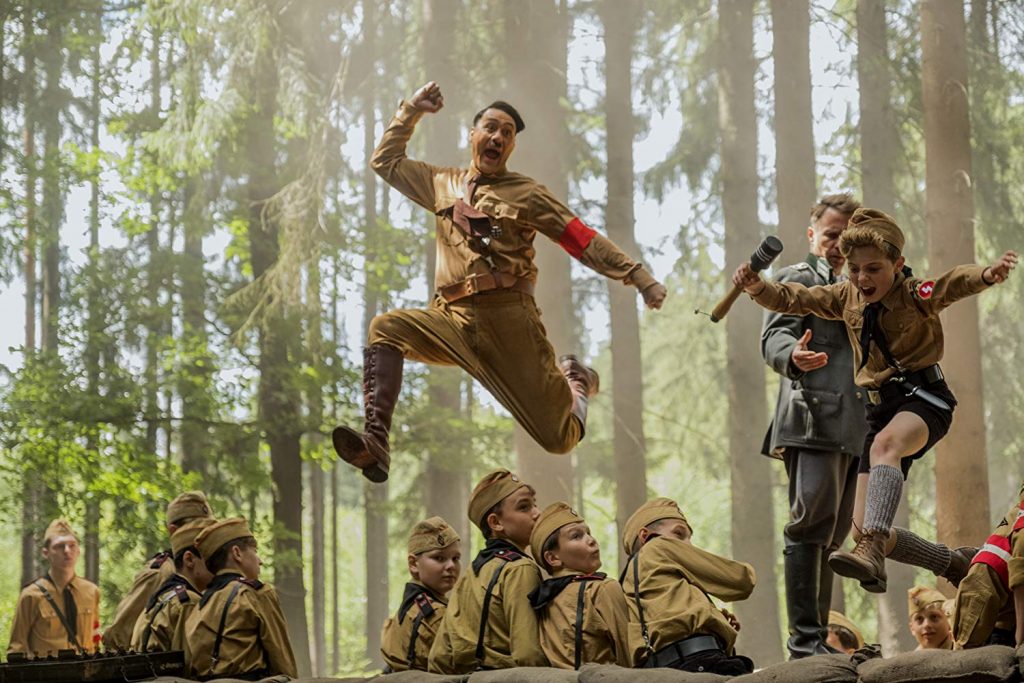 Is it okay to ever try to get a laugh out of somebody’s misfortune? How about trying to get a laugh out of one of the worst massacres to have ever happened in human history? It sounds like a brutal question, yet it was a question many were asking after the announcement that filmmaker Taika Waititi was going to be making a comedy that featured himself playing Adolf Hitler while centering on a young Hitler Youth member.

The idea of something funny coming out of such a tragedy is almost unfathomable. To be honest, as someone who has interviewed a Holocaust survivor in person I was one of the people that was questioning whether or not JoJo Rabbit should ever have been made. That was before I saw the film though, afterwards I now find myself championing the film, encouraging others to see it as it delivers a powerful message that is still very relevant to society today.

The reason for my turnaround is that Waititi takes his central character, named JoJo (Roman Griffin Davis – Silent Night), on a journey of learning, discover and intense character building. While early on JoJo is excited about the training he is receiving from his military trainers Captain Klenzendorf (Sam Rockwell – Moon) and Fraulein Rahm (Rebel Wilson – Pitch Perfect) and the adventures that his training will lead to, his values are later put to the test when he discovers that his mother, Rosie (Scarlett Johansson – The Avengers) is hiding a Jewish teenager, named Elsa (Thomasin McKenzie – The King), in a secret room in their house.

There are several things that make JoJo Rabbit such a brilliant and interesting film. First it is told from a point-of-view that we have rarely got to see in cinematic history. Normally when a Nazi is shown in a film that are pure evil, and therefore the events of World War II are rarely shown from their point of view. Here we see these events through the eyes of a young member of the Hitler Youth and it is a different perspective to what many of us would have assumed it would be.

Through the eyes of JoJo we see the hatred that has been forced into him by those around him and of course the propaganda that he sees daily from the man he idolises – Adolf Hitler. But then we also see the utter confusion that he goes through as he meets Elsa. For the first time he is forced to see a Jewish person as a human and he is forced to question whether or not the stories he has been told about them being monsters is true or not. Then there is also the fact that by his own beliefs his mother is now an enemy of the State.

Audiences should be prepared to be put through a range of emotions when they watch JoJo Rabbit as well. Waititi is a smart enough filmmaker to know where the right places are to get a laugh and when it is not acceptable to do so. In fact his timing and pace throughout the film are quite genius and there is one moment in this film I can guarantee where every member of the audience will be in tears.

In his own performance as Hitler Waititi puts in a comical yet balanced performance. The audience needs to remember that this is not Waititi’s view of what Adolf Hitler was like and his slap-stick portrayal is not there to simply garnish laughs – instead it is there to show how the dictator may have been viewed by those that idolised him during the time period.

As a film JoJo Rabbit is also lifted by its fantastic performances. The young cast of Thomasin McKenzie and Roman Griffin Davis put in performances well beyond their years and it is easy to see that the two are destined to become stars. Scarlett Johansson is amazing despite her limited screen time but the true brilliance here comes from Sam Rockewell. This often under-rated actor again puts in a stunning performance as he manages to mix both comedy and drama together sensationally well. It is almost criminal that his performance here didn’t warrant more attention when it came to awards time because as he did in Richard Jewell and The Way, Way Back he once again steals the limelight in every scene he is in.

Any cinema goer has the right to be sceptical over whether or not they think JoJo Rabbit will work as a film. As I mentioned earlier it seems almost inconceivable that any filmmaker could make a comedy about the time of Holocaust and have the film work tastefully – yet somehow Waititi has done just that right here.

As a film JoJo Rabbit takes its audience on a journey alongside its main character. The film does have the power to make you laugh but it also has the power to make you cry. At times the film may not be easy to watch but at the end of the day this is a film so powerful that it deserves to be mentioned alongside great Holocaust films such as Schindler’s List and The Boy In The Striped Pajamas.

Our JoJo Rabbit review that appeared in ‘The Phuket News’ can be read at this link – https://www.thephuketnews.com/down-the-nazi-rabbit-hole-%C2%A0taika-waititi-creates-a-comedy-classic-from-tragedy-75360.php