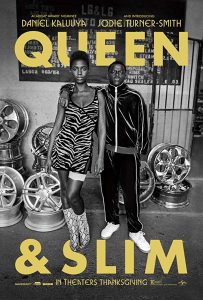 Summary: A couple’s first date takes an unexpected turn when a police officer pulls them over.

There have been a number of films over the years that have dealt with the topic of white Police violence against black citizens. Films like Fruitville Station and The Hate U Give have shown a spotlight on the issue with some sheer cinematic brilliance. Now comes Queen & Slim a film that explores the topic while bordering on being a genre flick.

Directed by Melina Matsoukas (Insecure) Queen & Slim possibly depicts one of the worst Tinder dates of all time. Bored and frustrated are having one of her clients put to death lawyer Queen (Jodie Turner-Smith – Jett) responds to a Tinder request from the quiet and law-abiding Slim (Daniel Kaluuya – Black Panther). However, the date ends disastrously when on their way home they are pulled over by a white Police Officer. When he pulls his gun and shoots Queen Slim is forced to kill him in self defence.

Convinced that nobody will believe their story the pair begin a journey across America aided by Slim’s ex-military turned criminal Uncle Earl (Bokeem Woodbine – Spider-Man: Homecoming) as they try to evade the manhunt that is now coming their way. Meanwhile the rest of America takes sides – some say they should be brought in as criminals while others want to help them escape Police.

The first thing that I should say about Queen & Slim is that this is not a multiplex film. I’ve read comments that the film is over-long etc. That simply is not true, but as you view the film your realise that Matsoukas has shot this is a way that is reminiscent of the arthouse films that Larry Clarke made in his heyday – films like Bully and Kids that made a point and stuck with you long after the credits had rolled.

The style in which Matsoukas has shot this film is hard-hitting and gritty. She is a filmmaker who is obviously not afraid to take risks – how many other filmmakers these days would have the courage to have an entire scene shot from a camera mounted and locked off on a car. Her style also allows the audience to feel like they are part of the action which in turn makes you feel a lot closer to the two main characters – Queen and Slim. The result is an understanding and closeness to them that most other filmmakers could only dream about capturing.

Having said that though there are some weaknesses with the film. At times it feels like as a director Matsoukas has been let down by the screenplay she is working with. There are too many times during the film were events happen that should be treated as major events but are never fully explored. From a man who wants to talk to them but is hit by their car through to a teenager who idolises them despite his father’s beliefs, these events happen way too fast and the audience never really get to feel the full affect of the events that surround these characters.

The film is at its best though when it allows the audience to soak up the locations and the characters that the characters find themselves around as the film goes on. One of the best characters in the film is Queen’s Uncle Earl and because of the extended time you spend with him as character the impact of his involvement in the story weighs more heavily for the audience watching. Likewise when Slim takes Queen to a dingy blues bar – the suspense is through the roof as you are never really sure whether the couple are welcome there or whether someone will turn them in.

One of the highlights of the film though are the acting performances. If nothing else Queen & Slim has introduced the cinematic world to two future stars. Daniel Kaluuya and Jodie Turner Smith put in two stunning performances. No matter whether they are asked to deliver a deep and meaningful dramatic scene moved along only by dialogue or asked to perform graphic sex in the front seat of a car the two deliver in spades. As the film meanders along you get a strong feeling that these two actors are people we are going to be watching on the big screen for many years to come.

As a film Queen & Slim does have its flaws but it also has moments of true cinematic awe as well. Two brilliantly performed roles by the film’s stars makes up for the film’s errors while Bokeem Woodbine makes a welcome return in a truly memorable performance that only he could deliver. Likewise the film introduces us to a filmmaker that can only be described as a director that we all need to become aware of. Melina Matsoukas’ gritty style of filmmaking is a welcome relief in a cinematic world where it feels like every film needs to look ‘clean.’ Hard-hitting and at times experimental Queen & Slim is not a film that is easy to forget.