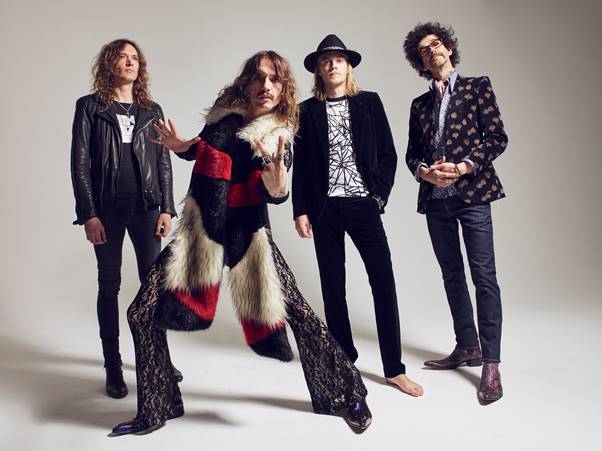 There has been a love affair between Australia and British hard rockers The Darkness ever since their debut album Permission To Land which was released back in 2003. Ever since then the band have sold out every tour they have ever done here and thanks to their 2019 album Easter Is Cancelled the band are now popular with the younger generation as well.

As I get the chance to sit down and chat to band member Rufus Tiger Taylor it is clear to hear the excitement in his voice. “I just can’t wait,” he says. “Every time we come to Australia we have such a great time. It is just one of the funniest places and obviously the shows are going to be really great and it is always fun to look at the Oz schedule in terms of days off because as a band we like to do the occasional bit of surfing and mainly a little bit of tennis… and that can get pretty heated.”

That news got us into a rabbit-hole as we discussed the various great places there are to surf in Australia. “I actually learnt how to surf in Byron Bay,” he explains. “That was years ago and that is a great spot, but sadly I don’t think we are playing Byron this time. But I also love the chance to surg at Bondi as well.”

The band are also very much aware of the strong fan base that they have here and Taylor is quick to admit that they are another of the reasons why they love to tour here so often. “They are just brilliant,” he says when we discuss the fans and how they always seem to sell out their Australian shows. “They are brilliant every single time because they know how to have a good time. Everybody is always up for it and there is never any dickheadery, if that is even a word, but everyone always seems to be on the same level and Justin just seems to order and they do. They are just a great crowd, always have been and that is why we are so excited to be doing this. Especially now that the new album is out because we have seen a lot of growth for us in Australia since the album came out.”

Taylor is certainly onto something there. Easter Is Cancelled is an album that seems to have put The Darkness on the map with a whole new generation of Australians. Not only do the album do well in the charts but the big single “Heart Explodes” also found itself on a lot of different radio stations play lists. “It really has been great,” says Taylor reflecting on it. “You know when you write an album that is pretty much a journey album, and also a concept album, you don’t imagine that you are going to nail it for everyone. Normally with that kind of album everybody seems to have a different opinion.”

“But this seems to have been unanimously accepted,” he continues. “That is really cool. We all had our different picks of what songs we thought would do better and mine was “Heart Explodes” so that was really good.”

It is obvious that Easter Is Cancelled is an album that the band are proud of so there is little wonder that they plan on playing it from start to finish during their Australian tour. “We are playing the whole thing,” he says with pure joy in his voice. “We were so proud of Easter Is Cancelled we were just like, fuck it lets do the whole thing from start to finish exactly the way that it is on the album. We decided to do that because we really like it and it is an exciting step and adds a lot more drama to it especially with how hard some stuff is to play, but we love a little challenge. We do absolutely everything ourselves on stage so it is rewarding as well.”

“That obviously takes out forty-five minutes of the total set,” he says continuing to talk about what Australians can expect from their show this time around. “Then we have what we call the party set and we really just chose our favourites. Whatever is really working and has a flow together. Everything has to fit together, we do put our set lists together really seriously. Like at the start of the European tour we were doing “Black Shuck” at the start of the encore and it just wasn’t really landing, and we had to look at where we put it, is it the end or does is work better as an opener? But we already have a hell of a opener.”

No matter the order of the songs The Darkness are going to give you a tour to remember so make sure you grab your tickets right now. 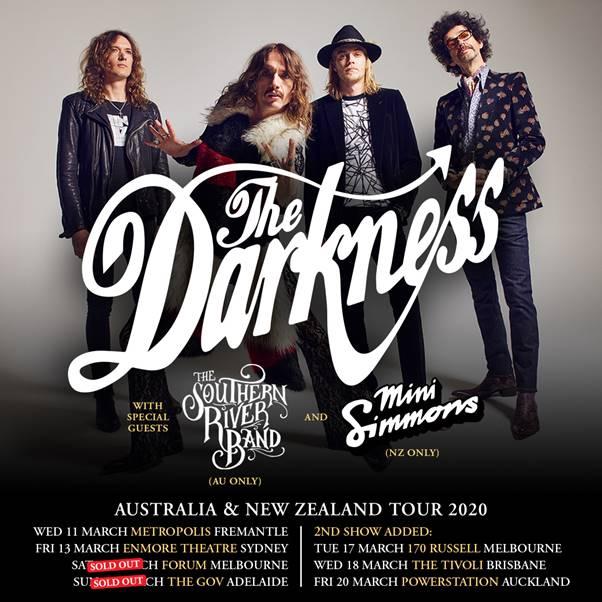