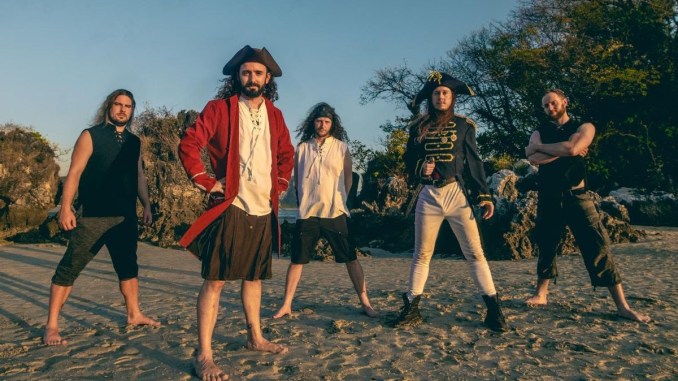 A lot has happened in the last year for pirate metal outfit Alestorm. The band travelled to Thailand to work on their brand new album. Then Covid-19 hit – their tours, including a trip to Australia for the Download Festival were cancelled and when I get a chance to talk to frontman Chris Bowes he is at home in Scotland waiting for Curse Of The Crystal Coconut to get released to the band’s adoring fans.

“It is a pretty relaxed affair, really,” says Bowes laughing when I ask what is like to be in the studio with Alestorm when they are recording an album. “This time we flew to lovely Thailand to make the album because I know where you are January is really nice, but up here in Europe January sucks donkey balls so we thought ‘let’s go somewhere warm.’ So we ended up going to Thailand and we just had a party on the beach for a month.”

“But yeah it was a real relaxed experience,” he says as his voice take on a more serious tone. “We were there for three or four weeks and we would wake up in the morning and we would jump in the pool and have a cocktail. Then you would maybe go for a walk and look at the crazy mountains there and then you would just pop into the studio and record guitars or vocals. It is just really easy and relaxed. And our songs are easy, our songs are so simple – they really are just four chords with a stupid accordion melody… anybody could do it.”

Bowes is quick to admit that it is that simplicity that makes the studio process a lot better. “Being in the studio is not a glamorous time,” he explains. “It’s like… here play this riff a hundred times. So you play it a hundred times and then the producer says ‘well that sucks let’s play it again.’ Then you play it another one hundred times and they are like ‘yeah that will do.’ You get it done but the fun always starts when you get to do the backing vocals together. You all get in the room together and you get a few beers into you and then you are like ‘right now we are going to sing this stupid chorus together.’ Backing vocals day is just swearing into a microphone while drunk… yeah making our albums is pretty easy.”

As we talk more about how much fun it was to put together an album in Thailand I ask Bowes how the band deals with things if they aren’t in a great mood when it is time to record or write their albums. “I’m not really emotional when it comes to song-writing,” he says after thinking for a moment. “I just kind of write stuff and then be like ‘well that will be a really cool fucking hook.’ I have tried to channel my emotions into songs before or I’ve tried to write a song about how I really feel, but I just can’t do it. Maybe I’m like an emotional void or something so I feel that I can do our music regardless of how I am feeling.”

“I think what does inspire me to write these songs  is imagining playing them to a huge audience,” he says continuing. “I start to find myself thinking ‘oh wow, imagine this piece here’ or ‘imagine the crowd singing along here.’ I just get this feeling of imagining how a song will sound live and that is what inspires me to write songs. So there isn’t really any emotion involved in it except for ‘holy fuck this would be such a party.’ 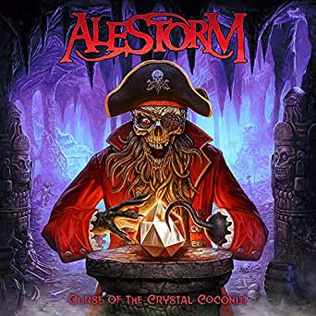 Cure Of The Crystal Coconut is out now through Napalm Records.