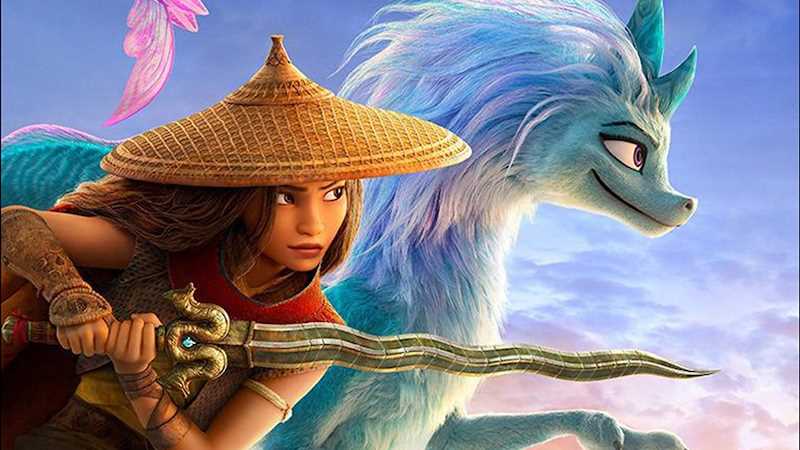 Summary: A young warrior sets off to find the last remaining dragon after her world faces annihilation at the hands of some dark monsters.

It is hard to believe that it has been twelve months since Disney released a brand new film straight to cinemas… yes even the House Of Mouse was not immune from the great Covid cinema lockdown worldwide. The great news is that Disney returns to cinemas this week with a film that is arguably one of their greatest pieces of animated brilliance – Raya And The Last Dragon.

It is rare these days to find an animation that has adults staring wide-eyed and excited at the screen the way that so many of the Disney classics did when we were kids but such is the stunning artwork and captivating storyline of Raya that it certainly wakes up your inner child.

Inspired by South East Asian culture the film follows the adventures of Raya (voiced by Kelly Marie Tran – Star Wars: The Last Jedi) a young warrior who is trained by her father Benja (Daniel Dae Kim – Hellboy) to guard the last remaining piece of dragon power contained in a magical gem stone.

They live in a world divided, a place where every tribe has fended for itself since a great war that saw the destruction of the dragon race at the hands of evil creatures known as Druuns. Since then the land of Kumandra has become separated and the various tribes do whatever they can to survive while people such as Benja do whatever they can to try and reunite everybody once again.

However, when Raya is tricked by Namaari (Gemma Chan – Crazy Rich Asians), a young warrior from another tribe, the gem breaks and each tribe takes a piece for itself at the same time the spell is broken and the Druuns once again return and begin to destroy what is left on Earth. With the world then slowly disappearing and mankind being wiped out Raya begins a journey to try and find the last remaining dragon – Sisu (Awkwafina – Ocean’s Eight).

Excuse the pun but the magic of Raya And The Last Dragon is out of this world. The storyline here is involving and creative and this time Disney have realised that they don’t need a song every five minutes to move things along a little bit. In fact this time around the screenwriters and the literal team of directors that worked on the film get everything right.

The story itself draws you in the same way as other modern day fantasy tales, such as A Writer’s Odyssey, do while the film doesn’t exactly cater for extremely young children as it mixes fight sequences with chase sequences and even finds a way to throw in some humour without it ever seeming out of place. The world created here is as imaginative as the worlds film lovers a generation ago found themselves escaping to with films like The Neverending Story and The Dark Crystal and while the story is in depth it never loses its audience and instead keeps them on the edge of their seats.

What makes Raya And The Last Dragon come together so well though is the amazing artwork with the animation. There are times with this film where you find yourself watching the screen and believing you are watching actual actors and actresses as the artwork is so realistic – the same can be said for the scenery which was inspired by the filmmakers trips to Thailand, Vietnam, Cambodia, Laos and Myanmar. Part of what makes the animation of this film work so well is also because the art team decided to make the characters look like the actors and actresses playing them. As soon as Benja walks onto screen the likeness he has in appearance to Daniel Dae Kim is astounding – and yes the filmmakers even find a way to make Sisu look like Awkwafina.

Raya And The Last Dragon is one of the cinematic highlights of 2021. Disney manage to bring everything together in such a way that the capture that old school Disney magic that has been missing from the company for quite awhile. This is truly a film for people of all ages as even adults are going to be captured by the magic and imagination of Raya.

Other Subculture Raya And The Last Dragon Reviews:

You can also check out our review for Raya And The Last Dragon in The Phuket News – https://www.thephuketnews.com/disney-is-back-raya-and-the-last-dragon-reigns-supreme-79250.php