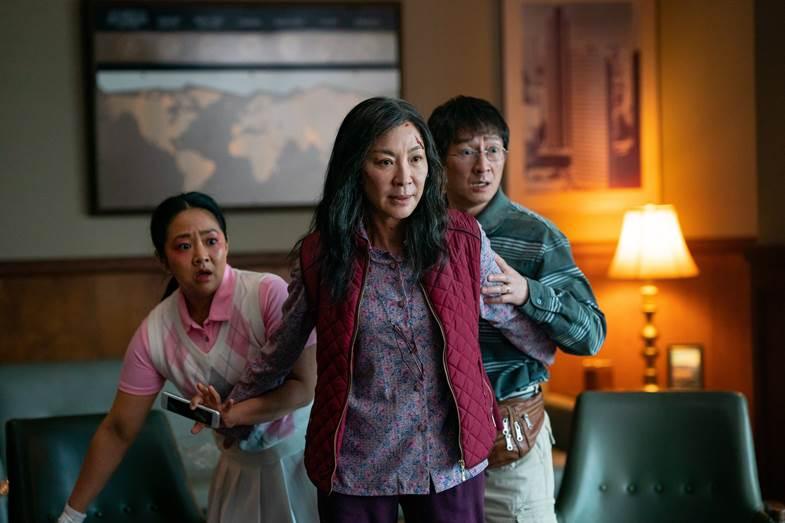 Summary:  An aging Chinese immigrant is swept up in an insane adventure, where she alone can save the world by exploring other universes connecting with the lives she could have led.

OUR EVERYTHING EVERYWHERE ALL AT ONCE REVIEWS

David Griffiths’ Everything Everywhere All At Once Review:

There seems to be an element creeping through Hollywood where some filmmakers seem to think that a film needs a ‘weird’ element to try and set it apart from other films that are currently in cinemas. We saw it earlier this year with the film C’mon, C’mon where the filmmakers thought that filming it in black and white would perhaps compensate for the fact that the characters are slightly unlikable. Now comes perhaps an even bigger crime against cinema – Everything Everywhere All At Once – a film that has an original storyline, some great action pieces but is ultimately ruined by some scenes that are just too weird for the average cinema goer.

Directed by Dan Kwan and Daniel Scheinert (Swiss Army Man) the film centres around a family made up of strong but judgemental mother Evelyn (Michelle Yeoh – Tomorrow Never Dies), emotionally lost husband Waymond (Ke Huy Quan – The Goonies) and daughter Joy Wang (Stephanie Hsu – The Path) who feels that she is constantly judged by her mother.

The family at hand is a family in turmoil, not only is Joy becoming estranged from her mother and father, Waymond  is looking for a way out and the family Laundromat is coming under intense scrutiny from the taxation office.

With all of that happening  Evelyn soon finds out from a Waymond from a different dimension that there is an inter-dimensional war going on and that she is a very big part of it. As she becomes more involved in this inter-dimensional rift though she finds herself becoming a ‘wanted’ woman by the authorities in her own dimension.

What we have with Everything Everywhere All At Once is a film that shows that even the most creative storyline can be totally destroyed by some simple stupid mistakes. The original premise of this film is great – a family internally tearing themselves apart with a sci-fi fantasy element that is as creative as anything we ever saw with The Matrix but sadly once this film begins to delve into areas of people having to insert items into their butts and a dimension of people with weird sausage hands the film jumps the shark in a way that almost makes it unwatchable.

How such creative filmmakers can fall into such a juvenile trap is almost incomprehensible. Early on the film contains such heart as it explores deep topics such a daughter feeling that she has been rejected by her parents through to a husband that is convinced that his marriage is over. The fact that Kwan and Scheinert can mix topics as deep as those with great looking fight sequences shows pure class – that is why it is so disappointing that the film ultimately becomes a farce beyond stupidity.

The shining lights in this film are the actors. Michelle Yeoh leads from the front with a brilliant performance that one again sees her mix heartfelt scenes with her family with well-choreographed but natural looking fight scenes. She is well supported by Ke Quy Huan who is called upon to play a range of different Waymonds and does an exceptional job with each. Last but not least is Stephanie Hsu who announces herself as a star of the future in a role that sees her deliver some of the more heart-wrenching moments of the film.

Everything Everywhere All At Once should serve as a warning to all filmmakers out there. You can the best idea that anyone has ever had for a film but you can let yourself down by going just that little bit obscure. Once again A24 show as a company that their films are either spectacularly brilliant or ruin themselves with unwatchable weirdness.

Other Subculture Everything Everywhere All A Once Reviews:

You can read our review of Everything Everywhere All At Once that appeared in The Phuket News right here – https://www.thephuketnews.com/everything-everywhere-all-at-once-%E2%80%92-or-not-84162.php