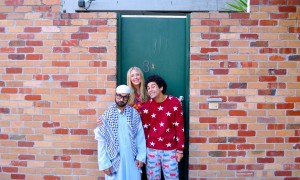 Two Refugees and a Blonde will launch during Refugee Week with events at Federation Square Melbourne (15 June) and a performance at Amnesty Refugee Network’s Festival of Hope on World Refugee Day (20 June), while simultaneously premiering globally online via YouTube.

A special benefit preview screening of Season One will occur on 24 June at Classic Cinemas Elsternwick Melbourne, with proceeds going to the Asylum Seeker Resource Centre. The benefit will include live entertainment and a chance to meet the cast and director. Tickets are available here.

You can listen to or download our Shahin Shafaei interview right here.