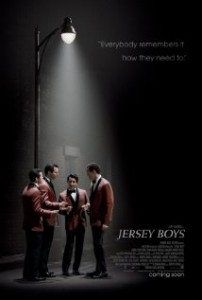 Summary: The film tells the story of four young men from the wrong side of the tracks in New Jersey who came together to form the iconic 1960s rock group The Four Seasons, and the rise of star Frankie Valli.  The story of their trials and triumphs are accompanied by the songs that influenced a generation, including “Sherry,” “Big Girls Don’t Cry,” “Walk Like a Man,” “Dawn,” “Rag Doll,” “Bye Bye Baby,” “Who Loves You,” and many more.

Adam Ross: You can check out Adam’s Jersey Boys review on The Good The Bad The Ugly Film Show Ep #86

Greg King: You can check out Greg’s Jersey Boys review on www.filmreviews.net.au

Nick Gardener: You can check out Nick’s Jersey Boys review on The Good The Bad The Ugly Film Show Ep #86

You could be forgiven for thinking ‘Clint Eastwood is directing what’ when it was first announced that he would be the director that would bring the award winning stage musical Jersey Boys to the big screen. However dig a little deeper into Eastwood’s career and you’ll see that his is perhaps, outside of Baz Luhrmann, the perfect choice for being at the helm of Jersey Boys.

See while many film lovers like to see Eastwood as the gritty director who brought Gran Torino to the screen but dig a little deeper into Eastwood’s biography and you’ll discover that he is the owner of a record label and also scored the music for films such as Flags Of Our Father and Million Dollar Baby just to name a few.

Perhaps that is one of the biggest reasons why it feels like Jersey Boys is such a let down… Eastwood could have done better but didn’t. There are parts of Jersey Boys that seem to work well. It is probably one of the first films since Moulin Rouge to really bring the whole musical theatre film into the cinema with it. Some of the concert scenes and of course the closing montage look they could have been lifted straight from a Broadway production but there are other sides of this film that become a total letdown.

Anyone who knows the Frankie Valli (John Lloyd Young) story will know that it can’t be told without stories of his links to Mafia kings like Gyp DeCarlo (Christopher Walken) and the fact that he and Tommy DeVito (Vincent Piazza) were convicted criminals before their first number one hits. It’s here where Jersey Boys feels like it lets down its audience. The film needs the nit and grit of a director like a Martin Scorcesce to delve into the murky world of the Mafia, but here it almost seems like Eastwood is scared to sully the Four Seasons’ reputation by going into the muck. The troubled home life of Valli himself is just skirted on so lightly that it feels like you are watching a tele-movie while most of the Mafia related characters becoming walking clichés, despite the efforts of Christopher Walken to try and pull out a good performance.

It’s these parts of Jersey Boys that makes it hard to watch. With all the darker sides of the story missing it feels like you are watching a glossy film with some segments of power pop infused to it, which doesn’t do justice to the story of Frankie Valli and The Four Seasons at all. And to be honest even the scenes of the group on stage seem so stilted you could be confused for believing that Eastwood had simply inserted some shots in from the actual Broadway musical. At some point Eastwood needed to make a call on whether he wanted this to be a music biopic with the power of The Runaways, become a full blown musical like Les Miserables or make it so light and fluffy it should have been a straight-to-DVD flick.

The weakened script and directing also means that the cast’s performances are sub-par. Christopher Walken is completely wasted as he places a clichéd version of Mafia boss Gyp DeCarlo. The biggest cast member to suffer from the weaknesses of Jersey Boys though is John Lloyd Young. Playing Frankie Valli on the big screen should have been the role that had this young actor being talked about as an Oscar nominee or even just been the film that put him on the map, however none of that will happen here because his performance is so hamstrung that it won’t even garnish a second glance from most Hollywood producers. The only cast member that can hold his head high here is Vincent Piazza who plays tough guy Tommy DeVito. Somehow he manages to brush aside the fluff and somehow put together a fairly decent acting performance.

It almost feels like a crime bashing a Clint Eastwood film. The man is certainly a legend and has shown over the years that he is capable of holding his own with the directional heavyweights, but here Eastwood is dangerously out of his depth. He never truly captures the darker side to the Frankie Valli story and as a result both the film and its audience are left wanting more.