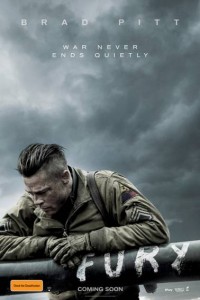 Summary: April, 1945. A battle-hardened army sergeant named Wardaddy commands a Sherman tank and her five-man crew on a deadly mission behind enemy lines.

Greg King: You can check out Greg’s Fury review on www.filmreviews.net.au

There have been countless films over the years that have taken audiences deep into the horrors and nastiness of war. Of course there are the perennial favourites like Apocalypse Now and Saving Private Ryan which will always be trotted out when these kinds of films have been talked about. There are also Australian classics like Breaker Morant and Gallipoli which also take a look at the darker side of history’s battles.

Now director/writer David Ayer has decided to enter that fray with the much publicised Fury. Now the thought of Ayer at the helm of a war film is almost enough to make you salivate. His shaky cam style normally has the effect on you as an audience member that makes you feel like you are right there and part of the action. The thought of that happening in a war is like porn to those that label themselves a ‘war film fan.’ Then Ayer kind of shocked everyone by announcing that the cast of Fury would consists of Brad Pitt, Percy Jackson himself Logan Lerman and the man who is trying very hard to make himself Hollywood’s biggest nutbag Shia LaBeouf. But to Ayer’s credit, he damn well nails it.

With the Allied Forces copping a pounding as they journey further into enemy territory it’s not surprising that one of Wardaddy’s crew dies in action, but what he doesn’t expect is that the replacement crew member that he is sent is the very green Norman Ellison (Logan Lerman), a man who has not only seen no battle so far but was chosen to be in the Army for the fact that he could type at sixty words a minute rather than his abilities in killing Nazi soldiers.

With all the fears that I had when I first walked into the cinema to see Fury aside, Ayer really needs a big pat on the back for congratulations. Fury is not only well acted by a cast that many feared were not up to the task but also looks remarkably good. The fight scenes and even the CGI look really, really natural which is not bad when you consider that this film was put together with a budget of only $68 million. That’s right Ayer has managed to put together an epic war movie for less than what most studios would spend on a comedy these days.

Fury’s strong point is that it is engaging and suspenseful. Ayer quickly educates his audience on the fact that he can deliver a scene with two German woman having lunch with the tank crew and make it just as suspenseful as any tank battle that also takes place during the film. He also shows very early on that this is a film that is going to truly show the horrors of war, and that means some blood splatter. Those expecting Brad Pitt to be playing a pretty boy are quickly shocked out of their seats by the opening scene in which Pitt leaps of a tank and kills a Nazi soldier by driving a knife right through his eye.

Ayer drags his audience deep not only into the inner workings of a tank but also into the inner minds of a tank crew while bringing a constant feel of suspense to the film. Even sitting up in the cinema with your popcorn and drink you could feel the tenseness coming from the screen as you are never really sure what lays around each corner that the tank slowly takes. But Ayer’s talents as a director are really on show with the finale battle scene and with one of the most gun wrenching scenes you are likely to see in a cinema this year when Wardaddy literally forces Norman to commit his first Nazi kill. A drawn out five minute scene that looks like it would have drained the two actors involved while also having the audience right on the edge of their seat.

But Ayer’s brilliance and the fact that he is willing to break Hollywood rules left, right and centre throughout Fury only leaves you wondering why he would then allow for two extremely limp wristed moments to also sneak through the editing process. While not wanting to spoil the film for anybody that hasn’t seen it there are two weak scenes later in this film that just don’t fit with the tone set up throughout the rest of the movie. One contains perhaps the kindest S.S Soldier of all time and the second has some of those rare Nazi grenades that could explode right next to someone without leaving a single mark on them.

One of the most powerful things about Fury is that Ayer gets the absolute best out of his cast. Long gone are the days where Pitt is selected on just his looks alone. Here he puts on a clinic of character acting, despite seeming to be the only U.S. Solider capable of keeping perfect hair throughout the whole battle campaign.

Pitt is also well supported by his younger cast members. LaBeouf and Lerman easily show that they have perhaps been hiding their true talents from cinema audiences previously in the gigantic blockbusters that they have headlined. LaBeouf shows, like he has with Nymphomaniac, that it is time for him to start making some serious films and no longer be labelled ‘that guy from Transformers’ and it seems almost unfair that he is labelled ‘wacky’ for going to the extremes of pulling teeth for a role when those same people praise Christian Bale for putting his health at risk to lose weight for a film. Lerman also surprises those who only know him as Percy Jackson with a well rounded performance of a soldier who is almost in a constant state of shock.

Fury is one film that really does deliver to film fans with some very vast differences in taste. Ayder does enough with his action scenes to keep the adrenalin junkies happy, but also make this a character piece with some serious dramatic moments that really explore just how damaged men of a war can become. Despite the two weak moments towards the films finale Fury is still one of the better films of 2014.

Other Subculture Entertainment Reviews of ‘Fury′: For our full Fury review please check The Good The Bad The Ugly Film Show Ep #102 . You can also check Dave’s Fury review on The Book The Film The T-Shirt.