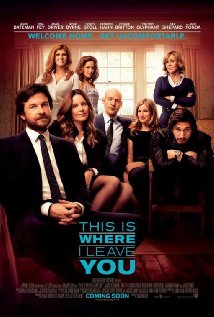 Summary: A Jewish family that isn’t used to observing their faith’s traditions is forced to fulfill their father’s final wish and sit Shivah together and confront their problems.

OUR THIS IS WHERE I LEAVE YOU REVIEWS & RATINGS:

Greg King: You can check out Greg’s This Is Where I Leave You review on www.filmreviews.net.au

Jason Bateman has been a bit of a comedic golden path just recently. It seems every comedy film that he has touched has turned to box office gold with the likes of Due Date and Horrible Bosses leading the way. But you can only wonder whether he has gone skidding of that path badly with This Is Where I Leave You a film that manages to pack together a stellar ensemble cast… but forgets that a film just can’t work if you overcrowd it with so many characters that people can’t keep track of who is who.

Based on the hit novel by Jonathan Tropper (who also pens the screenplay here) This Is Where I Leave You sees one of life’s losers Judd Altman’s (Jason Bateman) life take a turn for a new low, when he comes home from work to find his wife in bed with his egotistical boss, Wade (Dax Shepard).

Then life delivers another blow to Judd when he learns that his father has died. While at the funeral Judd and his siblings learn from their mother, Hillary (Jane Fonda) that their father’s dying wish was that they all turn back to their Jewish roots and return home to their mother for a week. So soon Judd, Wendy (Tina Fey), Phillip (Adam Driver) and Paul (Corey Stoll) are all back under the roof and digging up painful memories from the past that puts them all on edge. Judd is also faced with the new dilemma of does he finally decide to take a risk in his life and turn his back on his cheating wife and take a chance with his friend from High School Penny Moore (Rose Byrne).

On paper This Is Where I Leave You should be a brilliant film. The all star comedic cast should suggest that this film should glitter with comedy gold while the fact that it is based on a hit novel means the film should have a ready made audience. But perhaps the biggest problem here is that the novel has been adapted for the screen by the same man who penned the novel in the first place, a practice that never really works because an author treats his novel like a baby and never wants to cut a thing out of it. As a result This Is Where I Leave You is a film that has just too many characters and is packed absolutely full of subplots.

The result is an over-long film that loses its audience at times with scenes that don’t need to be there and flat spots that end up overshadowing the good comedic moments such as the boys smoking a joint in the synagogue causing mayhem to ensue. Then there are also the comedy moments that do nothing else but make you groan like Wade’s car being overturned by a bunch of steroid abusing idiots.

The other major problem with having so many characters piled into the film is that it means that no actor really ever gets a chance to shine. Jason Bateman just seems to breeze through this film with no effort whatsoever while people such as Rose Byrne and Connie Britton are completely wasted in roles that could have really been filled by nobodies.

Likewise the comedic skills of Jane Fonda and Tina Fey are completely stunted as the weak script rarely gives them a chance to impress or even get a chuckle out of their audience. Even Timothy Olyphant and Dax Shepard are in stunted roles while Adam Driver manages to buck the trend a little by bringing some skills to the table as he portrays the juvenile yet unhappy playboy, Phillip.

This Is Where I Leave You should have been an interesting comedic drama that explored the world of a family in turmoil. With the cast assembled it should have been a beautifully delivered character drama but all because of one weak script it ends up becoming a bit of a mess. The over indulgence of characters means that nobody ever gets a chance to shine while too many opportunities for a good laugh fall by the wayside. Sadly This Is Where I Leave You will be jotted down as one of the disappointments of 2014.