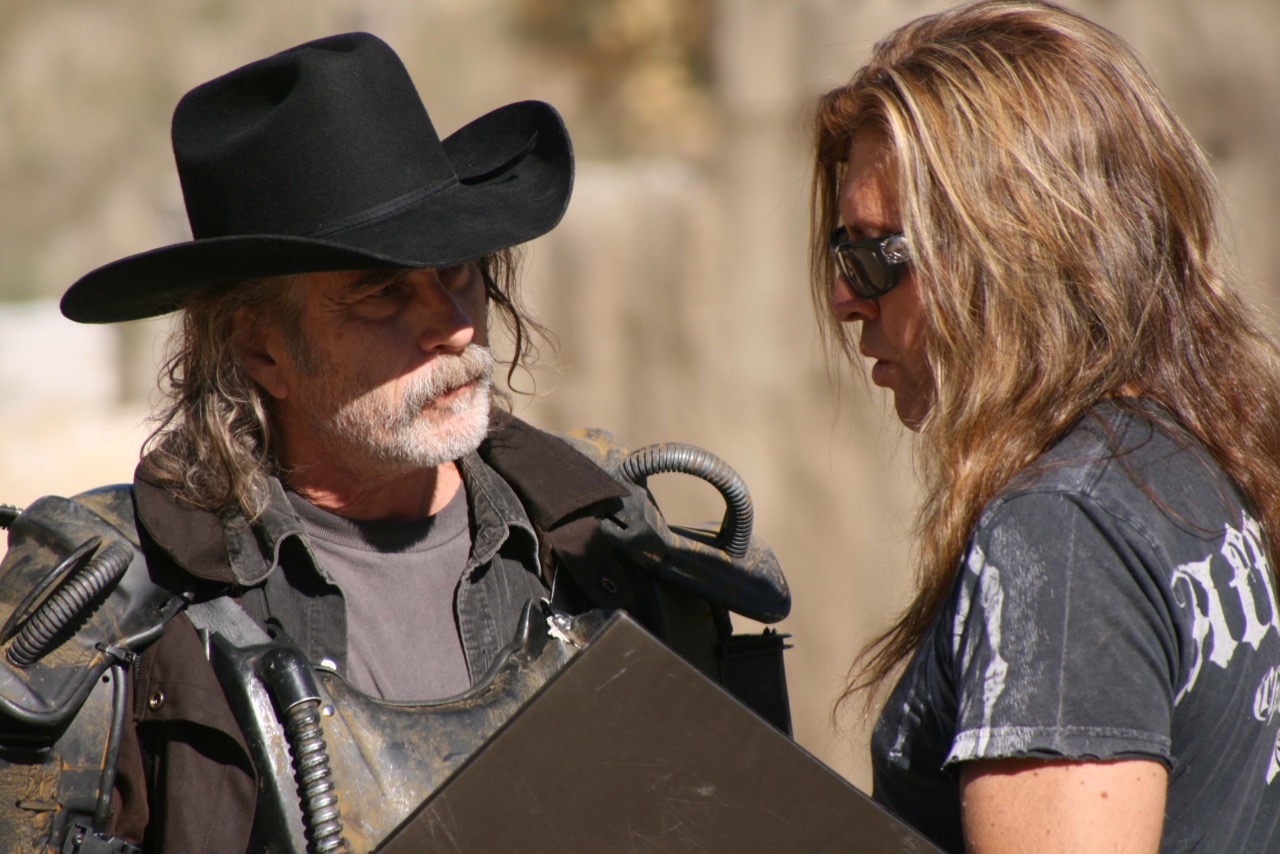 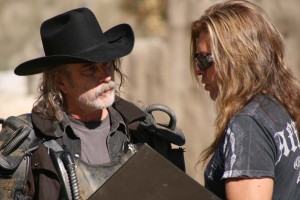 Neil Johnson is one of the hardest working directors going around so we decided to have a chat to him about his new projects Rogue Warrior: Robot Fighter, Doomsday and Starship: Apocalypse. So here it is – our Neil Johnson interview

I don’t have a day job.  Whether I eat or not depends on whether I make a film that people want to buy copies of.  There is a strange attitude in the world at the moment that artistic media should be free.  Once… you paid a ticket and saw a movie, or bought a VHS or DVD.  Now everyone thinks they have the right to download something for free, even though the major studio may have spent $100 million creating that product.  It affects the lower end of the industry even more than the upper tier.  If I walked into a store and walked out with a Blu Ray under my arm, I would be arrested. If a person walks into my virtual home and steals my movie, is that supposed to be OK?  For me to be able to eat and pay rent, I have been forced to increase my output.  I work day and night without rest.  And then to have some moron download the film for free, share it with his friends and then to attempt to review the film comparing it to something that cost $100 million is disheartening.  The $5 million films have almost vanished.  The $1 million films have vanished.  There is only big and small.  The market is changing and I have been forced to change along side it.  My film output MUST be 3-4 films a year, just so I can pay my rent.  It is hard to create something of quality under that pressure, but I sure do try!

Science fiction is always about hope.  It gives me an exciting feeling when I think of flying spaceships, going to new worlds and having adventures.   We are trapped on this planet.  If a giant asteroid were to come, we’d be gone in an instant…. All would be lost… art, culture, consciousness.  For all we know, we could be the only conscious entity in this galaxy.  We owe it to our own existence to get off-world.  Religion is such a pitiful thing.  It leaves us locked on a planet living a lie.  Science Fiction is our future, because it is the impetus that propels us forward.  I was always into Sci-Fi since the age of 2.   The Neil Armstrong on the moon thing warped my young mind.  I was into films like 2001, Star Wars, Quiet Earth, Silent Running, Planet of the Apes.  I so wanted to be an astronaut going on adventures.

It is popular because it keeps evolving.  Science Fiction isn’t just Flash Gordon, or Star Trek, or BSG, or Interstellar.  It is a notion that anything is possible.  It is pure speculation fuelled with imagination.  Whatever your personal flavor, Science Fiction caters for you.  There isn’t one person who doesn’t like at least one Science Fiction film, is there????

I was making films at 16, as soon as my balls dropped.  Prior to that I was writing stories and building full-sized spaceships, time machines and space weapons.  I went to film school and kind of rebelled and did what I thought was right.  I worked in television making commercials and documentaries, and short films on the side.  By the mid 90’s I was running a production house making hundreds of thousands a year.  I gave it all up to make films.  Some say it was my downfall, but I have never been happier.

Yes, it is a wonderful cast!  Doomsday is a time-travel film set between now and 400 years in the future.  It tells the story of a man, Achillies, who is thrust back in time, infected with a terrible disease.  He is pursued by a hybrid human cyborg, who destroys the cities of York and London in an effort to destroy his target.   People are already complaining that it is not as big budget as my other films, but others are saying how refreshing a film it is compared to everything else.   I know people like to watch it more than once to see what is really going on. It came out of a low point in my life.  My best friend died, as well as a few other terrible things happening.  I was stranded in the UK for a few months, so I decided to make a film from a script that had been kicking around.  Darren Jacobs, who was starring in another film, Starship:Rising and the sequel Starship: Apocalypse, helped me by finding some other amazing British actors, like himself.  The film was shot with relative ease across England.  One of my smaller budgets, but it represents a great freedom in being able to decide to do a film, and not needing anyone to green-light anything.  In contrast, doing my recent 2 Starship films was a more painful birthing process.   The films cost a bit, and myself, being the guy who did the world’s first digital film, wanted to do a film almost entirely on green screen, and have it finished in 4K resolution.  These are massively epic stories, and a few have commented since that maybe these films are too epic for such a modest budget.  The point is, I always try and improve my films.  I know the films that are currently in post production, Rogue Warrior: Robot Fighter and At The Edge of Time are both miles above Starship and Doomsday in so many ways.

Yes, changing the name is really not smart.  I liked Chrononaut.  It was unusual… but in the average movie-goer world, who wants to watch a film with a name like that… so I was informed…  So I was urged to change the name to Death Machine, but the distributer response was lack-luster, so some of the territories we sold to called the film Doomsday.  Kind of a mess really, but I take it all with a smile.  If I ever do a director’s cut then the film will be called Chrononaut.

Awards like that kind of hit you when you aren’t expecting it.  You work so hard and you forget so much of what is going on around you… suddenly people start to have respect for your work.  I am not making films for others, it is for myself, so it makes me happy that people give something an award without even trying.  They asked to screen the film and suddenly they handed me an award.  It was a great thrill.  Starship: Rising, my previous film showed at the Action On Film festival run by Del Weston.  We won 4 ½ awards there as well, which was a real surprise.  I was just happy to be getting a screening.

I haven’t really pushed the teaser too much.  When the proper trailer hits, I expect a lot of chatter to start.  I always get nervous about anything released but to be honest, I don’t have an interest to read reviews.  They are almost universally negative and I have no interest to read these comments.

I actually shot both films back to back.  I always wanted it to be a 3-hour epic movie.  People were a little confused by film 1, but after they see film 2, they finally get it all.  Eventually I want to package both films as 1 big story with some extra scenes (already shot) that will make the whole story more uniform.

Not exactly.  But Rogue Warrior: Robot Fighter takes place in the same universe.  There is a character from the Starship series, Roartak, who is mentioned in the film.  If I did a third film, for sure it would be set 10 years later.

It was really a lot of fun.  I teamed up with Tracey Birdsall and we shared a love of robots.  I am all into the ideas of what happens when Artificial Intelligence gets so big that it takes over.  20% is set on Earth, the rest is on other planets.  I was so happy to be out on location shooting rather than being cooped up in the studio.  I know that my D.P., Kyle Wright was happy about this.  I really hope he gets some cinematography awards for this.  We shot mostly in California but also a bit in Arizona and Australia.  The film has a whole new feel from my previous films.  It is much more of a practical film.  It has kind of come out like Star Wars: The Force Awakens blended with Mad Max: Fury Road.  Kind of strange considering when we shot the film, nether of these entities existed in the public eye.  I just did what I wanted to do.  It think there is sometimes a creative consciousness that permeates.  Many of us film-makers wanted to get back to being practical rather that relying on CG.

Hell yeah, there is pressure on me.  Even day a giant screw up my ass turns ever so slowly.  But all I want to do is create a work of art.  Right now the film is at over 2 hours, and I need to tighten it.  The cult following has to do with Tracey Birdsall and her wacky-sexy costumes, and also the fact that she can actually act.  There is a real sense of character in this.  We didn’t plan this.  We just leapt into what we wanted to do.  There is a great reason why Tracey’s character wears what she does, but you will have to see the film for the answers.

When you look at a woman like Tracey you think that she would be a real princess, but in fact she is tougher than most of the male actors out there.  She likes to fight and roll and run and leap, and kill robots.  One day she was covered in almost 100 bruises from all the fighting action.  I know she works out hard with one of the big trainers in Malibu, Diamond Russ, and he takes great pride in pushing her to looked as ripped as she can.  There is a scene in the film where she is sorta naked, and you can see how lean and ripped she really is.

Then, we had Daz Crawford, who is known for Blade 2, a James Bond villain, etc, and he is also ripped, and he can act as well… which is wonderful.  He is an amazing guy from the UK, who I would love to work with again.  He inspires me to go to the gym more often.  We also had Stephen Manly who played young Spock in Star Trek 3.  It was sad that Leonard Nimoy passed while we were shooting. Stehphen Manley carries a lot of heart and soul in his performance.  All the actors we chose, Tim McGrath(Stuck), Ashley Park (Miss Korea 2015), Erin Bethia (Fireproof), Livvy Stubenrauch (Disney’s Frozen) were all chosen because they could act with great character arcs and some real truth.  Originally I wanted Rogue Warrior to have a kind of Red Dwarf comedy feel, but it got a little too serious along the way.

Don’t be too hard on me.  I am just a hard–working guy who tries to make great films in a depressed market.  Also check out Humanity’s End, and old film of mine that I love.  Starship: Apocalypse hits the shelves in the UK in late September and in the US in December.  Rogue Warrior VERY early 2016.