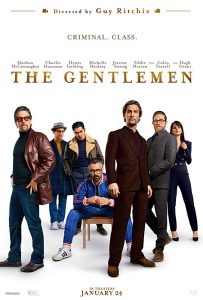 Summary: A British drug lord tries to sell off his highly profitable empire to a dynasty of Oklahoma billionaires. 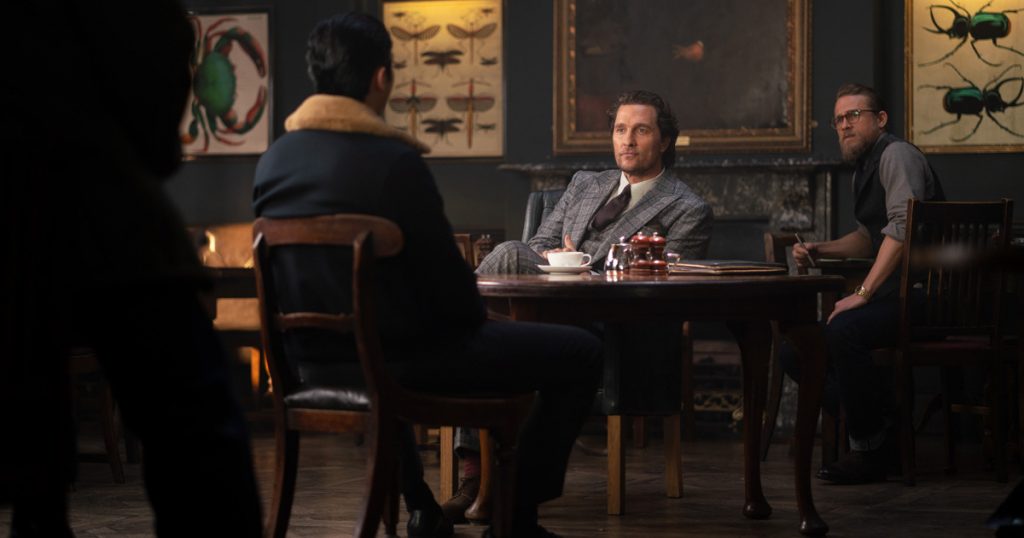 OUR THE GENTLEMEN REVIEWS & RATINGS:

Nobody quite does gangster film the way Guy Ritchie does. Ritchie basically made the genre his own after re-inventing it with modern day classics like Lock, Stock And Two Smoking Barrells and Snatch. And while cinema goers have enjoyed Ritichie’s take on Sherlock Holmes and The Man From U.N.C.L.E. nothing he has done in recent years has ever captured that true magic of his early films… that was until now. Yes The Gentlemen sees Ritchie return to the gangster genre but also sees him return to form with his creativity and stunning scriptwriting.

The film centres around Mickey Pearson (Matthew McConaughey – Dallas Buyers Club) a gangster who has built a budding marijuana business across England. However when Mickey is shot in a bar a private investigator turned wannaba screenwriter named Fletcher (Hugh Grant – Love Actually) is employed by a newspaper to investigate the case. Not happy with his fee though Fletcher decides to cash-in and try to blackmail Mickey’s right-hand man Ray (Charlie Hunnam – Pacific Rim) with a meandering tale that also involves other crime figures like Dry Eye (Henry Golding – Last Christmas) and Coach (Colin Farrell – The Lobster).

The Gentlemen screams creativity from the get go. Ritchie doesn’t make the film an easy watch for the audience. The story doesn’t play in order instead the audience is fed bits and pieces of information from a myriad of sources and at times it is up to them to work out what his truth or lie. Of course Ritchie also throws in the odd red herring to try and put you off the scent and the result is a heightened sense of suspense as you are never really sure what is true, right down to character’s deaths, until it is spelled out for you in actual black and white.

In true Ritchie style the way the plot is presented is also a stroke of genius. Having Fletcher recount the story for Ray not only gives the filmmaker a way to show the different variations of the truth in a creative way but also allows Grant and Hunnam to have an amazing screen presence that both actors seem to embrace with two hands. Grant is truly sensational and despite a long career to date this is easily his best ever role. While the film is not a comedy Grant uses his comedic timing to further enhance the character of Fletcher and make him someone truly memorable. Nearly all of the scenes that the two actors share together feel like an intense theatre production and there is no sign of weak acting anywhere to be seen.

Of course with the all the theatrics and creativity that Ritchie shows with this film he could probably be excused if it were being used to cover up a weak storyline but that certainly isn’t the case here. The story is an absolute gem, made up of unique characters who seem out to only aid their business dealings while not really caring what they do or who they have to crush to get what they want. And while there seems to be a never-ending amount of characters being included in the story you never seem to lose track of who is who and more importantly who works with who.

Anyone planning on going to see The Gentlemen should be warned though that while we have entered into a time of political correctness Ritchie seems to ignore that with this film. The language is perhaps the most extreme we have seen in cinema for awhile (but it does fit with the storyline) and of course this wouldn’t be a Ritchie gangster film if there wasn’t a couple of very violent on-screen deaths as well.

We mentioned earlier the brilliant performances of Grant and Hunnam but really there are a number of other actors who deserve credit for their work as well. Once again Matthew McConaughey shows why he is one of the best character actors going around at the moment while the big surprise here might be the performance of Henry Golding who breaks the shackles of his normal nice-guy persona by playing the very untrustworthy Dry Eye. Then of course there is Hollywood’s forgotten man Colin Farrell who seems to be having a ball playing the slimy Coach.

As far as gangster films go there are none better than The Gentlemen. This is a true cinema tour de force that delivers a headbutt to the face of its audience. It leaves in shock, it leaves you in awe but beyond all else this is a film that you will want to watch over and over again. Guy Ritchie is a true magician of a filmmaker and with The Gentlemen he delivers some good old-fashioned creative magic.

Other Subculture Entertainment The Gentlemen Reviews:

Our The Gentlemen review that appeared in ‘The Phuket News’ can be right using this link – https://www.thephuketnews.com/the-gentleman-are-perfect-gangsters-74702.php