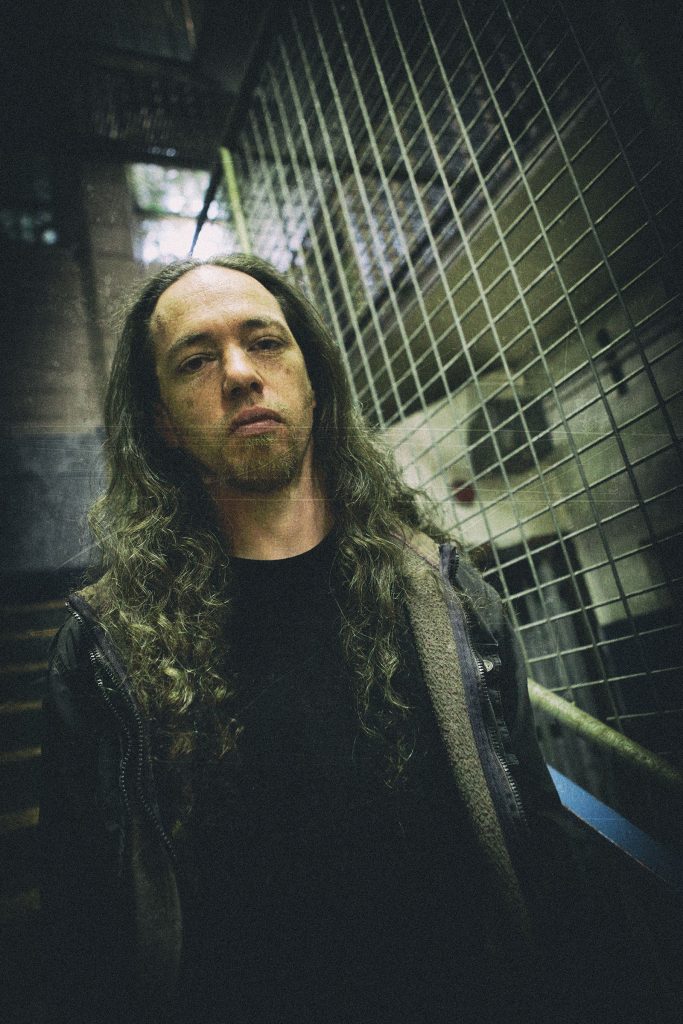 One artist that couldn’t be more excited about having a track on the Murder In The Rue Morgue Volume 1 compilation is solo musician Grant Burns. Burns has made a name for himself over the years performing with bands such as Mason, Vulgod, Vespers Descent, Darkenium and Watercolour Ghosts and he released his solo album Chaos In Design with Rue Morgue Records last year.

“My journey with Rue Morgue all started when I was recording my solo album,” says Burns when I get a chance to chat to him about the new compilation. “I was recording it and I just wanted to do something with it. It was around about the time that Rue Morgue Records was starting and I’d had a few offers but I was like ‘nah that’s not for me’ and I kept going.”

“Then I contacted John,” he says continuing. “I contacted him mainly for his camera work and I said ‘would you mind doing some shots for this album that I have been working on’ and he said ‘yeah no worries.’ So I gave him all the stuff just so he get an idea of where I was headed and then he listened to it and he said ‘we’ve got to meet as soon as we can because I think we can do something.’ For me that was a really nice feeling when you have been working so hard on an album and I had no idea what to do with that. That was the start but then the great part was putting it all together, for me it wasn’t just about releasing a bunch of tracks that I had been working on so from there we just worked together to see how we would put it out and promote it and make it something tangible that we could put out there. Looking back to what it was like after it was released it was just basically…WOW!”

“So what I did was I gave him the track as a thank you and then there would be something new on the album,” he explains. “Also because it is a one off track it gave me the opportunity to experiment a little bit so that was kind of exciting in itself because I had a few tracks and I wasn’t sure which one to pick. But I had all these different ideas where I could use different guitars and such because it is a one off and I could do whatever I wanted. So in the end I convinced Jarrod Moseley (from death metal outfit Destructor) to play drums on it, so this particular track is a lot more drum orientated which made it really fun, and because it was just a one-off we didn’t have to rehearse for hours or anything like that. It was just more like ‘come down to the studio and we will just go for it.’”

With Burns being so happy about what he was able to do for Murders In The Rue Morgue I asked him just how important compilations like these are to have out there. “This was hugely important for me,” he says with happiness in his voice. “I think the whole Rue Morgue thing and what it has done for me is quite a lot so in a sense it has helped create my main music entity and has helped me to reach out to entire new audience. So for me to be able to be on this compilation at all is just another way for me to reach other audience members that weren’t potentially there before. I think there is also a bit of a community feel there as well, I mean you are a part of a family with the Rue Morgue compilation. You are not just thrown in there it is something that Rue Morgue have put together and we are all in it together and I don’t think that anyone else who is on that compilation wouldn’t lend a hand whenever something came up. So yeah, it is a bit of a community as well.”

So for all music lovers out there do the right thing and get behind the community and grab yourself a copy of Murders In The Rue Morgue Volume 1.