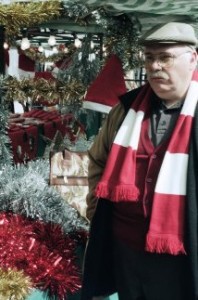 Summary: Based on actual events London Road looks at the reactions of local residents in a quiet street named London Road in Ipswich whose peaceful neighborhood was at first disturbed by the arrival of prostitutes deciding to sell their trade in their street and then the craziness and fear that resulted after a serial killer murdered five of the woman.

With a script that has dialogue that comes straight from the interviews conducted with the residents over a three year period London Road explores how everyday people such as a taxi driver named Mark (Tom Hardy) and local residents like Dodge (Paul Thornley) and Julie (Olivia Colman) cope with the resulting media and Police circus.

London Road is not an easy film to talk about because to be brutally honest this is a film that is going to divide cinemagoers like no other film this year. On the one hand London Road is a breath of fresh air in the cinema, a type of film that we haven’t really seen before. But then on the other hand all the things that make it so different are also the things that are going to make this film appeal to a very small audience indeed.

For those not in the know London Road is based on the popular National Theatre production that had critics and audiences raving. Now the name National Theatre shouldn’t be foreign to cinema lovers any more. Over the past few years the theatre company have reached out into cinemas with countless productions that have featured some of cinemas’ biggest names – Danny Boyle directed Jonny Lee Miller and Benedict Cumberbatch in Frankenstein, Kenneth Branagh directed Macbeth and Gillian Anderson starred in A Streetcar Named Desire. With these productions filling cinemas worldwide it is very little wonder that the National Theatre have decided to look at other ways to bring their work to the cinema and the result is London Road, a film that is produced by them, stars most of their actors and is directed by Rufus Norris, a Tony nominated theatre director who has had a few films reach the cinemas over the years as well.

Now this is where things get tricky for London Road. The idea of creating a modern day musical about a spate of prostitute murders is so different to anything we have ever seen before that it is actually something that is worth watching. At times the film does really draw you in but the alternative style of musical theatre that makes up the score never really allows its audience to comfortably forget the fact they are watching a musical. The key to a good musical films – things like Sweeney Todd, Moulin Rouge or Rock Of Ages – is to make the audience forget that most of the dialogue is being delivered in song, but here the fact that the songs often contain the one piece of dialogue used over and over again, and the fact that in trying to make this film feel natural they haven’t selected the best singers in the world means that for the entire film you are conscious of the fact that you are watching a musical.

On the plus side though London Road is different enough that it does draw you in. You genuinely feel sorry for the innocent members of the public that through no fault of their own got swept up in this Ipswich Ripper case and at times the directional hand of Rufus Norris does creatively show things such as how scared young girls were scared to walk down the street or were judging every man they meet. Moments like a radio station capitalizing on the murders by running a promotion giving away personal alarms for women are memorable but the most powerful part of this film is when you start to hear the stories of some of the prostitutes who worked in London Road at the time and the effect that the murders had on them.

Aside from those moments the other thing that works for London Road is the fact that there will be one or two characters that each audience member will warm to and you find yourselves really wanting to go on the journey with them. Dodge played by Paul Thornley is one such character and he is one of the more interesting characters. Unfairly you sometimes wonder if he is the killer because of his appearance and seemingly unhealthy obsession with the prostitutes early on the film, and as a result characters like this become a lot more interesting then people like Mark who you know have only been added to the film to get a big name actor like Tom Hardy into the film. While these appearances are a little unnecessary we do learn rather quickly that it’s a good thing that Nolan didn’t want Hardy to portray a musical version of Bain.

London Road is a film that is only going to be lapped up by a very small clique of audience members. Its musical stylings are a little too alternative for you traditional musical lovers while the film is too musical for lovers of alternative cinema. It’s quite a pickle the film finds itself in, but the core problem is that the filmmakers didn’t seem to realise that audiences are a lot more open to alternative theatre than alternative film. Still London Road is worth a look if you like your cinema on the quirky side and it certainly shouldn’t be described as a bad film. 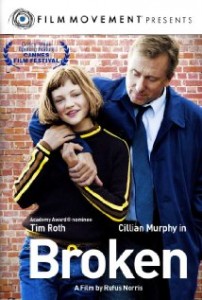 Summary: Directed by multi-award winning theatre director, Rufus Norris, and starring Tim Roth and Cillian Murphy, BROKEN is a captivating and heartbreaking exploration of love in all its many forms, set in a seemingly normal street of contemporary Britain. Introducing young Eloise Laurence in an extraordinary debut performance, Broken features an unforgettable soundtrack by Blur’s Damon Albarn and is based on the acclaimed British novel by Daniel Clay, inspired by Harper Lee’s To Kill a Mockingbird.

Please check Dave’s review of ‘Broken’ that is available on The Helium Entertainment Channel.

Please check Adam’s review of ‘Broken’ that is available on www.thecrat.com.

Please check Greg’s review of ‘Broken’ that is available on www.filmreviews.net.au

Please check Nick’s review of ‘Broken’ that is available on The Good The Bad The Ugly Film Show.

Other Subculture Media Reviews of ‘Broken′: Check Episode #32 of our The Good The Bad The Ugly Podcast for a more in-depth review of ‘Broken’.