The boys would also love to wish all of their loyal listeners are very Merry Christmas and safe travels throughout the holiday season. 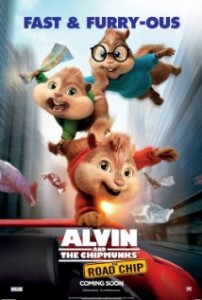 Summary: Alvin (voiced by Justin Long), Simon (Matthew Gray Gubler) and Theodore (Jesse McCartney) return and this time they have a huge problem. Not only has their ‘father’ Dave (Jason Lee) put a stop to them performing live, so they can be normal kids for awhile, but his relationship with Samantha (Kimberly Williams-Paisley) is going so well it looks like they are about to get engaged.

Now the Chipmunks are happy for Dave but are concerned that if he marries Samantha that wil mean that they that are now ‘brothers’ with a boy that seems to enjoy torturing them, Miles (Josh Green). When they learn that he isn’t too happy about being related to them either the four decide to embark on a road trip to Miami to prevent the engagement from happening.

OUR ALVIN AND THE CHIPMUNKS:ROAD CHIP REVIEWS & RATINGS:

Well I guess it had to happen to one film and for most territories around the world it was Alvin And The Chipmunks: Road Chip that went up against the might of Star Wars: The Force Awakens. When you actually think about it it’s not such a bad strategic move considering that most little kids who will want to see Alvin and co will have very little interest in going to see a film about intergalactic warfare. That leaves the big questions being… is this the kind of movie that will entertain or put my children to sleep?

Anyone who has sat through all four Alvin & The Chipmunks movies will tell you that this has been a franchise that has been all over the shop when it comes to quality. The first film surprisingly had meaning taking a huge swipe at the music industry and the way it treats young artists, but from then (like most of the franchises) these days it seems to have had more lows than highs. That is where you might be pleasantly surprised by Alvin And The Chipmunks: Road Chip.

While the cast in front of the camera (and behind the microphone in some cases) haven’t changed this time around, the crew behind the scenes has. Known comedy director Walk Becker (who has previously brought us Van Wilder and Wild Hogs) steps up to the plate and is probably the reason behind a lot of the slapstick that surfaces this time around. Also new to the creative table are screenwriters who can boast films like Mrs Doubtfire and Due Date on their Resumes.

The new creative team behind the film takes this movie in a completely different direction to the last two films. Here the franchise once again finds its heart as the film explores the delicate subject of siblings being brought together as parents remarry etc. Surprisingly the film actually does that quite well, and while Miles is originally set-up as a brat you are supposed to hate the screenwriters do actually take his character on a journey that allows the audience to see how he ended up the way he did. It’s surprisingly moving.

Of course as you would expect from a movie aimed at the younger demographic there is also a lot of scenes that adults are going to find ‘silly.’ The battle scenes with Agent Suggs (Tony Hale) are over the top and too slapsticky for adults to really enjoy but you can guarantee younger kids will be in hysterics over them. Likewise the Red Foo scenes which are nauseating for anybody that has taste in music, but luckily the latter music scenes depicting the Chipmunks doing everything from playing in a redneck bar to rocking out with a brass band in New Orleans are a lot better.

As is normally the case with this franchise the actors are really overshadowed by the CGI chipmunks. Jason Lee seems to be cruise control, as is Kimberly Williams-Paisley. Tony Hale overacts constantly throughout the film, something that it is obvious he was asked to do by the creative team and for the most past it works. The biggest surprise though is the acting performance of Josh Green. The young inexperienced actor really shows that he may be an actor to watch in the future and he masterfully takes his character on a journey throughout this film. He manages to switch from comedy to moving emotionally scenes at a whim and he is one of the few actors who isn’t over-shadowed by his furry, cute co-stars.

Alvin And The Chipmunks: Road Chip has enough crazy scenes and music sequences to keep younger kids happy while the older generations will warm to the more heartfelt moments throughout the film. Yes this film isn’t the car crash many expected it would be.