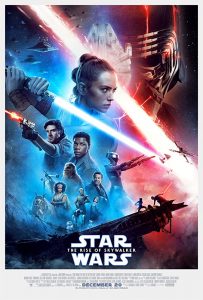 Summary: The surviving members of the resistance face the First Order once again, and the legendary conflict between the Jedi and the Sith reaches its peak bringing the Skywalker saga to its end.

It has taken forty-two years to get there, but finally the Skywalker saga is drawing to a close. No other cinematic franchise has ever reached the massive heights that Star Wars has and to say that this is a beloved series is under-selling it in a very big way. It is for that reason that J.J. Abrams has had one of the most difficult jobs that any filmmaker could ever dream of, it is up to him to close this much loved chapter in the Star Wars story in a way that will please a legion of fans world-wide.

Leading into Star Wars: The Rise of Skywalker that story had been thrown into turmoil both on and off the screen. On screen we saw the death of Luke Skywalker (Mark Hamill) and the apparent return of Emperor Palpatine (Ian McDiarmid). Off screen all Star Wars fans were rocked with the tragic death of actress Carrie Fisher which they knew would impact the storyline of the final film.

Abrams doesn’t leave fans waiting with The Rise Of Skywalker very quickly getting down to business. Kylo Ren (Adam Driver) is on the hunt for Palpatine, while Finn (John Boyega), Poe (Oscar Isaac) and Chewbacca (Joonas Suotamo) search for an artefact that will allow Rey (Daisy Ridley) to face Palpatine, while they try to stop the massive First Order forces who are ready to once again take over the universe.

The plot maybe simple but certainly does not fail to entertain. Early on the film feels episodic simply moving from one story to another in a specific order but once it breaks those shackles the film mirrors the energy and entertainment that we all come to love from the original Star Wars films. But while the film does entertain it also does have its flaws. With the plot having so much going on there are times when it feels like it doesn’t spend enough time raising the levels of suspense, something that is very surprising considering that some of the lives in danger here are some of the most loved characters in cinematic history.

Still for the most of the part of the film Abrams keeps things simple but effective. Once it established that all characters could meet their end this time around that goes some way to keeping the audience on their toes while the final epic battle is something that true Star Wars fans have dreamt of for a long time. Unlike a lot of franchises this chapter does close with a finale that will leave fans happy and is should be noted that Disney does leave the door slightly ajar if they ever wish to continue the saga.

What makes this instalment so enjoyable though is the acting, and that is not something we have been able to say about every Star Wars instalment. Adam Driver shows in this film why he is one of the best actors in Hollywood at the moment. It is obvious that he doesn’t move into a lower acting gear because he is in an epic blockbuster here, instead he puts as much drama and emotion into his Marriage Story and Paterson… the former role which is talked about possibly earning him an Oscar nomination.

Driver is well matched on screen by Daisy Ridley whose acting prowess has continued to grow throughout this trilogy. Johy Boyega  and Oscar Isaac also deliver their goods but at the end of the day this film is literally Driver versus Ridley and that shows right up to the last amazing and memorable crescendo.

Other Subculture Entertainment Star Wars: The Rise Of Skywalker Reviews:

Our Stars Wars: The Rise Of Skywalker review that appeared in ‘The Phuket News’ can be read at this link – https://www.thephuketnews.com/rise-of-the-skywalker-will-give-you-palpatations-74177.php