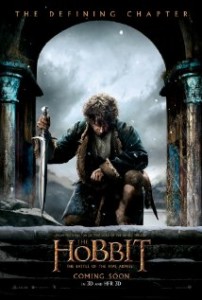 Summary: Peter Jackson’s last foray into the world of Middle Earth begins with Lake-town under severe attack after Smaug (voiced by Benedict Cumberbatch) has left the Mountain and is looking for revenge. Bilbo (Martin Freeman) and co can do very little but watch as the attack occurs.

Meanwhile while others group together to rescue Gandalf (Ian McKellan), Bilbo is left stunned as the Mountain has a strange affect on Thorin (Richard Armitage) who seems to be going crazy as he insanely looks for the Heart Of The Mountain. His group grow increasingly worried as various armies march on the mountain to claim it and Thorin continues his search without honouring his debts or even bothering to help those who are trying to defend the Mountain.

OUR THE HOBBIT: THE BATTLE OF FIVE ARMIES REVIEWS & RATINGS:

Adam Ross: You can check out Adam’s The Hobbit: The Battle Of Five Armies review on The Good The Bad The Ugly Film Show Ep #111.

Greg King: You can check out Greg’s The Hobbit: The Battle Of Five Armies review on www.filmreviews.net.au

Nick Gardener: You can check out Nick’s The Hobbit: The Battle Of Five Armies review on The Good The Bad The Ugly Film Show Ep #111.

Peter Jackson’s Middle Earth six-peat is understandably a life-long ambition that he wanted to achieve. Outside of George Lucas and Star Wars it is arguable that no director in the history of cinema has ever shown so much dedication to a series of films. And let’s be honest while The Lord Of The Rings trilogy were a real feat in filmmaking The Hobbit series has rarely reached the same amazing peaks. The first film while serviceable at times seemed more like a documentary on a walking tours of New Zealand than it did as a huge mythical epic, while it was also plagued by the new technology Jackson brought to the film which had some cinema goers feeling like they were watching the film in fast forward.

What gave us hope that Jackson would be back to his best with The Hobbit: The Battle Of Five Armies was its predecessor, The Hobbit: The Desolation Of Smaug. Smaug was what everybody was expecting from this series, Jackson back to being able mix good characterisation with some very creative action, but sadly it seems that film is going to be the high mark of the series because Five Armies seems to be completely hit or miss.

The Hobbit: The Battle Of Five Armies is going to be a film that will be enjoyed if you like epic battles, but if you’re a serious movie buff there will still be things that seriously irk you about the film. The battle itself is lengthy but to be honest the directors of Game Of Thrones seem to have spoilt us so much over the past couple of seasons that even some of the action here seems to be a little disappointing on the big screen.

There are several moments during which the audience will be left completely scratching their heads. For example the scene in which Galadriel (Cate Blanchett), Saruman (Christopher Lee) and Elrond (Hugo Weaving) sweep in to save Gandalf not only contains some shockingly bad special effects that look like they may have been lifted from a 1980s straight-to-video nasty but also leaves you wondering that with the power of Elrond on show for all to see why he doesn’t then and go and help out with the battle?

Then to be honest there are some incredibly amazing moments in the film as well. Some of Legolas (Orlando Bloom) and Thorin’s fight scenes with Orcs on the ice-cap mountain do look extremely good, despite the fact that at times such as Legolas’ rock-jumping sequence the audience is left having to suspend their believability of what it is happening. Then Jackson also creates some very touching moments between characters that tug on the audience’s heart strings in a way that an epic action film like this shouldn’t be able to. The up-and-down nature of The Hobbit series seems to battle itself to no end in this finale of the franchise.

With such a huge ensemble cast gathering together for this final film, it’s understandable that some actors don’t get the screen they deserve. As previously mentioned actors like Hugo Weaving and Cate Blanchett have their skills completely underused while Billy Connolly seems to only turn up for the comedic effect of playing Dain. The big winners out of The Hobbit: The Battle Of Five Armies are Orlando Bloom, who on the back of his performance in Smaug should have done enough to remind Hollywood producers that he is always a pretty decent actor in big blockbusters, Martin Freeman and Richard Armitage. Freeman has become a really easy actor to warm to throughout the series while Armitage who was mainly a television actor before this series of films has really revealed himself to be a seriously good character actor who should have a huge career ahead of him.

It is sad that Jackson’s Middle Earth saga has come to a close, it is even sadder that it has had to happen with such a mediocre film, especially when you take into consideration the lofty heights set by The Lord Of The Rings trilogy. That may well be something that comes to haunt Jackson’s career from here on in as it is just too easy to compare anything he makes now back to a series that really changed the cinema landscape. The best hope that The Battle Of Five Armies has is that it is like Unexpected Journey and begins to grow on you the more times that you watch it.