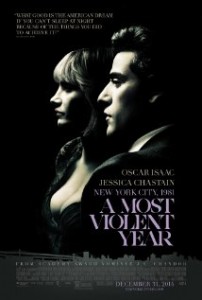 Summary:  In New York City 1981, an ambitious immigrant fights to protect his business and family during the most dangerous year in the city’s history.

OUR A MOST VIOLENT YEAR REVIEWS & RATINGS:

You can read Greg’s full A Most Violent Year review on www.filmreviews.net.au 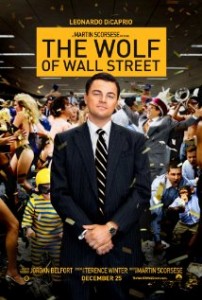 Summary: Jordan Belfort (DiCaprio) is the son of an accountant, hoping to make it big on Wall Street as a stockbroker. Following the crash of 1987 Belfort reinvents himself with the help of Donnie Azoff (Jonah Hill) and close group of unscrupulous friends, starting brokerage firm Stratton Oakmont. Rapidly becoming wealthy beyond his wildest dreams, Belfort develops a hard-partying lifestyle that soon attracts the attention of federal government.

Please check Greg’s The Wolf Of Wall Street review of that is available on www.filmreviews.net.au

First I do have to admit a real bias when I am reviewing The Wolf Of Wall Street – I am an avid Martin Scorsese film and also an avid Leonardo DiCaprio, yes I have been in heaven for the past few years while they are collaborated together on five films. And yes while films such as Shutter Island and The Departed would make my ‘Greatest Films Ever Made’ list, I am not biased enough to admit that these two have made some ordinary films together, especially The Aviator.

So where does The Wolf Of Wall Street fit on the Leonardo DiCaprio/Martin Scorsese scale. Well to be honest it is pretty bloody high up, because this is a good… no make that… great film. But to preface that I should say this film does go above and beyond to get its R18+ rating because Scorsese has pretty much made a film about a world of sleaze.

Under Scorsese’s wonderful direction DiCaprio plays Jordan Belfort, a young man who is introduced into the world of Wall Street finance by the ‘out there’ Mark Hanna (Matthew McCounaughey) who teaches Jordan the things he needs to succeed are cash, drugs and sex… and that you get them anyway you can.

Jordan’s first journey into Wall Street though doesn’t last after the crash of 1987 and soon Hanna disappears out of the picture and Jordan is left to resurrect himself, this time through a backyard operation that pretty much just sells worthless penny deals. But Jordan sees promise in that and soon he, and his new found buddy the loud Donnie Azoff (Jonah Hill), begin their new operation that has the sole aim of making them money.

Once Jordan is once again wealthy he again reaches Wall Street doing illegal deal after illegal deal while his weaknesses are still cash, drugs and sex… this time with his future wife, the beautiful Naomi Lapaglia (Margot Robbie). Everything is going well until a Federal Agent (played by Kyle Chandler) starts sniffing around Jordan and aims to bring him down.

With The Wolf Of Wall Street Scorsese is once again at the top of his game. He is cunning with the way that he tells this story – yes at times he glorifies the sick lifestyle that Jordan lives, but he also dramatically shows the downside of this lifestyle to the point where anybody watching the film would be an idiot to want to get involved in the finance world. At times Jordan appears to be a God, but that image is shattered when Scorsese allows the grime to reach the surface in shocking acts such as seeing Jordan punch his wife in the stomach. Those that criticize The Wolf Of Wall Street and point out that Scorsese is trying to glorify this film are on the wrong track completely because he is trying to do anything but that.

The critics that have pointed out that Scorsese goes back and reuses some of his old Goodfellas style are right, but always the inventor Scorsese also uses comedy to full affect in The Wolf Of Wall Street… perhaps to give his audience a rest from the onslaught, while he is also creative in the way that he allows Jordan to narrate this film, especially in the sense that Jordan seems to be able to pick and choose what he feels the audience will understand. He may be in his seventies but at least Scorsese is still a director willing to try new things.

Once again Scorsese also gets the best out of Leonardo DiCaprio. Just like he did in Django Unchained DiCaprio relishes the fact that he gets to play an unlikable character here and he is well deserved of all the awards he has been nominated for. But this isn’t just the DiCaprio show, oh no Matthew McConaughey steals the show with his brief performance, Kyle Chandler is once again smooth in his role while Jonah Hill provides more than just comedic relief showing that he is a genuine dramatic actor these days. However the person that deserves a big tick for The Wolf Of Wall Street is Australian actress Margot Robbie who shows that she is more than just a pretty face and delivers some intense acting during her sometimes vicious scenes with DiCaprio. Yes she well and truly deserves her ‘star on the rise’ label.

As previously mentioned The Wolf Of Wall Street is not a film that will be enjoyed by all. It is a powerful, and yes at times graphic film. It may be a little long (some of the scenes wouldn’t have suffered if the editor had been a bit more brutal) but this film once again shows why Martin Scorsese is a living legend when it comes to filmmaking.