Summary: When Tony Stark/Iron Man (Robert Downey Jr.) and Dr. Bruce Banner/The Hulk (Mark Ruffalo) accidentally unleash the evil that is Ultron (James Spader) onto the world it is up to themselves, Black Widow (Scarlett Johansson), Thor (Chris Hemsworth), Captain America (Chris Evans) and Hawkeye (Jeremy Renner) to re-group and once again try to save the world.

But as Ultron’s extra-intelligence helps him stay ahead of The Avengers as he prepares to destroy them and then mankind, he is also aided by the mysterious powers of newcomers Scarlet Witch (Elizabeth Olsen) and Quicksilver (Aaron Taylor-Johnson).

Joss Whedon finds himself in an unusual predicament with Avengers: Age Of Ultron. When he took the helm of the franchise with The Avengers he created an action film so perfect that many were labeling the best action film ever made. Now Whedon has the hard task of trying to match that with his latest Avengers installment… only one poor man can relate, poor Christopher Nolan who had to back up the Oscar winning The Dark Knight with The Dark Knight Rises. Adding more problems for Whedon was the fact that the Russo’s further enhanced the franchise with the epically wonderful Captain America: Winter Soldier.

Whedon hits the ground running with Avengers: Age Of Ultron starting the film mid battle which amazingly enough creatively gives each Avenger their own piece of screen time to show exactly what they are capable of. To Whedon’s credit he doesn’t muck around re-introducing the members of the Avengers, no if you haven’t seen the other films in the franchise… tough!!! From there the film is topsy-turvy though. Once again Whedon’s special effects team goes into overdrive with some amazing sequences, although he should probably hold back so many slo-mo shots though as they become tedious after awhile. Surely such a creative director could have thought of some other kinds of shots, especially seeing at times Whedon manages to take his audience right inside the battle with some pretty creative directional moves.

While Whedon does at least create a very creative way to place the Earth in peril and some of the film’s deep points on those who set out to bring peace to this world, the politics of war or those with a God-complex are quite thought provoking, other parts of the films will let down their audience. The mind-bending scenes that come as a result of Scarlet Witch messing with the brains of The Avengers seem to lack the certain something they need to really standout. The attempts of Whedon to make them artsy certainly didn’t work and many audience members will find themselves tuning out during them.

Also missing this time around is a lot of the humor that made the first Avengers movie so memorable. Yes there are the occasional funny moments and lines (thanks largely to Tony Stark) but nothing as good as the Hulk smashing Loki moment from Avengers. Now talking about Loki, that also raises the biggest fault with Avengers: Age Of Ultron. Loki was everything that you want in a bad guy – evil, cheeky and strong but here you’ll quickly find that Ultron is a little bit of a bland villain. Yes he is formidable and he is strong, but instead of making you chuckle his ‘pearls of wisdom’ threaten to make your brain explode as you try to think about. The logic behind Ultron is also strangely like the internet demon that Willow created in Buffy The Vampire Slayer and the giant robot that Spike and Angel tried to build in the strange series… at least Mr. Whedon is borrowing from his own material.

The other thing that is going to peeve off comic book fans as well is the treatment of Quicksilver. Now I know that X-Men is currently owned by a different company but it does seem a little weird that the Quicksilver here in Avengers: Age Of Ultron has a very different back story to the Quicksilver we now know in the X-Men franchise. Sadly, I can’t tell you though why the two different Quicksilvers in the two different franchise is going to mess with the minds of fans even more because sadly that would be giving away a major plot point of this film… all I will say though is it will completely mess with you and have you tearing your hair out.

The one thing though that does prevent Avengers: Age Of Ultron from becoming a really bland comic book movie is that this is a movie that does have some heart. Yes it lacks the storylines that have been so strong in the pervious films in this franchise but at least it has heart. The hidden family of one the Avengers that is revealed and also the budding relationship between two Avengers almost makes up for the ludicrous lines uttered to cover up the fact that neither Gwenyth Paltrow or Natalie Portman wanted to return this time around.

It is easy to see that Avengers: Age Of Ultron will frustrate many of its fans. While Joss Whedon does need to be congratulated on the epic scale of this film (although it does pale when put alongside Captain America: Winter Solider) this film simply just doesn’t front up to the brilliance of the original The Avengers. Yes the film contains love, death and violence but you won’t be remembering this film for years to come like you did Whedon’s first journey into the Marvel universe. Oh and be prepared for a bit of a morose finale that leaves the audience with more questions than it answers, keeping in mind that it has already been announced that this is the last film that will contain this line-up of the Avengers. There might be some weeping amongst true fans of the franchise.

You can hear Adam’s full Avengers: Age Of Ultron review on The Good The Bad The Ugly Film Show Ep #126

You can hear Greg’s full Avengers: Age Of Ultron review on The Good The Bad The Ugly Film Show Ep #126

You can hear Nick’s full Avengers: Age Of Ultron review on The Good The Bad The Ugly Film Show Ep #126 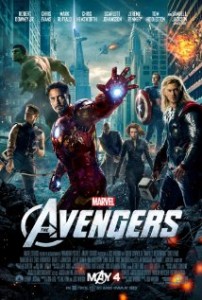